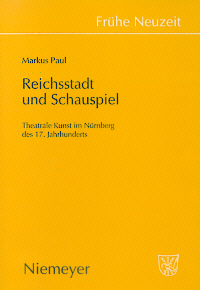 There are many ways to write theatre history. Most works in this field, however, tend to concentrate either on the shifts in paradigms and the evolution of concepts, or - in accordance with an older, though by no means irrelevant, tradition, on the the developments that took place during a limited period of time in a particular geographical location. Markus Paul's monograth on theatre in seventeenth-century Nürnberg goes for the second option, and demonstrates remarkable confidence in the subject, though it seldom ventures, regrettably, to explore parallels that go beyond the banks of the Pegnitz.

The first part of the book, apart from outlining the situation at the beginning of the century, gives the reader a better understanding of the structural constraints and normative functions of theatre in seventeenth-century Nürnberg. It is here that we learn about the role of theatre in the functioning of the 'moralischen Überwachungsstaats' (Richard van Dülmen), which was, as Paul tells us, no less prominent in the collectively-run cities than at the courts of monarchs. Not only was theatre here, as elsewhere, a usual medium for the representation of authority, the city Council was also a frequent source of funding for theatrical productions that contained political messages - though perhaps the link between funding and the theatre as another means of political communication was not so unilateral here as at rulers' courts, with the theatres in the cities having a commercial dimension to their activities. The principles on which censorship and direct or indirect control of theatre by city authorities were operating are perhaps less exciting to read about than the ingenuity with which theatre companies found ways to avoid this control - staging a performance in the nearby Fürth being one of such ways. The chapter on the polemic concerning the moral and social influence of theatre (in which Nürnberg-based authors took active part) is equally interesting, though, sadly, Paul does not see it as necessary to put the discussion of theatre-critique in a wider European context. The enmity towards theatre expressed, according to Paul, especially strongly in those parts of the Empire where the followers of Calvinism were present, surely had much in common with the hatred of theatre that culminated in the closing of playhouses in Cromwell's England; however, the reader is not provided with a comparative anlaysis of the anti-theatre rhetoric in the Protestant parts of the Empire and elsewhere.

The tendency to limit the discussion to what happened in Nürnberg, and not to provide a wider European context, becomes more obvious in the second part, which contains the bulk of the author's original research. While Paul's formal analysis of particular forms and genres as practiced in the city is very thorough, the discussion of school theatre and baroque opera is fully embedded in the Nürnberg context, so much so that relatively little or sometimes nothing is said concerning the parallels in other countries. Paul's analysis would have gained much had it dwelled longer on similarities and differences with, for instance, Jesuit school drama in the Catholic parts of the Empire, or commercial opera in Venice. One of the best monographs on seventeenth-century opera, profoundly important in the context of a city representing itself through the means of theatre and music - Rosand's Opera in Seventeenth-century Venice - is not even included in the bibliography. Against this background, the discussion of the so-called Kinder-Ballet of 1668, celebrating the link between the city and the imperial dynasty, in context with Francesco Sbarra's La contesa dell' aria e dell' acqua, is a welcome change - even though the event itself was not central to Nürnberg 's theatrical history. It is in this way - through concrete cases of borrowing, translation and reception - as reflected in his analysis of the German version of Sbarra's Il pomo d'oro produced in Nürnberg - that Paul brings into his monograph reflections of the wider world of Baroque theatre.

Owing to the author's excellent familiarity with the facts and the immediate context, confidence in functional analysis of theatrical forms and knowledge of the political background, the book is definitely worth reading.