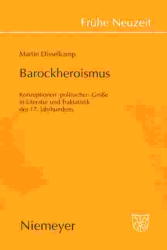 Some concepts are remarkably stubborn when it comes to putting them in context. This could be an epigraph to Martin Disselkamp's impressive survey of baroque texts, conducted with the purpose to pin down the concept of the heroic in seventeenth-century political culture. Disselkamp has undertaken the challenging task of summarising the structural elements of seventeenth-century concept of the heroic with an impressive grasp of detail and convincing knowledge of literary history background. The amount of text he analyses in order to trace how acceptable was the notion of 'political' greatness - and, indeed of 'political' behaviour as such - to various writers of the baroque era, may seem extraordinary, yet Disselkamp never slips into superficiality. His references are precise, and some of the sources he quarries for answers to his questions are relatively little studied (Johann Christian Hallmann's "Schlesische Adlers-Flügel", a minor laudatory work of a relatively unsuccessful Silesian playwright, is a good example). His methods of analysis are meticulous and sometimes original - as in the comparison of the use of "gravitas" and "gratia" in the rhetoric of "Fürstenspiegel" to the use of 'heavy' and 'light' elements in baroque concepts of palatial architecture (197-201).

Disselkamp proceeds from the need to place our understanding of the baroque notion of heroism in the context of political and ethical doctrine addressing the major issue problematised by seventeenth-century normative literature on government - the notion of "Staatklugheit". This is no easy task, as his monograph proves. It has always been enough of a challenge to trace the evolution of the heroic in the relatively disembodied discipline of history of ideas. Indeed, since Stephan Skalweit´s brilliant sketch on seventeenth-century princes as heroes, not many innovative hypotheses have been proposed in the field. To place the whole problem in literary history context, saturated with cross-references, influences and borrowings, is even greater challenge - especially if some clarity of the line of argument is to be retained. And it is only partly retained in Disselkamp´s monograph. The problem is not so much a lack of clearly formulated questions (they are clear enough), but the impossibility of the task as formulated by the author. Thus, while both Duke Anton Ulrich of Braunschweig-Lüneburg's "Aramena" and Hallmann's "Adlers-Flügel" include narrative elements that can be related to the epistemological task of 'stabilising the political whole', a full-fledged structural analysis of these very different works (and innumerable others) produces the impression of overwhelming heterogeneity, when only few (perhaps insignificant?) elements are in common. Limiting the analysis to the particular elements with which the main line of argument is concerned could have helped to make the message of the whole work clearer - yet it is not a way Disselkamp accepts.

One of the main conclusions of the book is: "Die heroische Größe, die auf der Basis eines moralischen Habitus die allgemeine Ordnung als metaphysisch begründete verkörpert, wird endlich durch den Institutionenstaat abgelöst, während sich die Moralität in das innere der Subjekte verlagert" (23). This is convincing, as long as we consider the embodiment of the holistic and metaphysically grounded order of things as the main principle underlying the construct of 'heroism'. The concept of individual political agency as such, however, is not eliminated by the institutionalisation of state. At least not if we consider the tradition of political writing represented by Locke.

Contrasting seventeenth-century "Staatsromane and Fürstenspiegel" with the later critique of heroic topoi in Lessing's plays or in "Anton Reiser", we can indeed see a particular kind of concept of political heroism eclipsed. The question is, whether this is not a mere relocation of the discourse of individual political agency from one set of genres to another - a relocation which preconditioned also the changes in the structure of the concept. Leaving out some genres in which heroic topoi were constructed and reproduced - exempli gratia baroque opera - may have been another reason why the author denies continuity to some aspects of the heroic. The so-called 'absolutist eighteenth century' which Disselkamp contrasts to the 'enlightenment eighteenth century', continued to reproduce heroic discourses of the baroque era well into the second half of the eighteenth century. Can we be certain that the effect of these efforts on the history of ideas was negligible, or is it simply difficult to trace?

These questions only serve to prove that Disselkamp's book may stimulate academic discussion on a whole range of issues. As a remarkable example of literary scholarship, it is definitely to be recommended.