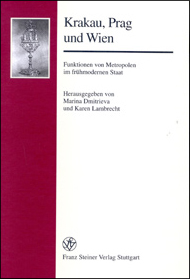 The relevance of this collection of articles, judging by Peter Johanek's introduction, is in the necessity to understand the role of cities that served as political, economic, sacral and cultural centers of Central and Eastern Europe during the early modern period. The book consists of contributions written by scholars from several fields - economic and social history, history of art, and various branches of cultural history. The first part, "Metropole und Monarchie", deals mostly with representational functions - and so does also the fourth part, "Kommunikation und Repräsentation". The second part contains articles on aspects of the economic development of Krakow and Vienna in the late middle ages and the sixteenth century. The third part examines the social and ethnic pluralism and the interaction of various groups of population in the early modern city life, while the fifth part, "Kulturtransfer", is mostly concentrated on the cultural influence of the courts.

The articles vary in the degree of interpretation: some hold tightly to their empirical material, others are more daring in promoting their hypotheses. This combination leaves on the whole a favourable impression, as the reader is not overburdened with an excess of theory or empirical evidence. Thus, the articles of Kurt Andermann ("Sacrale Funktionen der Hauptstadt") and Arnold Bartetzky ("Die Beziehungen zwischen Stadt und Krone im Spiegel von Rathausdekorationen") are limited to the discussion of peculiarities of the state functions of church architecture and city hall decorations respectively, while the article of Matthias Müller ("Der Anachronismus als Modernität") promotes a rather daring thesis on the relevance of 'old-fashioned' Habsburg court architecture within the culture of "Gedächtnis". The articles dealing with the plurality of ethnic communities in late medieval and early modern Krakow are a valuable contribution to the modern vision of the region's past as essentially multicultural.

Some tendencies in the scope of research represented in the book deserve a special commentary. While it is perhaps impossible (and not necessarily desirable) to avoid heavily researched topics like the cultural life of the courts of Rudolf II and of the last Jagellonian queens altogether, it would be perhaps more interesting to see more articles dealing with other aspects of culture/representation in the region. The potential for integrating high quality research on various topics dealing with separate aspects of representation (ephemeral architecture, city hall decorations, façade decorations, court ceremonies), which, as the book demonstrates, definitely existed within the group of contributors, has not been exploited. Thus the result is more fragmented than it should have been. The discussion of social and ethnic pluralism in Central and Eastern European capitals is somewhat unbalanced and heavily shifting towards Krakow - while it is hard to imagine that the same topic is less relevant for Vienna and Prague.

As a valuable resource for future scholarship, the book provides the reader with a wealth of information related to the life of early modern Krakow, Prague and Vienna, without offering (perhaps intentionally) any general hypothesis concerning the role of the capitals for the development of the region at large. Marina Dmitrieva's and Karen Lambrecht's concluding article ("Funktionen von Metropolen im frühmodernen Staat. Eine Zusammenfassung") is really only a "Zusammenfassung", rather than a theoretical synthesis of the contributors' material. While almost every separate article seems to offer interesting findings or a new reading of intriguing questions in each specific field ("Der Anachronismus als Modernität" is a fine example of the latter), no impressive general concept of an east-central European 'Metropolis' emerges.