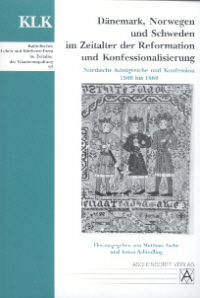 This compendium of four extended essays treating the religious and political history of Scandinavia from 1500 to 1650 adds another piece to the picture of European Reformation and confessionalization in a series initiated by Anton Schindling over ten years ago. Except very occasionally, none of these essays explicitly address the terminology of confessionalization - a sign of its continued widespread acceptance. The essays reflect a predominant strand of thinking on this phenomenon: the tendency that unites Heinz Schilling's emphasis on the developing alliance between church and state and its effects on the state's administrative role, and Wolfgang Reinhard's work, itself a re-assessment of Ernst Walter Zeeden's "Konfessionsbildung", which considered confessionalization as a particular form of social disciplining. Thus the essays are heavily focused on political and ecclesiastical history and church-state relationships. Despite discussion of the developing absolutist states after the Reformation, the essays also reflect the retreat from the relationship of the confessionalization paradigm to nascent modernity that characterized early programmatic work. The essays are intended as a handbook introduction to the history of the Scandinavian countries. Attractive features of the volume in this vein include lists of rulers, bishops, and other dates and names, in both Scandinavian and Latinate forms, and an excellent series of maps.

An introductory essay by Matthias Asche organizes the problems and patterns of Scandinavian church history as an ongoing transfer and interaction between center and periphery. This schematic is useful when one considers the position of Scandinavia on the margins of Latin Christendom and its later relationship to theological centers of Lutheranism in Germany. Moreover, the concept well describes the strong divergence between the cities of Denmark, Norway and Sweden and their rural hinterlands in implementation and reception of the Reformation. The Reformation in Scandinavia moved out into the countryside much more slowly than it did (for example) in Germany. But Asche's suggestion that the Scandinavian countries offer an example of "delayed confessionalization" is somewhat less persuasive. Asche relies on Schindling's exposition of this idea, but Schilling himself, the first to propose a periodization for confessionalization in 1988, has been increasingly persuaded by an onset of the tendency in the later sixteenth century. Evidence offered by a growing number of social and cultural historians (Marc Forster, David Mayes, Hartmut Lehmann, Nicole Grochowina, Benjamin Kaplan, etc.) further suggests that the effects of confessionalization in the arrival of confessional identity, insofar as that happened, should be dated perhaps as much as a century later, if they are found at all.

Jens E. Oleson's essay on Denmark, Norway and Iceland presents an abundance of valuable material most successful in treating political and administrative developments. It convincingly traces the interaction between government and church under Frederick I and Christian III, and its discussion of universities, Bible translation and humanism, though brief, is illuminating. Traditional social history is also well-represented. Oleson offers numerous opportunities for European comparisons in his discussion of the peasantry, land tenure and peasant revolts. Somewhat less well developed are themes relating to the interaction of theology and politics; a very short section on poor relief and its relationship to social discipline exemplifies this problem. Theologians may quibble with the suggestion that Philippism primarily constituted a divergence from strictly Lutheran teaching on Law and Gospel, and the conclusion that Lutheran theology provided theological support for the political status quo has been successfully challenged, at least for the German case, by Robert von Friedeburg and others (I was also confused by the translation of "Konkordienbuch" as "Buch des Trostes"). Werner Buchholz's essay on Sweden and Finland has similar strengths in the political and administrative aspects of confessionalization. A clear picture of the relationship between Swedish land tenure and ore production and the politics of the kingdom emerges. Ecclesiastical politics are also usefully explored. Buchholz presents a detailed discussion of the matter of the allegedly unbroken Swedish apostolic succession, which has continued to play a role in German Lutheran politics and ceremony up to the present. The narrative of his account is robust, particularly in the amusing account of Gustav Eriksson's problems both as a prospective member of the Schmalkaldic League and potential suitor for a noble Lutheran bride. Both Oleson and Buchholz focus on the elite aspects of confessionalization, and have less to say about religious life or piety.

A final short essay by Tore Nyberg is well-placed to address this gap and outlines the "religious profile" of the territories. It adds valuable detail to the other essays by expanding our picture of religious life within the orders, the concrete effects of the Reformation on the institutions of the Old Church, and the stalled Counter-Reformation. It also provides a subtle corrective to Oleson on the matter of church-state relations in Lutheran theology. It says little, however, about religion outside of cities, cloisters and palaces. Like Buchholz and Oleson, Nyberg refers repeatedly to the persistence of paganistic and Old Church customs in the countryside without providing many details.

Of course, no handbook essay can address every aspect of a topic. Still, these essays taken together raise two issues for reflection. First, despite Asche's note that the Scandinavian Reformation bore a strong resemblance to events in England, none of the authors pursue this matter. For instance, when discussing the matter of the secularization of church property, Buchholz provides a comparison to the very different situation in Germany. Here a discussion of the similarities to England would have been useful; in England the Reformation also came slowly to many remote areas, as Eamon Duffy has argued. Such analysis points out the extent to which the history of the German territories has contributed to the development of the confessionalization paradigm and still influences its application. Secondly, the elite focus of these essays neglects an alternative direction of thinking on confessionalization, that of Heinrich Richard Schmidt, who has stressed the role of local populations in seeking confessional conformity and cooperating with or initiating social disciplining. This is an intriguing question considering the resistance to royal prerogatives and directives, especially in the Swedish countryside, occasionally discussed in these essays. Did ordinary Scandinavians ever cooperate with confessionalization when it arrived, and to what extent?

If we ask of the book the questions that Reinhard asked over a decade ago about the relationship of confessional influence to modernity, we might conclude that the extraordinary confessional homogeneity of Scandinavia in later centuries can be attributed not only to the Scandinavian absolutisms, but also to the special quality of the elite Scandinavian Reformation, which did not move aggressively into the countryside until well after it consolidated its gains in the cities. If the essays in this handbook are representative, however, the relationship of this homogeneity to popular responses to Reformation in Scandinavia apparently remains to be written.