Felicia Roşu (ed.): Slavery in the Black Sea Region, c.900-1900. Forms of Unfreedom at the Intersection between Christianity and Islam, Leiden / Boston: Brill 2021

Leslie Peirce: A Spectrum of Unfreedom 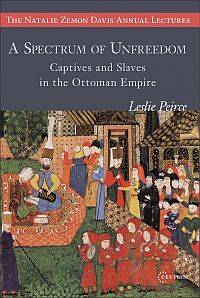 In her latest publication, Leslie Peirce, a Silver Professor and Professor Emerita of History at the NYU with a research focus on gender and women's history, law and society of the Ottoman Empire, addresses the recently popular topic of unfreedom in the Ottoman Empire. This book emerged from the lectures that she gave in 2015 as part of The Natalie Zemon Davis Annual Lectures at the CEU (at that time still located in Budapest) organised by the Department of Medieval Studies and the Department of History and given to an interdisciplinary audience. The three chapters of work are based on the three lectures, formed around a thematic focus on slavery and captivity.

In the first chapter ("An Overview of Ottoman Slavery") Peirce provides a useful introduction to the institution of Ottoman slavery. She touches on many aspects to provide the reader with a vivid picture, telling of the different regions where the captives came from, their very different lives and duties, which depended so much on their owners, the diverse backgrounds of the owners, who were not only from the upper classes, the different forms of enslavement (e.g. contracted slaves), the prominent role of manumission and the available opportunities for upward mobility.

Furthermore, the author early distinguishes between slaves and captives, explaining on page 1 that by slaves she refers to 'persons legally owned by subjects of the empire who ranged across different social and economic classes' (1). Captives, by contrast, she uses as a generic term for numerous other persons who were in some form of captivity. Here, Peirce suggests that we consider captivity to be on a spectrum of unfree persons (or of unfreedom as used in the book title) to deal with the countless terms for those in bondage in addition to the various terms for slaves. To map out different forms of this spectrum, the author devotes her chapters not only to legal slaves in rural and urban domestic service but also to the unseen victims seized mainly by raiders and bandits, as well as to slaves in service to the Ottoman dynastic households (kul). This approach fits well with other ongoing discussions regarding the differentiation of the terminology used for bondage and other concepts regarding no longer viewing these dependencies as bipolar dichotomies between free and unfree but rather as exhibiting various nuances on a larger scale. [1] It has also become apparent in the course of reading that it is not a straightforward proposition to clearly separate these terms, as in general, boundaries are blurred and categories overlap at times.

According to Peirce, the most significant difference between legal slaves and the large number of people who found themselves in other circumstances of captivity lies in the lack of documentation for the latter, while the former were registered by their owners with the authorities. As the fate of most captives is therefore not recorded, it cannot be traced, which results in the fact that these unfree people receive much less attention in research than registered slaves. It is precisely this group, however, that Peirce wishes to pay attention to in her booklet, portraying the numerous captives within the empire who do not fall into the classic category of slaves.

Beyond this lack of balanced documentation, which naturally brings into question the representativeness of the research, Peirce draws attention to another issue that researchers on Ottoman slavery have to face: The discrepancy between the theoretical basis for the treatment of and regulations regarding the unfree and the actual implementation. That is, legal documents provide information about how something is mandated to be, but it says nothing about how it actually was.

However, the author can be certain, that the slaves were essential in providing labour and prestige, as they were, for example, important for household reputation and investment. Furthermore, the author underlines the difference between female slave owners, for whom slaves served as justification and execution of business in the public sphere, and male slave owners, for whom the slaves meant prestige.

Peirce also answers the common question whether the unfree were aware of their rights, saying that one can assume that it was not unusual for ordinary individuals to know the basic principles of law. Nevertheless, there were differences that depended on a range of aspects, such as proximity to the legal authorities and the owner's standing in the local hierarchy. In Istanbul, for example, it was much easier for slaves to go to court than in the provinces. When Peirce therefore speaks of 'different legal histories,' (30) she is referring to the disparate treatment of slaves, which, even if the legal requirements were based on the same foundation throughout the empire, may have differed greatly in practice, as a results of local regulations.

The diversity of Ottoman slavery is evident through the range of approaches to classification developed to distinguish groups of slaves from one another. Elite slaves are usually referred to as those educated in the palace and who were allowed upward social mobility. What Peirce describes as 'an elite class of slaves' (31) were the most capable contracted workers, who played an important role in the economy. Here, too, it is clear that the use of terms and categories is determined by their definition.

The fact that there were numerous invisible captives in the historical record leads the author to turn, in her second chapter ("Captives and Their Captors"), to the phenomenon of captive-taking, together with its causes and the handling of its outcomes. She therefore examines actors in the captives' environment, such as local authorities, government policymakers and enforcers and the law itself. Peirce sheds light on the criminality that affected the lives of individuals and the local population by highlighting the history of Ottoman petitions, comparing petitioners from the provinces and the imperial authorities.

Drawing on individual case studies from the archives and other sources, the author allows a representation of a wide range of captives, both adult men and women and girls and boys, most of whom were victims of raids in their homes and fields, although others were captured from small towns and on the open road. Finally, still others were acquired in black markets that operated outside the official slave markets.

In short, for Peirce, captives were 'slaves who lacked both rights to legal protection and visibility as accepted members of society' (41). On the one hand, this reads as if the captives were a subgroup of slaves, when in fact both slaves and captives are examples of forms of the unfree. Aside from this definitional confusion, this is nonetheless an interesting point, as it gives a definition not only to captives but also conversely to slaves to distinguish them from other unfree groups. Accordingly, slaves were officially recognised, had rights, were accepted as part of society and were visible in it.

From the example of the city of Aintab, on which the author has already done extensive research, [2] she shows the differences between regional and imperial networks and practices, as well as the assimilation of distant territories. In this way, she works through the various strategies that Sultan Suleyman has employed to counter local crimes of violence. Registering and taking over the administration of the foundations and the estates attached to them helped the state combat local criminal activity and ensure, for example, greater safety on the streets by controlling the zaviyes (spiritual retreats).

On the other hand, she also raises the question whether the abductions were simply the act of desperate people or criminals or whether they can be the reaction of individuals towards authorities who were denying them their support. Peirce concludes that 'abduction was the most commonly understood response to the denial of expectation' (76).

In her last chapter ("Voices of Captivity in Legend, History, and Law"), Peirce explains that more of the own subjects fell victim to captivity in what she calls the 'age of brigands' (80) because of the declining numbers of captives taken by the Ottomans in foreign wars during the end of the 16th and the beginning of the 17th centuries. In this chapter, the focus is on the representation of captives and slaves in a range of source materials. The author draws attention to the fact that historians of the 15th and 16th centuries included abduction tales in their works on the House of Osman. A common issue was the abduction of the enemy's dependents, which in turn was associated with power.

Abduction as a public assertion of power, however, was used by opponents of the government's vision of order, as Peirce concludes. In Anatolia, heroic tales of people who resisted the government spread. Some of these heroes have entered history as notable bandits who did not harm their victims. Finally, the author raises the question whether these crimes (violence and resistance) could be seen as a justifiable response to misgovernment.

The court records of Harput, a provincial capital in Anatolia, include a series of entries documenting the claims of more than 20 individuals and families who accused a cavalryman of having done violence to them. Here, Peirce demonstrates another form of imbalance, regarding the criminal activities of an urban brigand' (105) that are evident in court records. The author again highlights the relationship between the centre and provinces, where the more isolated cities allow their leading figures more room to manoeuvre away from central dictates that might lead to the unjust treatment of individuals and also affect the state.

By choosing an overarching term as a criterion for investigation and giving attention to other categories of unfree people beyond slaves, the author can include individuals who would otherwise have fallen outside the scope of the study. This provides the reader a much broader picture of slaves and others in bondage and shows the range and diversity of forms of slavery and captivity that existed in all areas of the Ottoman Empire, urban and rural, elite and non-elite. This approach highlights how the use of certain terms and categories can open up or in other cases limit research topics and lead to the inclusion or exclusion of other important subjects from the researcher's focus.

In short, this small book is a useful introduction to the subject of slavery and captivity in the Ottoman Empire, provides a useful overview of its characteristics, and presents interesting directions for further research. Finally, questions that arise from reading this book that may reward further study include the following: What happened to the slaves who went through the 'transition state' after being manumitted? Should slavery really always be defined in the context of labour, or does it make more sense to classify slaves according to their function? Might it also be of interest, instead of looking only at the agency of slaves, to examine how slaves shaped the agency of others, especially their owners?