Doris Behrens-Abouseif (ed.): The Arts of the Mamluks in Egypt and Syria - Evolution and Impact, GĂ¶ttingen: V&R unipress 2012

Felicia Roşu (ed.): Slavery in the Black Sea Region, c.900-1900. Forms of Unfreedom at the Intersection between Christianity and Islam, Leiden / Boston: Brill 2021

M'hamed Oualdi : A Slave Between Empires 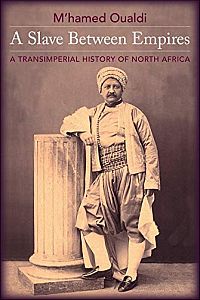 Is it possible to write a transimperial history while taking a microhistorical approach, and can the story of a particular person be used to elaborate political and diplomatic conflicts? Oualdi's book A Slave Between Empires shows that this is indeed possible. M'hamed Oualdi, a full professor of history at Sciences Po-Paris, with a research focus on early modern and modern North Africa, especially Ottoman Tunisia, slavery and abolition, structures his book on a legal conflict over an inheritance around a former slave named Husayn Ibn Abdallah. The author uses the case involving this man, complicated by the involvement of several countries and people, to present an alternative view of the history of North African society that extends beyond the traditional colonial framework. Here, the web of imperial and international connections and actors involved in the dispute is transimperial, as are the factors that converge on this one person, as they also determine the history of the Maghreb.

The protagonist of the story, General Husayn Ibn Abdallah, was a former slave of Circassian origin, captured as a child and brought to Anatolia. Later, in the Ottoman province of Tunis, where he spent much of his life, he was in the service of governors (beys). As a general, dignitary and minister of the Tunisian regime, he came into wealth and became entrusted with political missions to Istanbul and to European countries, including Italy, France and Great Britain. He left Tunisia after the beginning of French colonisation in 1881, and he died in exile in Tuscany in 1887, leaving a fortune behind. This fortune lead to disputes after his death. Most of the monograph is devoted to this conflict, using it to provide a new approach to the history of North Africa beyond the tight corset of colonial history and as part of the history of the Mediterranean. Oualdi's use of an extensive corpus of sources is impressive, drawn from numerous archives spread across several countries. They provide information on the estate of Husayn Ibn Abdallah and their dispersal gives an idea of how entangled the whole matter is.

Oualdi spends the first of six chapters presenting the life of Husayn Ibn Abdallah, from his capture, through his education, to his time as an Ottoman dignitary in Tunis and as a representative of Tunisia in Europe and then his days in exile in Tuscany. Husayn Ibn Abdallah, was one of the last male Circassian slaves sold to the Tunisian governors before the Ottoman reforms that were shaping the empire and its provinces at that time. The author describes the connection between personal and official circumstances, such as Husayn's education career. He studied the Qur'an, as was customary for Mamluks, and underwent training at the Bardo Military School, which, like the other Ottoman institutions, was designed to produce officers and civil servants who would be in charge of the army, administration and state courts.

To show that Husayn's life did not depend on the increasing confrontation with Europe or the emergence of nation-states, Oualdi foregoes the common presentation of history, characterised by 'colonial domination or a national framework of analysis,' and chooses 'a Mediterranean or international perspective' (13). He succeeds in this by drawing on a wide range of source material (such as legal deeds, travelogues, private and administrative correspondence) to examine events from different perspectives and link them to the period before and after colonisation.

The author deals with a highly interesting debate regarding private and public ownership in the second chapter of his book. Husayn Ibn Abdallah's inheritance is the occasion of a dispute among several international parties who lay claim to it, including the Ottoman Empire, which continues to see Tunisia as its province and Tunisia's inhabitants as its subjects. This intertwining of diplomatic and personal contestation is among of the reasons why there are numerous written records for the different sides, as Oualdi notes; he himself makes extensive use of them for his study. He also argues that the consideration of colonial dispossession in the late 19th century should be seen as taking place in a broader context; after all, changes here occurred before and also after this period on a global scale. Again, the presentation of the history of the region in a way that goes beyond the traditional colonial framework and places it in a broader context is among the main concerns of the study.

In the third chapter of his book, Oualdi links Husayn Ibn Abdallah's case to those of two Tunisian dignitaries who fled to Europe after embezzling public funds. In this tale, Husayn appears as a mediator, first in Paris and then in Livorno. Using these cases, along with Husayn's, Oualdi points to the increasing financial and legal entanglements between Europe and Tunisia that preceded its colonisation, a phenomenon that the author considers to have received far too little research attention to date. By paying close attention to these cases, the author also shows how matters such as these influenced individuals' agency and shaped the intervention of European countries, demonstrating broader historical changes in the Mediterranean. He refers to the extensive written materials produced in the course of these affairs, including in Arabic, which contradicts the common opinion that there are few sources from this period in this language. Furthermore, Oualdi draws attention to the numerous sources that also exist in European languages and that can be used to research Islamic legal issues.

In the second part of the book, Oualdi deals with the legacies of Husayn Ibn Abdallah and the far-reaching conversations that arose out of them. On a diplomatic level, these involved the Ottoman authorities on the one hand and the French and Italian ones on the other, with all laying claim to Husayn's property. The various sides concentrated on different aspects, such as Husayn's nationality - he was buried first in Livorno and transported later to Istanbul. Among those who had a connection to Husayn on a personal level and who laid claim to his inheritance, were the governor (bey) of the province of Tunis, two European mothers whose daughters Husayn raised in Livorno, a well-known Tunisian scholar and his sons who were close to Husayn and an Algerian Jew who had served him for a decade. Husayn had no descendants of his own. Oualdi takes the various groups (Ottoman provincial elites, European women, Tunisian scholars and North African Jewish communities) and their agency as a point of reference to explore the history of modern North Africa from different perspectives and to convincingly counter existing perceptions. By this means, he addresses, for example, the influence of the governors in Tunis and their networks and examines the common assumption that they were powerless and under the tutelage of the French. Oualdi also describes the important role that households had in society both before and during French colonisation. Aspects like these are described to reveal dimensions that are often overlooked in the history of colonial Tunisia.

In the final chapter, Oualdi addresses the question of who finally emerged as the winner from the inheritance disputes, and here the circle closes in a description of the beginning of Husayn's career as a slave. Even though France emerged as the diplomatic winner, taking control of Husayn's estate and private papers, it still needed to come to terms with Ottoman provincial practices. After all, Husayn was a manumitted slave, and therefore regulations such as contractual clientage applied, which affected parts of his estate. The private winners were one of the women whose daughters Husayn had raised and the sons of the scholar who were close to him and entrusted with the administration of his foundation, who now were able to assert their rights over the foundation. Oualdi shows the impact that this estate dispute had on Tunisian legal practices and the social and political dynamics there, as well as on archiving processes during the colonial period more generally.

Even if there is a risk of not showing a representative image when dealing with broad topics from a single case study, Oualdi tells a compelling story by tying the life of an individual to political and social realities and providing a representative example for illustrating various wide-ranging networks that spin around a single person. He adopts an approach that questions previous accounts of the history of the Maghreb and opens it for a new interpretation. This study relates to examples that seek to view the Mediterranean as one region across other, predetermined boundaries. It is also a wonderful example of recent work on mobile actors and the shaping of space. [1]

The study also touches on various aspects of slavery. To begin with, it presents a striking example of what careers were possible for some former slaves and what social position, political importance and level of wealth they could reach. It also allows us to see what insights ego documents of slaves can provide and how fruitful they are for research on topics such as their own perception of and placement in society. Oualdi's book furthermore helps orient the issue of the abolition of slavery, discussing the balance between the intervention of Europe and emic aspirations. Moreover, the study also provides information regarding the complexity of rights of inheritance pertaining to freed slaves and issues of patronage. We hope to see more such projects on slavery, in particular using slave voices and slave testimonies.

Using images, maps, a glossary, an index and an extensive bibliography, "A Slave Between Empires" is an impressive study that demonstrates how different strands converge in one person and how far-reaching processes can be illustrated. It will be highly interesting to see how the life of an individual was determined by political and diplomatic realities, as well as the impact that this person had on the lives of others and on broader circumstances. Through the legacy of one person, the author skilfully demonstrates interconnections of the private and the public, as well as those of the various powers intervening in the Maghreb at the end of the 19th century.

[1] On this see the Priority Programme 'Transottomanica' funded by the German Research Foundation (https://www.transottomanica.de/).