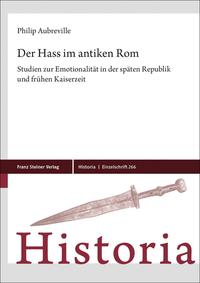 This revised Humboldt University dissertation falls into two major parts. The first includes a survey of research on emotions in general and hate in particular, while the second focuses more narrowly on ancient Rome. Philip Aubreville adopts a proper balance between approaches that treat emotions as hard-wired and those that allow for considerable influence of social and ideological factors (the brain itself may be shaped by culture, 68). He is fully aware that the object of investigation is the expression of emotions, which is adapted to particular circumstances and intentions, rather than the sentiments themselves (61-63). Hate (or hatred: in English the choice of terms is problematic) is to be distinguished from enmity (72), as well as from disgust. What is more, emotions are dynamic processes, and so are better represented as scripts rather than as momentary events. Hate thus begins with certain perceptions, and culminates in a desire to harm or exterminate the offending person - most often a person, since hatred of objects is to a large extent a metaphorical extension of the emotion, by which human characteristics are ascribed to animals or inanimate things (109; cf. 119, 125). Hate is also related to love: just as love was understood to be motivated by virtuous qualities, so too hate was thought to respond to vice, as Aubreville notes (121).

Aubreville goes on to analyze the way the Latin vocabulary for hatred is deployed, treating in turn hatred among animals, hate on the part of gods, and group hatreds, before turning to the objects of hate. The latter may include types of people (as distinct from anger, which according to Aristotle was strictly personal), for example deviant individuals (132; cf. 197 on Ovid's Ibis; 207 on sexual deviance), those whose interests conflict with our own, those of a different social status, and more. Reactions, in turn, run the gamut from wishing harm and outright murder (though these responses may reflect other negative emotions as well, 139), to destroying items associated with the hated person, such as statues - an anticipation, Aubreville suggests, of the so-called Streisand-effect (143). Aubreville also catalogues verbal expressions of hate, along with gestures, which are harder to be sure about. Another response is ostracism (in the modern sense), which of course occurs today, though less often in the form of exile (155), or else simple avoidance. A further aspect of hate is that it tends to be more enduring than some other emotions, rendering it something like a disposition (162).

The preceding overview is thorough and useful, but I found more interesting and innovative the following chapters, on the aristocracy as an emotional community, in the phrase coined by Barbara Rosenwein, with special attention to hate. Aubreville is alert to problems involved in applying the notion of emotional community to the ancient Roman elite, both because of the nature of our sources and because hate is a "problematic emotion" (174), partially subject to taboo (175) and, like emotions generally, and anger more specifically, requiring a certain degree of control. Even apart from Stoic prescriptions of apatheia, expressions of hatred could land one in trouble, whether in the competitive world of the late Republic (204-205) or the autocracy of the early Empire. There were situations, nevertheless, in which an expression of hate was called for, even if the emotion was simulated, just as there were others in which hate had to be dissimulated or masked. Tyrants were notoriously regarded as subject to extreme emotions, hatred and anger prominent among them, and the all-powerful rule of the emperors was a cause of a general anxiety among the elite. How to manage and survive under such conditions was a constant concern, most vividly depicted in Tacitus' Agricola. In turn, hatred of tyranny (odium regni) was a deep-seated Roman value, even a duty (220, 224), given expression especially under the Republic but continuing into the Empire, especially when it was safely directed at bad, and now deceased, emperors, as in Pliny's panegyric. Hatred of enemies was more openly expected and approved of in pre-Christian Greece and Rome, but even there, within certain limits. War was a natural catalyst for negative emotions (199), and just as the Romans could speak of righteous anger (iusta ira), so too appropriate hatred was deemed acceptable - and might even be encouraged. Although Aubreville reasonably limits the temporal scope of his study, one might have noted that Christian writers, such as Lactantius, insist that God and all righteous people must hate sin in the same measure that they love virtue.

The final chapter, titled "Zeigen oder Schweigen" ("Reveal or Conceal"), examines strictures to control hate and its expression. Education, or, as Aubreville puts it, socialization (239), is a factor, to be sure, though natural dispositions to intense emotions varied. One also learned to guard against hate or hedge it round, for example, by displacing it on to a different, and safer, object or third person (253). Romans also were adept at concealing their feelings, donning a social mask (254-255), a practice not without value in lubricating social relations. But one might equally be called upon to demonstrate hostility, for example toward public enemies. It is just this tension that renders hatred ideologically complex, and different social formations or emotional communities will exhibit distinct variations in the subtle balance between the two extremes.

Whereas hate (as in "hate crimes") has been the subject of investigation in recent years, much less attention has been paid to this emotion in classical antiquity. I might have liked to see some further discussion of the dehumanization of the object of hatred, especially in connection with genocidal violence, a tendency that I believe is more pronounced today than in classical antiquity. But this is a quibble. Aubreville has provided an excellent analysis of the workings of hate in ancient Rome, up-to-date in method and rich in illustrative examples, which are discussed with a fine eye for detail and philological precision. The book is a valuable addition to the ongoing investigation of emotions in classical antiquity.