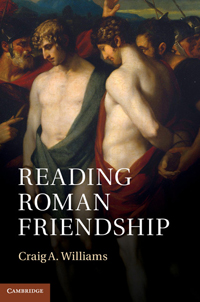 Why "reading" Roman friendship? In part, "reading" reminds us that we cannot know how ancient Romans actually felt or thought: we know them through their texts, taken in the broad sense to include images as well as words. As Williams writes: "I am suggesting, then, that we read any given use of the language of amicitia as, in the first instance, the application of linguistically and culturally meaningful labels rather than as a transparent window on to biographical or psychological truths" (44-45). But texts also have their own codes, which vary according to genre. One of the great advantages of Williams' learned and elegant study is his thorough treatment of epigraphical evidence, in addition to what we think of as literary. Williams is careful not to privilege the speech genre (his label) of inscriptions over others; as he puts it: "I read inscriptions, like other texts, less as windows onto biography than as illustration of the workings of a system of linguistic signs" (96). But Williams demonstrates convincingly that the epigraphical and literary texts construct substantially different pictures of how friendship was negotiated and conceived in ancient Rome, not least in respect to gender and class relations. It is not too much to say that Williams' careful attention to inscriptions, along with his sensitive interpretations of literary and philosophical texts, will transform in fundamental ways the prevailing conception of Roman amicitia.

Williams adopts what he calls the "heuristically naïve assumption" that when "writers of Latin texts refer to a relationship as amicitia or describe a person as someone's amicus, then ... it is amicitia and they are amici, regardless of what else they may be" (54), unless there is some explicit indication that the terms are being employed in a transferred sense. Take gender: literary texts leave the impression that the term amica, when employed by a man, signifies a sexual partner, often of the class of meretrices: "In genres ranging from drama to epigram to courtroom speeches, when a woman is linked with an amicus or a man is said to have an amica, what is not merely connoted but directly denoted is a sexual relationship apart from marriage" (80). And yet, to conclude that genuine friendship between men and women was not recognized in ancient Roman texts would be a grave error: "In stark contrast to the language of amici and amicae in literary texts, that of the speech genre of inscriptions uses the terms symmetrically ... the body of surviving inscriptions makes it clear that men and women - slaves, freed, and freeborn - could and did commission texts commemorating both men and women as their amici and amicae with no hint of denotative distinction among the various configurations of gender" (96). The evidence that Williams assembles is incontrovertible, and yet he cautiously refrains from assuming that this corpus provides a truer image of Roman friendship; ambiguities remain, and in any case we do not know "the full denotational, connotational, and tonal range of words like amicus and amica across all speech genres of Latin as spoken and written by men and women of all social backgrounds" (113).

In the chapter devoted to love and friendship, Williams rightly observes that it is particularly risky to assume "that amor and amicitia directly correspond to English love and friendship" (123). Ovid, for example, cites the bond between Orestes and Pylades as an exemplum veri amoris (Tristia 4.4.71), without the least hint that there was a sexual relation between the two. And yet, in other contexts, "we find amor openly contrasted with amicitia" (125, citing e.g. Ovid Ars Amatoria 1.719-22). One might have supposed that the noun amator (or the substantive participle amans) had a more narrowly sexual connotation, but this too would be a mistake: "An epitaph from Vienne in southern France memorializes the departed as one who loved his friends (amicorum amator)" (127), and in graffiti the term is used also of supporters of candidates for office. Rather than posit a contrast between amor and amicitia, Williams seeks to "describe a range of combinations and recombinations, configurations and constellations" (130) that obtain between the two terms. Williams examines the way the terms are applied to relations between women, to married couples (where the language of friendship is rare), and to love between men, where amicitia, as opposed to amor, is "rarely named in connection with Greek-style pederasty" (140). The relation between brothers and sisters was decidedly not conceived as amorous, and yet "the language and imagery of sibling love ... could be associated with a range of experience which could include the erotic" (162); here, I may note that I am inclined to see the homoerotic use of frater in Petronius as exceptional rather than as reflecting "a longer and deeper history" (164; I doubt, for example, that Catullus 100 betrays even a hint of such a usage).

Departing from the thematic treatment of amicitia (men and women, friendship and love, and a final chapter on funerary inscriptions), Williams devotes Chapter 3 to "authors and texts," and offers close readings of the language of love and friendship in a variety of literary forms, from Catullus, Virgil, Horace and Propertius to Petronius and the correspondence of Cicero and Fronto. The arrangement is a reminder that Williams is "reading" friendship, and is ever alert to generic conventions. He is especially sensitive to the ambiguities that are the stuff of Roman poetry. Thus, when Propertius says that he and Gallus are driven by their "shared love" (socio amore, 1.5.29), Williams asks: "For whom?" (202), and notes that the phrase may suggest their common love for the same woman or else their mutual affection for one another (cf. his similar query concerning the sense of pro continuo amore in Propertius 1.20.1 [209]). I disagree, however, with his reading of Catullus 109: first, I do not think the poem "restates amor in terms of amicitia" (178), but rather contrasts the iucundus amor or "pleasant affair" that the addressee promises will be everlasting (but which Roman readers would have recognized as intrinsically transient) with the commonly accepted durability of a foedus amicitiae; and second, the suggestion that the addressee need not have been Lesbia or even a woman at all strikes me as oversubtle. True to his idea of "reading," Williams treats Cicero's letters not as evidence of love and friendship as such but as "Cicero's performance of interpersonal relationships in his private correspondence in and through language" (219), and he shows clearly how "the vocabulary of amor and desiderium, the imagery and yearning and burning, the implicit and explicit comparisons to the realm of what in Greek is called τà έρωτικά, were all characteristic of the speech genre of letters exchanged amongst Roman men of a certain standing" (243; note the cautious qualifications). The epistles exchanged between Marcus Aurelius and his tutor Fronto nevertheless seem to go a step further; but was their affection something more than friendship, as Amy Richlin has argued? Possibly, but Williams notes that their "language fits smoothly into longstanding textual traditions not only of amor but also of amicitia" (250).

The final chapter deals with funerary inscriptions that involve amicitia: who dedicated them and to whom, who read them, how they were distributed within a burial complex and across the Roman Empire. The chapter concludes with a lengthy typology, classified according to whether one person, or more than one, commemorated a friend; whether the commemorated friends were part of a group and if so whether they were kin, or freedmen, or kin and freedmen, or former masters; cases where the amici were unnamed or where a pair of friends (sometimes women) were buried together. There are, of course, other ways to organize this material, for instance according to the relative class or gender of the parties, though within each category Williams discusses these and other parameters. From the evidence that Williams sifts and presents with consummate care, it cannot be doubted that slaves and masters, men and women, could and did refer to each other as amici, and that the only sound interpretative method is to assume that "they are amici," and that the term amicus is not in itself a metaphor or euphemism for some other relation such as patronage or concubinage - at all events, within this "speech genre."

The above is only a bare summary of this remarkable book. It is scholarship at its best, and anyone interested in ancient Roman friendship will want to read it.