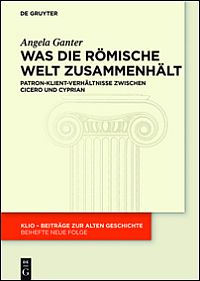 Composing a history of the patron-client relation in Rome over the four centuries that separate Cicero and Cyprian poses a special problem: how does one treat an apparent institution which, perhaps from the very beginning, had only a vague status in law or even custom, but served as a metaphor for various informal social bonds that did not have a proper terminology of their own? The answer is to attend carefully to nuances in mentions and descriptions of patronage and to treat the relationship as a literary critic might do, rather than in the manner of a political historian. That is the approach that Angela Ganter adopts in this detailed and richly documented survey, in which she attends especially to the way the patrons and clients appear in Cicero's orations and philosophical essays, in the Commentariolum consulatus petitionis ascribed to Cicero's brother, in Plautus and Terence, Ennius, Sallust, Caesar, Livy, and Horace (including the Panegyricus Messallae, the Elegiae in Maecenatem, and the Laus Pisonis), in Martial and Juvenal (with a side glance at Seneca), in Pliny the Younger and Fronto, and finally in Cyprian, bishop of Carthage. Along the way Ganter also considers some Greek texts, especially Dionysius of Halicarnassus' Roman Antiquities, which offers an idealizing definition of the relation, and asks further why it fails to be mentioned in Polybius.

It is clear that patronage was an asymmetrical relation between people of different social classes, and that it involved some degree of reciprocity, with an expectation of durability; whether it was strictly voluntary seems questionable to me (9-15). There was certainly an element of noblesse oblige on the part of the aristocracy, which can be seen as altruistic, although there was recompense in the form of prestige; there was also an affective dimension, as Cicero sometimes chose to represent it (35). Patronage was a fertile domain for euphemism. Services rendered to fellow senators, as in Cicero's defense of Plancius, established horizontal bonds as well, but gratitude could constitute a debt and hence a burden. All this lends itself to a conception of patronage as a kind of illusion or misrecognition, like Pierre Bourdieu's conception of habitus (64), but one must tread warily here: values have a real, if subjective, existence.

We might expect that patronage would be caricatured in comedy, not least because comedy presented a Roman overlay on Greek patterns. Plautus does expose the greed that often underpins the relation, and the parasite serves as a negative image of the client (96). Terence gives a different picture, emphasizing the subversive nature of his parasites (101). Ennius more soberly places the accent on mores and fides, and Polybius, for what his evidence is worth, speaks rather of philia, unsurprisingly given the absence of a developed vocabulary of clientship in Greek. Livy, like Sallust (and Dionysius), understands the Roman people to be divided into two fundamental classes, between which it is concordia, rather than amicitia, that constitutes the fundamental tie. Patronage is built into this system, and, I would say, inhibited the emergence of friendship as an image for social solidarity. All this shows that the idea that patronage an originally vibrant institution that decayed in the later Republic is based on an arbitrary projection of later idealizing views onto the remote past.

Under Augustus, the new role of literary patron emerged, with Horace as its spokesman; here virtue becomes a central feature, but in turn renders the bond highly selective, behind closed doors, as it were. It is no surprise that Horace can speak of Maecenas as a friend: friendship was not another name for patronage, but individual patrons and clients of different social status could develop the kind of intimacy that is properly called friendship (199), without negating the difference in position. This kind of ambiguity was inevitable; as Ganter observes, "In der Praxis fiel es schwer, normative Grundlagen von Patron-Klient-Verhältnissen, wie sie Dionysios als Ursprungsgeschichte der römischen Gesellschaft erzählt, umzusetzen" (199).

It is no surprise to find a different view of patronage in the epigrams of Martial and the satires of Juvenal. Their poetry revolved around the imperial court and the indignities to which men of high class were subjected, although they also cast a condescending, if sometimes sympathetic, eye on the greedy poor. A biographical interpretation is hard to maintain, given the irony with which both poets wrote. I am inclined to agree with Holzberg that one cannot simply infer social-historical interpretations from Martial's poems (212), but one can nevertheless apprehend how the vocabulary of patron and client was deployed. One development is the economization of the relationship, evident in the prominent role of the sportulae and the more aristocratic cenae, where a patron could insult his inferiors by offering them worse food and wine, as well as subjecting them to other indignities. Here clients may in fact be assimilated to slaves, but always in the context of satirical critiques of customs and practices, and with an eye on the all-powerful emperor; the freedmen with whom he might surround himself added insult to injury. Seneca, Ganter observes, invokes similar scenarios to those of Martial and Juvenal, and she suggests that they refer to a comparable reality, for example in regard to the salutatio (239). Seneca betrays a similar disdain for the foolish masses, but unlike Martial and Juvenal he has no sense of social decline or the insecurity that afflicted the equestrian class. Beneficia for Seneca are the glue that binds not only closely related people but the entire society.

Pliny sought to model himself on Cicero, at least in his letters, but there are subtle differences: he calls himself advocatus rather than patronus, and his sense of his role is more one of duty than personal relation. If Martial and Juvenal represented an economization of patronage, Pliny, Ganter avers, aestheticizes it. What is more, Pliny occupies a double role: he is in some sense in the position of client vis-à-vis Trajan, but as provincial governor he models himself on the ideal ruler in a kind of imitatio principis (277), though one must never seem to compete with the emperor (281). He must also negotiate the tension between munificence and modesty, as well as that between gratitude, which implies reciprocity, and altruism; Ganter quotes (279) Pliny's Epistle 9.8.1: si laudatus a te laudare te coepero, vereor, ne non tam proferre iudicium meum quam gratiam videar. Pliny stresses the voluntary and personal relationship with Trajan, which assumes the form of amicitia (283-284); I would note that Dio Chrysostom too emphasized Trajan's friendliness, which was not typically singled out for praise in panegyrics, since it might suggest favoritism. Fronto was very close to the court, needless to say, and conjured up an image of patronage as a personal bond within a homogeneous elite, eliminating any hint of economic advantage.

Ganter concludes with the redefinition of patronage in Cyprian's correspondence. What role is there for patronage in the traditional sense when poverty is considered a virtue and when all benefits are ascribed ultimately to God? There was, of course, a hierarchy in the church, and to some extent this might be assimilated to traditional ideas of patronage, but the ideology of Christianity was grounded in a different set of values from that of classical Rome.

As Ganter notes, her book is not a survey of patronage but rather a set of soundings, examining crucial moments in which the idea was articulated and underwent change. Her focus, as the title indicates, is on patronage as a social bond, as that which held the Roman world together. To my mind, this was above all the case when it was associated with the concordia ordinum advocated by Cicero and Livy; later, it came to seem more partial, marked by social condescension or else limited either to the elite, or finally, in a different vein, to members of the Church. Ganter has traced these developments with clarity, thoughtfulness, and great learning, and her book is of value to all who would understand the core social relations of ancient Rome.