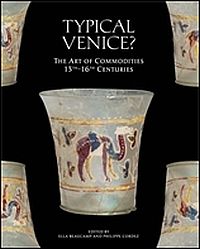 This handsome volume is a welcome addition to the growing quantity of scholarship on global material culture in premodern Venice. [1] Typical Venice? resulted from a conference with the same title organised and held at the Centro Tedesco di Studi Veneziani in Venice in March 2016 in collaboration with the research group Premodern Objects. An Archaeology of Experience, which was led by Philippe Cordez at Ludwig-Maximilians-Universität in Munich. Together, the volume's eleven chapters historically situate the concept of 'commodities' in relation to Venice as a trade and production hub and question the Venetian identity of such commodities in various ways.

In the book's first chapter, which serves as an introduction to the volume but also addresses a number of case studies in its own right, the editors Beaucamp and Cordez ask: "What is the art of commodities, and how does it contribute to shaping a city?" (31) They find evidence of a notion of commodities, understood to be connected with art and the city, in the writings of Martin da Canal, a thirteenth-century chronicler of Venice, and Marco Polo, the contemporaneous Venetian merchant-traveller. For Canal, commodities flow like water from the city's fountains. For Polo, art or ars concerns a particular type of commodity that results from work in cities. The word both of these authors use to denote such objects is marchandise (merchandise), a term, non-existent in classical Latin, that defines such objects through their relationship with merchants and markets. Their purpose to be sold determines their material, social and symbolic realization. Most chapters in the volume respond to this key concept by examining one type of object as merchandise in this sense; that is, as artful objects produced for sale in numbers.

For instance, Nathaniel Silver's essay makes a compelling case for approaching Venetian panel paintings as commodities. Focusing on fourteenth- and fifteenth-century painted polyptychs and their frames, Silver demonstrates that Venetian panel paintings were exported along the Adriatic coast in large numbers. In fact, Venetian paintings were far more widespread than their Florentine counterparts, counter to what Giorgio Vasari's preference for the latter would suggest. In its analysis of the spread of a commodity along the Adriatic coast, the chapter parallels that of Manlio Leo Mezzacasa about Venetian goldsmiths' work on sacred objects. Examining reliquaries, monstrances, chalices, and pyxes - and showing that sometimes, one type of object was transformed into another - Mezzacasa finds such objects as far south as Puglia and in wider Europe.

As the opening chapter makes clear, Venice made its living from and was built on commodities. This point is illustrated, for example, by Beaucamp's section on marble bas-reliefs that decorated palace fa&#231ades, so-called patere and formelle, which often came from Venice's Eastern trading partners and with which the city was given an appearance akin to others such as Constantinople, Cairo, or Damascus. Furthermore, as a popular port of embarkation for pilgrims on their way to Jerusalem, Venice saw itself as a sacred site, and its relationship with commodities had a spiritual dimension. Work, in the form of the making and trading of commodities, offered a promise of salvation. Thus, the protection of Venetian trades became a concern of the state. Dario Michele Zorza illustrates this point in his chapter about the sixteenth-century book trade. In response to a perceived crisis in the quality of book production in the 1530s, the Venetian government introduced the privilege system meant to stimulate innovation and raise production quality. This mattered, as the city's book industry contributed to its image as a centre of "prestigious manufacture", which was therefore of political importance (143). The acquisition of Venetian commodities by members of foreign courts was also deeply political. This is argued by Leah R. Clark, whose chapter focuses on the D'Este family of Ferrara and its interest in Venetian glassware and ceramics, highlighting the importance of physical access to commodities to not only buy objects but also to obtain knowledge.

Just how problematic the label 'Venetian' could be is demonstrated by Elizabeth Rodini's chapter about damascene ware. Incised and inlaid metalwork was produced in the Middle East. Venice was a significant consumer and distributor of such objects, yet Venetian craftsmen also developed an industry in such wares, imitating the Levantine models in a deliberate strategy that confounds art historians to this day. An association with Venice, in this case, went against the interests of the Venetian makers. Typically Venetian, the author asserts here, meant hybrid, foreign, and novel. A similar point is made in Susanne Thürigen's chapter, which is at first sight surprising in the context of this volume, about the southern-German clock maker Jacob Marquart and his use of 'Moresque' ornament. As Romedio Schmitz-Esser also highlights in his concluding chapter, these clocks were associated with Venice through their orientalizing Moresque styles. Thürigen convincingly analyses the various meanings that came to be attached to this type of ornament, from Venetian or 'Welsch' (foreign) to extra-European, even referring to the identity of the clockmaker himself.

One question left unanswered by the volume concerns developments over time. Organized loosely in chronological order, the chapters of Typical Venice? cover the period from the thirteenth to the sixteenth century. Occasionally, authors venture beyond this timeframe, as in Megan K. Williams' enlightening essay about Venetian paper. Williams argues that, from the Renaissance into the nineteenth century, paper from Venice was much sought-after in the German lands and the Levant as it was associated with quality, dignity, and authority. It is certainly one of the virtues of the volume to bridge the scholarly gap between the medieval and early modern periods. Yet, if the unconventional period scope was the result of deliberate choice - as this reviewer assumes - the editors refrain from explicit comment. Did the association between the city of Venice and marchandise change from the thirteenth to the sixteenth centuries? How did the notion of ars evolve, in line with and against commoditization? How did the creation of artful objects for sale in numbers transform into the later "art market"? (31, 151) These are areas for further research.

The production standards of the volume fully befit a study on such a subject. The high-quality colour photography, most of it full-page, adds considerable value, especially when the reproduced objects are little known beyond a small group of experts. I am thinking here, for instance, of the stunning Italian embroidered and brocaded velvet caftans now in the National Museum of Art of Romania, reproduced in Cristian Luca's chapter. All in all, this volume will be of interest to students and scholars of medieval and early modern Venice, while certainly serving audiences working on premodern material culture more broadly. While each of its essays will attract its own specialist readers, as a whole the volume raises important questions about commodities and their fluid identities.