Joyce de Vries: Caterina Sforza and the Art of Appearances 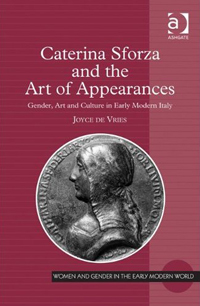 Caterina Sforza's character in the recent television series The Borgias (2011, by Neil Jordan) is in many ways in line with the representation of her person over the last four centuries: she is shown as a stern, powerful, and bloodthirsty woman, dressed in a widow's black, but not necessarily very much in accordance with historical sources. It is this legendary representation of Caterina Sforza (1463-1509) that is exposed layer by layer in Joyce de Vries's book, which may be described as a study of Sforza's cultural patronage, a biography, and a historiographical analysis in one. De Vries inscribes her study of Sforza in a row of recent more nuanced approaches to Renaissance women's agency, while arguing that she was, in fact, no exception among prominent women of her time. [1]

Caterina's life story is, nevertheless, exciting. Born as an illegitimate, but fully acknowledged daughter of Galeazzo Maria Sforza, Duke of Milan, she married Girolamo Riario, favourite nephew of Pope Sixtus IV and vicar of Imola and later also of Forlì in the Romagna. The couple had many children, six of whom made it past infancy, but Caterina was not only wife and mother: when in 1488 her husband Girolamo was cruelly assassinated by his own subjects and the rest of the family was taken prisoner, Caterina managed to take the matter into her own hands and came out victoriously as regent of the Riario territories for her underage son. In the regency period, which lasted for twelve years, she had long-term relationships with two more men, both of whom she had children with. The youngest of these was Giovanni de' Medici, later father of Cosimo I. In 1501, she finally lost her territories to Cesare Borgia, and retreated to Florence, where she managed the interests of her family until her death.

For the theoretical underpinnings of her book, De Vries is indebted to Stephen Greenblatt's concept of 'Renaissance Self-Fashioning' (1980), as well as to more recent studies of women and gender in the Renaissance. Her main point of reference in that field is the now classic essay by Joan Kelly, 'Did Women Have a Renaissance?' (1977), which, according to De Vries, presented Sforza as the exception to Kelly's rule that women in the period we have come to define as 'Renaissance' actually perceived a loss of liberty. But Caterina Sforza was no such exception, argues the author: she constructed an identity for herself by performing ever-changing roles, those of bride, wife, mother, widow, regent, and lover, just like various other women in the Italian courts.

These different roles are a recurrent theme in the book: with the first chapter containing the majority of the biographical information, each of the following chapters reads as an alternative reiteration of Caterina's life story, which sometimes makes the book a bit repetitive. Besides the introduction, it consists of five chapters, each of which discusses a particular strand of Caterina's cultural patronage: public performances and pageantry, architecture, interior decoration and clothing, religious and humanist patronage, and, finally, patronage over the grave. When applicable, her husband Girolamo's patronage is described alongside Caterina's, to make comparison possible. The last chapter largely focuses on her posthumous legendary identities from the early 1500s to the present.

Caterina Sforza has heretofore not been considered a great patron, yet as De Vries explains, any person in the Renaissance who ruled had to engage in extensive patronage and cultural practices (4). The case of Sforza fully confirms this working hypothesis. Indeed, she comes to the fore as an active, pragmatic and intelligent patron, who not only oversaw large architectural projects, defence works, and interventions in the urban fabric, but also kept up a high level of appearances in the furnishing of her residences as well as in personal dress. Over the years, however, she also had to sell or pawn many of her goods, and many of her architectural commissions were significantly changed after her death.

An example that may illustrate the nature of Caterina's patronage is her work on the Rocca di Ravaldino, one of the residences of the Riario family in Forlì, that had played a key role in her triumph over the family's enemies after her husband's violent death. She improved the living quarters, she constructed an enclosed garden, as well as a larger park with a farm and hunting grounds - all now lost. A section on interior decoration shows Caterina's interest in the Florentine arts; she ordered sets of majolica tiles from the Della Robbia workshop (which were only excavated in the twentieth century). De Vries demonstrates that this evidence from the Italian provinces also serves to reconstruct the decorations of the Medici Casa Vecchia in the artistic centre of Florence, on which Caterina's commission was modelled. Another interesting aspect of the Rocca di Ravaldino is Caterina's construction of military housing for her army. Taking the soldiers out of the city and quartering them next to her residence, she not only ensured military protection but also freed the Forlivesi from the burden that soldiers usually were, thus ensuring support from the community, which in turn provided labour and building materials.

For the reader of this book, the relation between its central aim (to assess Caterina Sforza as a patron of art and culture), its hypothesis, the presentation of evidence, and finally, possible answers, is not always very clear. The image the reader gets of Caterina Sforza is one of a woman who, in the various roles she fulfilled throughout her life, tried to comply with what was expected of her, the most exciting moments arising when different roles - for example those of regent and lover - and, thus, different sets of expectations, were clashing. Throughout De Vries's text, descriptions of these expectations (based upon prescriptive literature by humanists and writers such as Giovanni Pontano and Niccolò Machiavelli) and descriptions of Sforza's actual behaviour tend to get mixed up; so much so that the normative texts themselves seem to be turned into sources. This raises the question to what extent the book manages to contribute to the, according to its author, already existing nuanced image of women's agency in the Renaissance.

The book would have benefited from more serious editing, because it still contains numerous typos. Furthermore, it is a pity that a work on material culture is illustrated so sparsely; and the relation between text and illustration is not always made clear. Apart from that, this book is a well-written and useful contribution to the field of Renaissance studies, not only because it makes available an up-to-date account of Caterina Sforza for the English-speaking world, but also because it sheds much light on Renaissance production and consumption of serially manufactured goods, and therewith on the kind of material culture that, in the end, was much more widespread than the few paintings by famous artists that art history has focused on for such a long time.