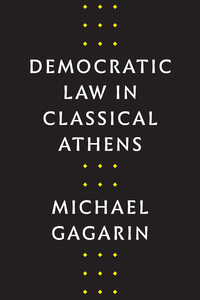 Books on Greek law, and books on legal topics by Michael Gagarin, are plentiful. What is distinctive about this book, based on but substantially rewritten from his Fordyce Mitchel Lectures at the University of Missouri in 2015, is that it follows threads on the civic context of Athenian law as opposed to narrowly legal matters - primarily in the fourth century, from which most of our evidence comes.

In a short Introduction Gagarin explains how he came to Greek law, initially to homicide law, from philosophy and literature, and favouring Anglo-American pragmatic approaches over continental European formalist approaches. He judges modern criticisms of Athenian justice excessive, and tries to strike a balance between those who focus on litigation as the pursuit of conflict and those who focus on litigation as upholding the rule of law.

Chapter 1 outlines the main features of Athens' participatory democracy and its participatory rather than expert-led system of making and enforcing laws. The Athenians seem to have been happy with their system; Gagarin suggests that its reliance on juries and on rhetoric makes the present-day American system less distant from it than most other present-day systems.

Chapter 2 discusses performance, starting from Edith Hall's comparison between lawcourt and theatre, but citing also the Homeric Shield of Achilles, where litigants and elders needed to gain popular support; and classical trials including those in Eumenides and Wasps.

Chapter 3 continues with negotiation, which might avoid a formal trial, and particularly with proposals (commonly rejected but used to gain a rhetorical advantage) involving oaths, torture of slave witnesses, and demands that men should give witness or swear a denial.

Chapter 4 studies rhetoric, much discussed in classical times and more important in modern systems than some suppose. In Athens laws were presented to the court by litigants, not expounded by experts, and jurors had to decide both on the facts and on the laws: Gagarin illustrates the problems from Lysias' Killing of Eratosthenes (whom the speaker had caught in bed with his wife).

Chapter 5 turns to rules and relevance. The Greeks attached importance first to oral rules and then to written laws; for some offences prosecutors had multiple options with differing implications; speeches had to be relevant (but relevance could include background and character), though there were problems of definition and enforcement. Athenian courts did decide on the charges made, not just on the merits of the opposing litigants.

Next chapter 6 deals with justice, which the Athenians unlike modern lawyers tended to identify with lawfulness: a just verdict might take account of more than narrow legality, but there was no separate concept of equity. Similarly, in chapter 7, verdicts should benefit the demos and the public interest (so that past or future public service might be invoked, mostly as directly relevant, sometimes briefly as an additional factor; and speakers talked of duties rather than rights).

Chapter 8 turns to the rule of law - in Athens, of democratic law. Athens was rule-based, made everybody subject to the law, and did not blatantly let politics trump law; with allowance for societal differences, it satisfied to a considerable extent eight principles propounded in Bingham, The Rule of Law. The most striking difference from modern systems was the Athenians' broader sense of relevance, coupled with a need to assess likelihood, but for them law, justice and public interest supported one another.

Chapter 9 sums up with The Success of Athenian Democratic Law. Gagarin's aim has been to work out how, and how far, the Athenians with assumptions different from those of modern lawyers achieved the rule of law. His conclusion is that, while considerations such as public interest played a part which they do not play in other systems, the Athenians had safeguards against arbitrary and capricious verdicts, and the laws were intelligible and access to justice was easy. On the other hand, it was easy for a man's enemies to find grounds on which they could prosecute him; and I should add that the availability of such charges as deceiving the people led to a blurring of the distinction between breach of the law and political or military failure. Gagarin judges that this system could not have worked except for a small community with a large degree of citizen involvement, but Athens was such a community and in Athens it did work.

This book does a very good and interesting job of exploring the Athenian judicial system in its wider civic context. There are frequent references to modern legal systems, especially that of the U.S.A. Uncertainties are mentioned where necessary but are not laboured; and I agree with Gagarin more often than I disagree.

Note by the reviewer:

I was consulted by the publisher about this book.