Demetra Kasimis: The Perpetual Immigrant and the Limits of Athenian Democracy 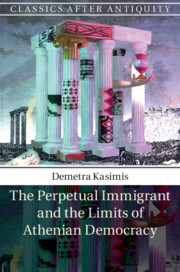 The author of this book belongs to the Department of Political Science at the University of Chicago, and as an American of Greek ancestry is a beneficiary of the greater ease with which a new citizenship can be acquired in the modern world. The book is based on her Ph.D. thesis at Northwestern University, and it aims not to reproduce historical research on metics but "to engage the figure of the metic as a site of discursive and political meaning" (3).

"Metic" is the term used in Athens (and other Greek cities) to denote free residents in a city whose origins were elsewhere and who were not citizens (with the rights which that entailed) of the city where they lived. Metics could be granted citizenship, or some of the rights associated with citizenship, in return for outstanding service, but they had no standard entitlement to apply for citizenship.

In the introductory chapter 1 Kasimis remarks that metics have been played down by comparison with other marginal figures who are contrasted with adult male citizens, but, as figures who do not fit the standard polarities but were in some ways excluded yet in other ways included, they deserve greater attention. Pericles' citizenship law of 451/0 required citizens to have an Athenian mother as well as an Athenian father, and the Athenians came to think of themselves as autochthonous, united in being descended from Attica's earliest inhabitants, and indeed from the land itself. Metics, who could mingle with citizens and who might try to pass for citizens, challenged that understanding of what it meant to be a citizen.

Chapter 2 is devoted to Euripides' Ion. Ion is the son of the autochthonous Creusa and the god Apollo, brought up at Delphi. When Creusa and her non-Athenian husband Xuthus go to Delphi, Xuthus supposes Ion to be his own long-lost son, plans to take him back to Athens but without publicising that identification, and Ion reluctantly accepts. Creusa plans to kill Ion but recognises him as her son. That in turn is a source of embarrassment, and at the end of the play Athena prescribes that Xuthus should not be disabused of his mistaken belief, and that Ion's descendants will colonise the Cyclades and Ionia. The play subverts the expectations of tragedy, leaving Ion autochthonous in fact but with his autochthony concealed. Kasimis sees here the message that Athens' "self-serving and exclusionary guarantee" depends on practices of disclosure and concealment (48).

At the heart of the book are three chapters on Plato's Republic. Chapter 3 focuses on the setting of the dialogue, at Piraeus (where many metics lived) in the house of the rich and socially accepted metic Cephalus (who became a member of Athens' colony at Thurii); and it is there that the plan to found as a colony an ideal city from which foreigners will be excluded is developed. For Kasimis this is not mere background, to provide a setting but then to be ignored, but Cephalus, his family and his setting symbolise "migration, trade, colonization, war, the democratic ordering of persons and places, and the instability of these status assignments". Cephalus embodies the blurring of citizen and metic statuses which is to be discussed below, and in book I the worship of the foreign goddess Bendis is performed equally well by Athenians and by foreigners. In the ideal city only impressionable children will be able to absorb the "noble lie" that those who are pronounced to be kin are kin.

The "noble lie" of book III is the subject of chapter 4. For Kasimis it is not a simple endorsement of a natural hierarchy but a revelation that such distinctions, in the ideal city and in Athens, are a regulatory fiction. In Athens the "lie" of autochthony united all the citizens and set them apart from the non-citizens, so that a metic such as Cephalus might try to pass for a citizen but remained incurably alien. In the Republic personal qualities were in fact to trump inherited status, but inherited status was to be maintained as a fiction, and the assignments were to be represented as facts of nature.

Chapter 5 deals with book VIII's representation of democracy, where through love of freedom distinctions between fathers and sons, between men and women and between citizens and foreigners are occluded. For Kasimis Plato is not defending such "natural" distinctions, but drawing attention to their fragility: democracy's constitutive distinctions are found not to have the "natural" foundations which it claims for them. In Plato's Republic, and in the Athens in which Plato lived, status distinctions are not absent but are at risk of transgression. Mimesis works in both directions - metics imitate citizens and citizens imitate metics - and this suggests that the distinctions are artificial and there are no true originals.

In Pericles' funeral oration in Thucydides II Athens' glory is seen as an inheritance yet also as an achievement for others to emulate. Autochthony is concealed but yet is a first premise, another regulatory fiction, which is challenged in Republic VIII. The mock funeral oration in Menexenus, attributed to the metic woman Aspasia, emphasises the autochthony which Pericles passes lightly over, and at the end what is to be kept secret is that Socrates has mimicked Aspasia.

In chapter 6 Kasimis turns to Demosthenes 57, where Euxitheus argues against his deme's rejection of his claim to citizenship, by claiming that he has acted as citizens act, and that such matters as his father's accent and his mother's occupation point not to foreigners but to citizens in difficult circumstances. It was easy in Athens to associate land-owning with citizens and working for pay with foreigners, and the democratic membership order depended on oppositions which it could not uphold. The Athenianness of Euxitheus' father was not challenged during his lifetime; after his death Euxitheus was accused of inheriting foreignness from him, but he did not claim other parents because he thought there was nothing to hide in his actual parentage. If he was vulnerable, any other Athenian might be vulnerable to a charge of pretence also.

In her Conclusion, Kasimis maintains (surely rightly) that the value of studying such texts is not that they teach us what to think but that they equip us to criticise present ways of thinking. In her case, the rescue of metics from the shadows (and insistence that they are not as shadowy as is often claimed) enriches our enquiries about what makes a democratic citizen. The citizen as a clearly fixed category gives way to a range of statuses in which the metic plays an importantly ambiguous part.

Kasimis' writing is sometimes strange: she does not "suggest" but "wagers"; some passages are (to use a phrase of her own: 53) "at or outside the boundaries of intelligibility"; and occasionally a slip has got past the copy editor (e.g. "illegibility" for "ineligibility": 156, 158). As for the substance, this is an interesting and carefully thought-through exploration. Kasimis seeks problematisation and contestation, and finds them. If we are looking for a stimulus for political thought in our world, that is of course legitimate. If it is suggested that what she finds was deliberately placed there by the authors whom she studies, that is less clear, and, although she mostly and inevitably suggests that her readings are better readings, at one point there is an admission that "this argument is not an exercise in recovering Plato's intentionality" (89). Regardless of that, this book is "good to think with".