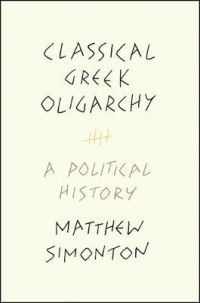 Simonton starts by claiming that the prevalence of oligarchy in Greece has been over-estimated yet the phenomenon of oligarchy has been rarely studied. He argues that oligarchy began as a consciously preferred alternative to democracy, survived when there were institutions which united the élite and prevented the demos from combining against them, but collapsed when the élite failed to maintain their unity. In the archaic period cities were dominated by the élite but there was a limited role for the common people. The emergence of democracy required both a sufficiently discontented demos and a renegade member of the élite willing to espouse the demos - and that, Simonton believes, is how with the additional stimulus of Spartan interference Cleisthenes came to introduce democracy in Athens. But democracy provoked in the élite a desire for an oligarchy which had no role for the demos. That meant rule by those who satisfied a fairly high property requirement: Simonton rejects all suggestions of the inclusion of a class of "middling" hoplites (and he claims that Athens' intermediate régime of 411/0 was neither an oligarchy nor stable). Sparta was itself peculiar, but it was opposed to democracy and supported oligarchy in other states.

Simonton ends chapter 1 by stressing that he ascribes actions to individuals rather than to collectivities; that oligarchies needed to make members of the demos dependent on the régime rather than apt to cooperate against it, and their own members apt to cooperate in upholding the régime rather than seize greater power for themselves. In accordance with New Institutionalism he sets out to study how oligarchies were authoritarian régimes which constrained the behaviour of their élite members and non-élite subjects - and the result is an analysis rather than the "history" of the sub-title.

Chapter 2 focuses on the need for oligarchies to maintain equality among the ruling élite: using devices such as secret voting to secure political equality; sumptuary laws to secure equality in lifestyle; officials and mechanisms to settle disputes before they became dangerous, and to avoid the inflammatory rhetoric of democratic lawcourts; and the resort to exile by which the remaining oligarchs united to remove a dissident.

Chapter 3 turns to the oligarchs' need to avoid both excessive repression and offensive neglect of the demos, either of which might provoke the demos to unite against them. Oligarchic courts might be less emotional than democratic courts, but they were less open and accountable; and men seen as dangerous might be removed by extra-legal assassination, though in public maltreatment of members of the demos had to be avoided. Assemblies in which voting was public could be used to pressurise members of the demos into supporting the oligarchs (in Athens in 321-319 Simonton thinks the poorer men deprived of full rights still attended the assembly, but I doubt that); and co-optation of some members of the demos into the ruling body, or the promotion of those who gained enough wealth to satisfy the qualification, would make that rather than opposition the goal of ambitious men. Rewards for informers were another device for preventing or frustrating plots (even in democratic Athens - but Simonton fashionably notes that even in Athens there were women and slaves who could be seen as subjects of rather than participants in an authoritarian régime).

Simonton continues with particular fields of control, in chapter 4 the "politics of public space". In archaic Greece the cultured city centre could be contrasted with the primitive hinterland, and could serve as a forum where the élite displayed themselves to one another and to the lower orders. Tyrants were said to have kept the demos busy and dispersed in the countryside, without the leisure to frequent the city, but Simonton argues that that was the experience of the demos under classical oligarchies, and has been projected back to archaic tyrannies. When oligarchs seized power, they expelled the demos from the city centre, at least in the short term to prevent a counter-attack; and through a conscious strategy of clientelism individual members of the élite enlisted members of the demos in the countryside as their dependants.

Chapter 5 is devoted to the "manipulation of information". No régimes are totally transparent, but authoritarian régimes have a particular interest in controlling access to information and projecting a favourable image of themselves. Decisions were discussed and made in secret, without witnesses who could pass on information to a wider public. "Rituals of power" (such as choral performances, sacrifices and displays of prosperity, and the destruction of monuments after a change of régime) condition the behaviour of those caught up in them, even if they do not believe the message which the powerful seek to convey, though there is also a risk that those assembled for the occasion may use the occasion to combine in an act of resistance.

In chapter 6 Simonton turns to the breakdown of oligarchic régimes, which ultimately showed oligarchy to be non-viable. As noted in the previous chapter, gatherings of the people (at festivals, or in military contexts) provided an opportunity to see the weakness of the rulers and to unite against them. Shocks from outside might lead one of the oligarchs to steal a march on his fellows and become tyrant. Failures within the oligarchy might lead one of them to court the demos and lead an attack on the oligarchy. This analysis, he insists, is not opposed to but compatible with an analysis which attends to emotional matters such as hybris and competition.

A short Afterword emphasises the increase of democratic régimes in the fourth century, and even more in the hellenistic period, to be reversed only as Rome became involved in the Greek world. Simonton gives the credit to the Athenian model, and the decision of Alexander the Great to support democratic régimes in Asia Minor, and argues that democracies did not suffer from internal weaknesses as oligarchies did. An Appendix lists known régimes in cities in the fifth and fourth centuries.

Clearly Simonton finds oligarchies fascinating but repellent. He makes the most of the charge sheet against them, sometimes taking examples from tyrannies (or supposing that what is attributed to an archaic tyranny is projected back from classical oligarchies), and assuming that theoretical statements and democratic disavowals are based on actual instances of oligarchic practice. His analysis is reinforced frequently with modern parallels and with the postulates of game theory and other social studies. It is of course true that all régimes, in so far as they can, in their own interest exploit public spaces, control the dissemination or withholding of information and try to project a favourable image; and Simonton himself notes (219-21) that democratic régimes used publicity-controlling devices comparable to those ascribed to oligarchies in chapter 5. And, while game theory and the like can be enlightening, and Aristotle's Politics shows that questions about what cements or destroys a régime could be considered in antiquity, we need to allow for the likelihood that often men innocent of the theories did instinctively what we can rationalise.

At times Simonton perhaps pushes too hard, but this is a valuable exploration of the means by which Greek oligarchic régimes sought to maintain themselves in power.