Greg Anderson: The Realness of Things Past 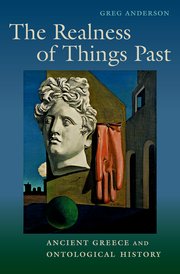 After a short Introduction, Anderson begins Part I in ch. 1 with the outline of a typical view of Athenian "democracy". He proceeds in ch. 2 to the standard "problems" (which seem more problematic to him than they do to me), that the Athenians had slaves, had an empire, secluded women and tolerated economic inequality among their "equal" citizens; and he continues in ch. 3 with Athens' failure to distinguish as we do between private and public, or to recognise economy and religion as distinct areas of life.

In ch. 4 he suggests that the reason for the problems is that all historians tend to assess alien "lifeworlds" by how far they measure up to the "lifeworld" of modern western society (with the emphasis on "modern" rather than on "western"), and to judge Athenian demokratia by the criteria and standards of modern liberal democracy. Even recent cultural history, with its new interests, he continues in ch. 5, uses a version of the same template; and we need an "ontological turn", "to suspend our own modern standards of truth and realness" (60).

In Part II Anderson sets out his case for the ontological turn. Every community has had its own ontology, its own "account of what it deems to be the real world", and ch. 6 looks at a variety of differing non-modern worlds. Amazonian societies have had a distinctive view of human beings, animals and spirits; in Hawaii and in Bali the divine king embodied the whole community, and in Hindu society and some Mexican and Melanesian societies persons and attributes were permeable. The Great Code of Ming China envisaged a heavenly realm, an earthly realm, where the living and their ancestors co-existed, and the emperor and his officials, who mediated between the two. In the corpus mysticum of mediaeval Europe individuals were not free-standing but components of social bodies, and the image of the body with its various parts was frequently used.

Ch. 7 turns to the modern lifeworld, with its "entirely new way of being human", based on a distinction between nature and culture. Anderson sees it as characterised by materialism, anthropocentrism, secularism and individualism (combined with some kind of social impulse, while government is seen as a necessary evil). It is unable to make sense of lifeworlds which do not share those characteristics, and that narrowing of our understanding produces an ethically problematic "historicist imperialism".

We cannot, Anderson continues in ch. 8, claim that we have discovered universal standards of truth and realness which other societies lacked. Quantum physics has undermined the certainties of Newtonian physics, and the Cartesian divide between subject and object, which were essential to our world view. The certainties of social science have been shown to be subjective by writers such as Marx and Foucault, and post-colonialists have exposed the parochialism of our society's studies of other societies. Our world is no less contingent than those worlds which we study.

Hence, ch. 9 argues, we need to study "the diverse life-stories of multiple humanities" on their own terms, without imposing a single ontological template on all of them. This will not only be preferable ethically and philosophically but will be more meaningful historically, and it will make possible an outsider's critique of our own lifeworld.

In Part III Anderson applies this to the study of Athenian demokratia. Ch. 10 emphasises that gods were omnipresent in Athens and in the lives of the Athenians; their temples were the grandest buildings, and engagement with the divine took more time and energy than political activity. Our identification of "religion" as a separate category would not have made sense, and the distinction between hiera and hosia was not a distinction between "sacred" and "secular". The Athenians believed seriously in their claim to autochthony, and in the provision for their life made by Mother Attica. The Athenian demos was not just an aggregate of individual Athenians but a thing-in-itself, and was composed primarily of households. All this is symbolised by the induction of the epheboi at the sanctuary of Aglaurus.

In ch. 11 Anderson stresses that ultimately the life of the community and the particular lives of particular members were governed by the gods. Religious rituals to secure the favour of the gods were of paramount importance, and the role of women in those rituals was not an "exception which proves the rule" of female seclusion.

On the human level, in ch. 12, the community was made up of households: far from being "squeezed between the stronger claims of the individual and the polis" (Anderson quotes J. N. Davidson), households were fundamental to the lives of the Athenians, and while women had different roles in them from men their roles were no less important. Athens was not the misogynistic community which modern assumptions have made of it. Husband and wife were complementary partners in the household, and the polis was a community of households, not a political entity run by men.

The households were incorporated in various larger groupings, and ch. 13 looks at some of them. Particular bodies had their particular engagements with the divine, among them the 139 demes. Marriage was arranged through the households concerned. Phratries and demes recognised young adults, descended from Athenian parents, as full members of the Athenian community. Conformity to the community's norms was ensured by gossip and reputation, and by a mixture of lawcourt justice and self-help, still dependent on individual rather than official initiative. The ten tribes were the largest subordinate units within the polis, self-organising bodies which served to articulate the citizen body for various purposes and functioned as a city in miniature: though created by Cleisthenes, they were accepted as primordial components of the Athenian community.

Ch. 14 brings us to the political demos, neither a "state" nor "stateless". It was not an autonomous agency but a human superorganism. Demokratia was the business of a social body and of all its constituents, not a mechanism to secure political equality among Athenian men, and it involved the coming together of Athenians as politai. The demos was the embodiment of the Athenians; it made authoritative decisions, but it did not "govern" Athens; it decided only those matters which had to be decided for the whole of Athens.

Ch. 15 turns to "the economy", a category which makes sense in our lifeworld but did not in the Athenian, and argues that we need to understand how the Athenians thought about resources. The most important exchanges were those between the Athenians and their gods (e.g. temples and sacrifices in return for divine favour and meals); marriage involved a dowry and the wife's womb; the rich minority contributed to the polis in various ways; slaves were numerous, and were essential to the prosperity of the rich and to the well-being of the whole polis.

Ch. 16 sums up Anderson's understanding of an Athens based on a very different "way of being human". Social being mattered more than individual, women had a separate but important role, there was no "government", and inequality was inevitable. Problems are due to modern analysis, not to Athenian realities. Aberrant behaviour did happen, but it was aberrant. There are indeed texts which question the world-view which Anderson has focused on, but they are products of a few of the élite, and are still produced within the same basic lifeworld; Thucydides was not a modern historian before his time. And, despite changes in detail during the classical period, Athens' ontological basis remained the same. Anderson's Conclusion focuses again on the tyranny of our lifeworld, on the need to separate the past from our present, to avoid projecting our entities back into the past and distinguishing history from anthropology, and to renounce the dominant position of our own lifeworld.

What are we to make of this? Anderson is drastic; but good historians have always known that we need to understand our subjects on their own terms rather than ours. Chs. 10-15 in fact do a good job of understanding Athenian society on (some of) its own terms and of explaining why it had the features which chs. 2 and 3 found problematic. But more conventionally minded readers may think that that could have been achieved without fanfares of new ontology.