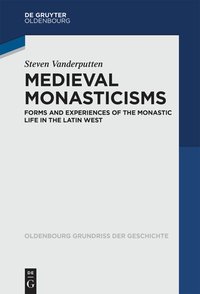 The newcomer to the monastic world of medieval Europe now benefits from a wealth of guidebooks. Still the early classics are readily accessible and they have been surrounded by a serried rank of surveys of orders and congregations, of national and regional networks and of those exceptional or exemplary monasteries whose long history and wide influence happens to be richly documented. Recently the weight of expert guidance has been raised yet further with the appearance of multi-authored (and multi-volume) explorations of monasticism in all its forms within the western Christian tradition.

Consequently it is not easy to see what another textbook can offer to students already almost embarrassingly well-served. Professor Vanderputten is a prolific scholar of the northern networks of monasteries in the centuries either side of 1000 CE that saw them stabilise and secure an institutional and ideological hold on hierarchy of the church in France, Germany and the Low Countries. His rehearsal of the defining moments of these so-called monastic centuries are the anchorhold of his book. In both parts of his text, 'History' and 'State of the Art', the early and high medieval period is allowed some twenty per cent more pages than the later Middle Ages, despite Vanderputten dating of 'late' as early as the years between the death of Odilo of Cluny (1049) and the arrival of Robert of Molesmes at Citeaux (1098).

As might be anticipated from the focus of his previous publications in Vanderputten's telling this is a story of leaders and legislation, congregations and customary uniformity. Patristic precepts and practices of ascetic sacrifice prospered in Europe from the eighth century because they were pressed firmly into the seigniorial and social frame now prevailing. The cenobium became a component of a government machine, an asset in the shared ownership of 'rulers, bishops and high-placed laymen'. Reform was not, in reality, a matter observance, the reader is advised, but a means by which stakeholders - 'rulers and bishops' - might raise service delivery. Even Cluny is recast as a business strategy, to see William of Aquitaine retain his 'controlling stake' in the face of his 'competitors'.

Here the inexperienced reader is given the benefit of Vanderputten's very close reading of the legislative corpus woven around the monastic life before 1100 and which for him was its very lifeblood. But they are offered only a glancing view of its other - it might be said, fundamental - features. Vanderputten himself is evidently less persuaded by the value of other possible touchstones of the monastic phenomenon, particularly of its culture and cult. This leaves the learner historian with a description of monasticism which is heavy in its superstructure but hollow of the 'school' and the 'service' that was the celebrated calling of the Rule of St Benedict. For the student unsure of such axiomatic matters as liturgy and its performance, lectio and the syllabus of profession there is no help at all.

Vanderputten's home ground is broad enough but it extends no further than the Second Lateran Council (1139). Certainly, as he leads the student reader beyond Lateran IV (1215) increasingly he shares in their voyage of discovery. Naturally, he is ready to introduce the new congregations and orders - Celestines; Birgittines - and the unions that coordinated reform in Italy, Germany and northern France in the century from 1450. He is less confident in describing the shifting status of monastic populations in their respective states and regional churches. The recasting of their religious observance and intellectual occupations in response to the changing expectations of lay patrons and the secular church hierarchy are scarcely noticed. Their contribution to ideas and practices of Christian reform in the century after the end of the Papal Schism attracts scarcely more than a paragraph. Students looking to locate monasticism on the late medieval horizons known to Erasmus and Luther will be better served by the multi-authored companions mentioned above.

Part two charts the changing critical landscape under chronological and subject divisions that mirror Part one. Here, necessarily, Vanderputten does show some awareness of the breadth and depth of monastic expressions. There is welcome attention to their presence in the far north and south of Europe and at the margins of the most powerful polities: Ireland and Wales are noticed although eastern Europe is a distant prospect. Still, the focus is held on institutions and those people and measures that govern them. The interpretative language is managerial: of 'structures' and their 'organisation', of 'operations' and their 'co-ordination' and 'supervision'. In the representation of a large and lively scholarly field there is also a striking tunnel-vision. The most referenced authority (twenty-seven citations) in this account of the art's state is Vanderputten himself.

It is a fitting seal on a decidedly idiosyncratic introduction to the European monastic tradition; a reference point useful for its characteristically robust reading of the early medieval expansion of monasteries but perhaps to be provided to the student only after their orientation in the territory has begun. In fact as a companion to the first-time visitor it is not quite accessible or authoritative, neither a Lonely Planet nor a Blue Guide.