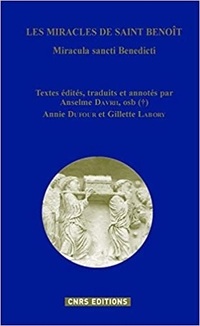 The abbey of Saint-Benoît-sur-Loire, commonly called Fleury from its site 'in agro Floriacensum', was cast in the crucible of the Frankish church under the care of only its second Christian king but much of its status in its long medieval history was borrowed from another, distant frontier: the hill-country of Cassino to the south of Rome from where the second abbot was said to have recovered relics of Benedict of Nursia and his sister Scholastica. These treasures taken to the monks' church of St Peter were the rootstock of Fleury's patronage, prosperity and - in face of diverse dangers from Viking raids (865) to devastation by fire - its preservation. The legend of Benedict led institutional life there on the eastern bank of the Loire and moulded the identity of each monastic generation. This creation of a cult community was recorded in a remarkable literary enterprise, a collective effort connecting the monks of four centuries, from the 850s as far as the 1120s. The Miracula sancti Benedicti is really a catchall title for a sequence of nine texts reflecting the different devotional impulses and conventual interests arising at Fleury in the (frequent) flow and (occasional) ebb of its fortunes, from the first translation of the Benedictine relics (the story of Book I) to a place of unchallenged pre-eminence at the beginning of the twelfth century when the disabled and diseased came out of the south (Auvergne and beyond) because 'audito quod in Floriacensi loco multa miracula sanctus operaretur' (IX, 8, l. 4, 520).

The edition and translation rests on the witness of twenty-two manuscripts of which nine can be firmly tied to Fleury itself. There is at least one, and for the earliest texts (Books I-III) two internal copies with which to establish the text. Even the oldest of these, Loiret H 20, the best guide to the Historia translationis, is scarcely a century later the assumed origin of the text; the other Fleury manuscripts stand no more than one generation from the authors of the books themselves. That the principal branches of the stemma should be so unusually well preserved is not only the result of the abbey's long persistence but also to local protection after the French Revolution. Loiret H 20 remained at the abbey itself. Yet the tree did not extend very far. Of the manuscript witnesses not made at Fleury only one, Saint-Gall, Stiftsbibliotek, 565, stands outside of Francophone monasticism. The remainder that carry a provenance point to a circulation that was comparatively circumscribed: Saint-Laurent de Liège, St Martin de Limoges, Mauriac and Moissac, exactly the circle of Cluniac affiliates that might be expected for Fleury which became an exemplar of this Benedictine reform. Only the Liège book, compiled by the Benedictine historian Jean de Stavelot, carries the Miracula into the late Middle Ages. By then neither the cult of the Nursian, nor the celebrity of Fleury, resonated as it had done when Cluny was in its pomp.

It was natural for an antiquarian such as Jean de Stavelot to catch hold of (eight books of) a work which was already seven hundred years old. Both as a whole and in its parts, the Miracula was more history than hagiography. The entries in the early books are framed with the annals of the time. Here Benedict is less the object of a cult than the subject of a church's struggle for power. Of course, the community of Fleury considered him their father and in the first books of the Miracula frequently he is represented as their de facto superior. There is more to these chronicles than the conventional gesta abbatum, as the radiating power of the relics brings the patrimony of the monastery into view. There are few narrative sources from before 1100 that so clearly locate a monastery in its seigniorial, social and economic hinterland. The last of the sequence do align the Fleury annalists directly with their monastic colleagues who promoted the leading shrines in the years of the Gregorian reform. Indeed, as Benedict is made the carer of women and curer of sensory deprivation, there are points of contact here, thematic and thaumaturgic, which call for further critical attention.

For scholars of monastic and miraculous discourse, and of the reception of the Cassinian tradition, this user-friendly text will be a very valuable tool.