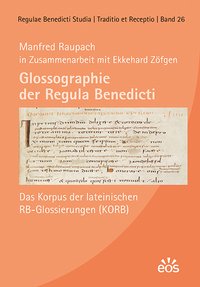 The Rule of St Benedict not only conveyed the customs of monastic life to medieval Europe, it also expounded its doctrine. The seventy-three chapters set out both what its followers should do practically, and why and to what purpose. The guidance was not that of Benedict, the celebrated cenobite of Subiaco and Cassino, or at least not his alone; rather it was wisdom gathered together from many sources, monastic pioneers past and present, the church's foremost theologians, and even the socio-legal customs that governed Rome. Learned by rote as the very expression of the monastic ideal, the rule, like the sacred page itself, required careful and comprehensive exegesis. As Benedict's text reached further across northern Europe after 800 CE it was subject to the same systematic glossing then emerging as the superstructure of Latin pedagogy. For the next three centuries, these gloss sequences were the principal means by which the Rule of Benedict was understood in the monastic world. They were eclipsed only in the years after 1100 as an expanding corpus of reform codes and customaries set new generations of monastics on a course that was at some distance from the rule itself.

This book is a compendium of these glosses, comprising some 10,000 glossae arising from nearly 3,000 entries, representing all twenty manuscript witnesses known to survive from the period before 1100. As the editors readily acknowledge its data demonstrate the state of research as far as January 2020: the investigation of the glossators' enterprise is now as venerable as modern medieval studies and is ongoing. The same may be said of scholarship on the reception of Benedict's rule, and the editors are surely right to anticipate that their effort may now serve to extend that enquiry further still.

The extant manuscripts reflect the entire pattern-book of the glossators' art, from alphabetical word list, a stand-alone gloss, a chapter head-note and a gloss that follows the source-text line-by-line. Nonetheless, the editors identify three categories of Rule-gloss characterised by shared, if not strictly uniform features of their method: (A) where glosses are grounded in keywords selected for their pedagogic value and so not always drawn directly from the lemmata of the source-text itself; (B) a 'group' which in fact the editors show to be tending towards the heterogenous, but which between them display further distinctive approaches: a reach for the Liber glossarum to expand an explanation; and the corollary of this, a close-binding to the text of the rule in both basic and elaborated glosses that renders the gloss into a verbal echo of the original; and a third (C), quite distinct group (in fact, a pair of manuscripts) carrying a Catena gloss, as the editors describe it, an apparatus that turns from the literal sense of the lemmata to their substance ('materia' in the language of the later accessus ad auctores) and thus standing as a developmental link to the commentaries on the Rule which monastic teachers turned to in the twelfth and thirteenth centuries.

They see also, albeit tentatively, some affiliations in these witnesses: those representing 'A' they classify as the Leiden family, named for the earliest copy, an early 9th century manuscript now in the Rijksuniversiteit Library but once at Sankt Gallen and others sharing an origin in north west Francia. Those that are loosely brought together as 'B' include an apparent Anglo-Saxon English axis, with copies with a provenance of Abingdon and St Augustine's Canterbury, but also with representatives from far south, both Italy and Spain. The locus of the Catena tradition is the most narrowly defined, represented by just two witnesses from Francia's northern frontier.

In fact, the construction of the glosses themselves suggests more diversity than commonality in the cultural and monastic contexts in which they were composed. The recognition of the Liber glossarum as a template for the task and a practical resource, ebbs and flows across the corpus: for some it features in fewer than half of the entries; yet in the Canterbury witness it becomes the default authority for any elaborated entry. In the discursive commentum of the Catena tradition, which the editors liken to lecturae, the Liber becomes the anchorhold. There is a similar spectrum in the stability of the source text itself. The Catena glossator would appear to have worked from two discrete copies. The clues to the different receptions of the rule to be found here demand further study: disjointed and dispersed chronologically and contextually they are nonetheless visible traces of the stemma's missing manuscript links. The glosses also set into relief the different status of local vernaculars, not only the overall extent of their usage but also the context in which they were developed. Three of the witnesses suggest that the vernacular was drawn into the gloss from its place in the putative rule copy to which it responded. The Catena glossator gives the impression of the general currency of vernacular usage, pausing to correlate the rule's terminology with what 'vulgo appellatur'.

This Catena sequence more than the other groups enables some speculation on the patterns of teaching and learning that lie behind the gloss. The editors suggest that this information-rich sequence, which alone among their three groups cites 'external' authorities, was intended for the use of superiors and office holders. The others, by contrast, seem almost confined to the literal exposition of the lemmata although a close-reading reveals distinct nuances of meaning: otiositas (idleness), the opening word of the rule's forty-eighth chapter, glossed as tarditas (slowness), a quite different connotation. The reason for such particular interpretations also requires further investigation.

In offering up such paths for further study this fundamental scholarship has given great service to scholars of the reach and reading of the rule when Europe was still on the brink of its 'monastic centuries'.