Franz Posset: Marcus Marulus and the Biblia Latina of 1489. An Approach to his Biblical Hermeneutics, Köln / Weimar / Wien: Böhlau 2013 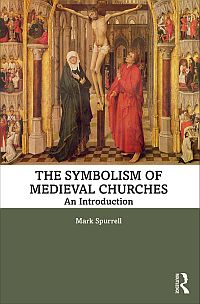 In keeping with recent interests in material culture and its impact on religious understanding and experience, this book aims to help contemporary people understand medieval categories for symbols and the religious motivations behind them. While church buildings themselves feature prominently, other aspects associated with medieval churches, including sacraments and readings of scripture, are considered. Especially in the early chapters, important features of medieval symbolism and their grounding in Neo-Platonism are clearly conveyed. As the volume continues, the amount of familiarity with the subject assumed in the reader increases, as chapters are devoted to various types of symbols, particular authors, and intellectual developments.

The author advances a number of arguments over the course of the volume. In chapter 2, "Recent Symbolism", Spurrell argues that 19th-century writers associated with the Cambridge Camden Society stressed the intellectual or theological meaning of symbols in medieval churches but lost sight of their function to drive Christians from earthly things to heavenly things. This is tied to their reliance on Durandus' Rationale, which, at various points throughout the volume, Spurrell equates with a loss of early medieval Platonist-inspired anagogy and a late medieval "simplistic symbolism," which "even contributed perhaps to the decline of symbolism as an active, living force" (Chapter 9), as part of a cultural "triumph of literalism" (Chapter 14). Chapter 12 offers a case study of Suger and Saint-Denis. Here Spurrell argues that the building was a "spiritual market place", focused on spiritual functions; he suspects that symbolism was applied to the architecture rather than itself inspiring the architecture. Toward the end of the volume, Spurrell concludes that while symbols had an anagogic or uplifting function until the 13th century, this was largely available only to elites. By the end of the Middle Ages, "a personal, emotional relationship with divine truths seemed remote from the symbol" (Chapter 16), and the only time a worshipper might have been encouraged to think about the symbolism of the church was once a year on the Feast of Dedication.

Overall, the focus of the volume is more on ideas, experiences, and techniques than on chronology. Thus citations of primary sources move forward and backward in time within chapters. Not surprisingly, famous authors make their appearance, eg Origen, Gregory the Great, John of Damascus. Hugh and Richard of St. Victor have their own chapter, as does Abbot Suger. Less well-known authors are also cited, sometimes as witnesses to less-elite understandings, such as Pelbart of Temesvár, Methodius of Olympus, Adam Dryburgh, and John of Metz. Surprisingly, the volume ends with a quotation from Caesarius of Arles as evidence of how "people further down the intellectual ladder used the tools which had been fashioned by the masters" (Chapter 16). More modern sources are also interspersed when a particular idea strikes the author as particularly well-articulated. Readers with a historically-oriented mindset may find this difficult to follow.

The volume includes eleven appendices. Most of these are texts in which church symbolism plays a central role; some, but not all, are provided with introductions. Included are a liturgy for the dedication of churches in the East and hymn for the Feast of Dedication in the West. Several sermons for the dedication of a church are included - an Icelandic homily, a short epilogue by Bernard of Clairvaux, and a model sermon by Pelbart of Temesvár. The final appendix is an essay on light and darkness in churches.

For those who would like information on how a particular church feature was used as a symbol, an Index of Symbols is provided. For instance, the church roof is taken as a symbol of charity, contemplatives and religious, hope placed in God, secular princes, men who lift their eyes to heaven, and a shield against temptation; each is referenced to the text.

Overall, valuable material is gathered here. As a reader, I would have appreciated more signposting to help me follow the volume's overall organization and argument.