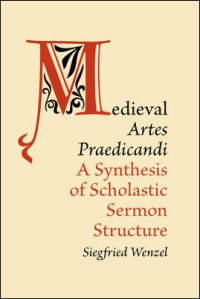 This small volume serves as a gift of succinctly presented guidance from an experienced instructor to students learning to find their way in the field of medieval sermon studies. Medieval sermons of the "scholastic" style had a characteristic and complex structure, taught over several centuries in how-to books, the artes praedicandi. Wenzel introduces a number of these books and then discusses the emerging sermonic structural Gestalt, illustrating it with a sample sermon. His focus stays on sermon structure. He acknowledges the need for, but does not seek to provide, wider synthetic treatment of such issues as the development and influence of the genre, the relationship between various texts, or their transmission patterns, topics outlined in Marianne Briscoe's Artes Praedicandi, in the Typologie des Sources series (1992). Perhaps in keeping with the medieval love for dividing longer texts into smaller numbered units, each short topical section (a paragraph to several pages) of the book is numbered.

Part I provides short introductions to 42 different artes praedicandi, those available in modern print editions and others, mostly of English provenance, that Wenzel has studied. For each he gives author and religious affiliation (when known); listing in Harry Caplan's Mediaeval "Artes Praedicandi": A Hand-List and its Supplement, Thomas Marie Charland's Artes Praedicandi: Contribution à l'histoire de la rhétorique au Moyen Âge, and references to manuscripts containing it; modern editions of the work, translations, significant scholarly discussions of it; and the source he will cite for it. In addition, Wenzel includes a concise characterization of the contents. Here we learn that Robert of Basevorn's Forma praedicandi discusses difference in preaching practice between Oxford and Paris (16) while Thomas Waleys' De theoria sive arte praedicandi raises the question of whether different Bible translations can be used in the same argument (22). While Wenzel indicates when a particular work, such as the Ars dilatandi sermones of Richard of Thetford, remains in numerous copies and was incorporated into other works, there is no overall discussion of the relative influence or popularity of the texts presented. Even so, Wenzel's collection is broad enough for the basic structural picture to emerge clearly.

Part II synthesizes the teaching of these various artes on the structure of the scholastic sermon. He prefers the label "scholastic" over "thematic", "modern", or "university", because it stresses certain habits of mind and provides minimal cause for misinterpretation. Wenzel provides a 12-part schema for the structure of a sermon, labeled a-l, and then proceeds to discuss each part, making clear that not every sermon would necessarily include all these features and that some are logical or rhetorical moves that might be discussed in various places in the artes and used in various sections of sermons. Wenzel proceeds here using a theme and variations approach, indicating what most of the treatises urge and then highlighting some of the idiosyncratic instructions of particular texts. He alerts the reader to the range of nomenclature used in the texts and to the fact that some facets may not be named even though their functions are discussed. Of particular interest might be Wenzel's own terminology of "bridge passage" to describe a very succinct version of the introductio thematis, the application of the thema (biblical sentence on which the sermon is based) to the concerns of the sermon itself (61-62). Not surprisingly, the longest discussion in Part II concerns the divisio thematis, that characteristic feature of scholastic sermons whose function "is to unfold the meaning of the chosen thema and thereby to provide the preacher with ample material for his discourse" (66).

The structure thus synthesized is then illustrated in Part III with a sample sermon, one preached at a visitation of a monastic community and preserved in Worcester Cathedral Library MS F.10. Unfortunately only the Latin text is provided; Wenzel published an English translation of this sermon in Preaching in the Age of Chaucer (2008). The labels a-l are used to highlight the various structural elements. This sermon does not include a prayer for divine assistance or a bridge passage, but has all the other elements discussed earlier. In his brief comments on the text, Wenzel points out how knowing the structure of the sermon can help one recognize scribal errors, such as the misnaming of several subdivisions. A much fuller discussion of the sermon would have been most welcome.

Part IV of the volume takes up several collateral issues raised by this focus on structure. What is the difference between a sermo and a collatio? While sometimes used synonymously, a sermon is longer and is more likely to include a protheme. Although preachers were exhorted to consider their audiences when composing sermons, the artes praedicandi do not discuss salutations. These manuals are also reticent on the subject of exempla, the narrative stories often used in sermons which have generated much recent scholarly interest. While the artes are clearly interested in effective rhetoric, they show little evidence of dependance on Cicero. Why all this medieval focus on structure? Preachers used the artes to help them create appealing, even elegant, verbal works in a world where wisdom was recognized in the proper ordering of things. Even so, the overarching goal was to effectively convey "the matter to be preached, which is the surpassing doctrine of Christ", according to Francesc Eiximenes' Modus sermocinandi (116).

Graduate students or scholars in other fields relatively new to the world of medieval preaching and the texts that supported it will find this a very useful introduction to sermonic structure and the terminology associated with it. It shows the shape of the forest despite a sometimes bewildering array of trees. The introductions to the various artes surveyed are good models of succinct presentation of essential information. At the same time, the volume leaves the reader wishing for more - for fuller discussions, for more examples, for additional sample texts.