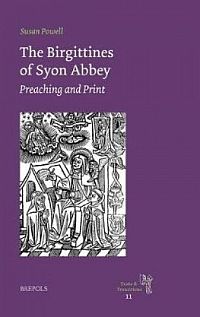 Susan Powell has long been studying Syon Abbey, and this volume collects and updates key articles, first published 1998-2010, on the outreach of the Abbey via preaching and print. It begins with a new essay and ends with a significantly expanded one. It serves as an expert synthesis of slow, careful research done in the context of a limited body of sources, but with a deep and insightful knowledge of contemporary persons, practices, and opportunities.

The volume is a goldmine of detail. Many pages are significantly devoted to footnotes and the bibliography covers an impressive 29 pages. Those who study Syon, English literary culture, religious life prior to the Reformation, and their intersections, will find this a most useful book. The two appendices list bibliographic information on books produced by Syon and the woodcuts (with images) used in Syon-produced books. Powell concludes that while much more is now known about the preaching and print of Syon Abbey than was known even a decade ago, much remains and is likely to remain puzzling (269).

Syon was the only Birgittine house in England, but it had a prominent place in religious culture since it was located near London and had royal and aristocratic connections. Chapter 1 provides a concise overview of the Birgittine Order, Syon, and its outreach. It introduces themes that will carry through the other essays, such as comparisons between what can be known about the brothers' library and that of the sisters, Syon's integral commitment to lay outreach, and its elite ties and reputation for orthodoxy which served it well until Henry's "Great Matter". Those who are new to the study of Syon are likely find the introductions to the various essays good companions to this first essay, fleshing out several of its important features.

Powell's collected essays make a convincing monograph. Chapters 2-4 deal with preaching, a key form of Syon's witness to the laity. Chapters 5-7 deal with manuscripts, books, and the networks of patrons and printers that facilitated devotional reading especially for the sisters and lay people. Each chapter begins with a "Headword" indicating the setting for the original essay and highlights its present updating. Each ends with an "Afterword" indicating further research suggested by the current state of the field. As a result, the book is not only a good source for those studying Syon, but also for those interested in the historiography of Syon.

The Birgittines were known for their preaching, especially on the days of Syon indulgence, yet there are very few extant examples of it. Powell demonstrates how a careful historian, deepening her methodology over time and making good use of the sources available, is able to present a convincingly rich picture. As she puts it, before 1519, "the likelihood of a Syon provenance can sometimes be gleaned by astute detective work" (129). Cox MS 39 (in the ownership of Dr Gregory Stevens Cox) is likely to have been produced and used at Syon; it contains 13 sermons with instructions on how to use these to make an additional 38. Powell is careful to say that Syon authorship and use are not confirmed, despite donation by a Syon brother, a Syon binding, and listing in the register of the brothers' library. Other sermons with a probable Syon provenance are those for new feasts added by Caxton to his 1491 edition of Mirk's Festial. To make her case, Powell discusses personal networks, textual parallels, and devotional practices. Her wide knowledge helps her make sense of minimal evidence and fill in the gaps.

Unambiguous evidence for Syon texts first emerges in 1519. Syon provided texts to printers, whether or not they were written by members of the community, and these books formed an important part of their lay educational efforts. Key persons for such dissemination were Abbess Elizabeth Gibbs, whose monogram shows up on several Syon woodcuts, and Lady Margaret Beaufort, mother of Henry VII and sometime resident of Syon. Lady Margaret is famous for her piety, including a desire to promote spiritual learning and devotion. Chapter 6 here makes good use of Beaufort's household papers to underscore her ties to Syon, books, and printers.

The final chapter deals with the reign of Henry VIII, the dissolution of Syon, and the fate of its books. The intertwining networks of people and texts again come to the fore with particular attention to Margaret Pole, mother of Reginald, cardinal and archbishop. Prior to Henry's change of heart, Syon served as "the fulcrum of learning, piety, and influence" (228), but its strong connections to those in power would create a strong demand for conformity. Syon did not engage in polemics, but continued to offer traditional works with an emphasis on spiritual consolation and perhaps provided increasingly out-of-date counsel through the confessional. At the dissolution, the brothers' library seems to have been dispersed in London, while many of the sisters took books with them as personal possessions. Powell offers analysis of 8 such books, detailing how they traveled and where they have ended up.

There is a great deal of literature on Syon and the persons associated with it. This volume fills a central niche in this rich area of historical study, one that fits the mission of Syon.