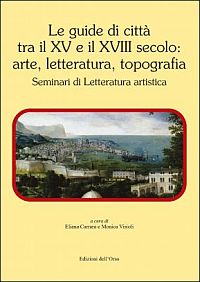 When we think about the lack of comfortable transport during previous centuries, it is easy to expect that people mostly stayed at home. Nonetheless, it is well known that even then many good reasons existed to travel. Merchants sold their wares, artists travelled to get commissions, kings went on progress, sinners went on pilgrimage, soldiers fought wars abroad. Those who left home to undertake a journey needed advice and practical information. Those who had returned were happy to share their experiences and give insider tips. Although travellers wanted to know about guesthouses, facilities for exchanging money, places of worship, even pilgrims were interested in ancient monuments in Rome and Constantinople or able to appreciate the finer points of architecture and altarpieces in the churches they visited en route.

In Rome, as a well-frequented pilgrimage destination, travel literature had been created since the middle ages and frequently combined information on churches and catacombs with descriptions of the main (Christian) antiquities (125-151). But other cities also wished to present their sights, for example Florence, for which Francesco Albertini composed a city guide in 1510. Such early-modern guides often took the form of a short Memorial and combined descriptions of the main works of art available in a particular city with a general laudatio of the city. The guide book thus became not only a repository of useful travel information but also a panegyric. Written either in prose or verse (111-124), this type of literature was often commissioned by city fathers as an expression of civic pride.

From the fifteenth century onwards, descriptions of cities, regions and particular sights were composed in early-modern Italy. The approach was not always one of a city guide trying to attract (foreign) tourists but one of pointing out the highlights (and importance) of the author's hometown. As mentioned above, Rome and Florence played important and well-known roles in this respect. But they were not alone and Eliana Carrara's and Monica Visoli's recent book on city guides from the fifteenth to the eighteenth centuries takes a more comprehensive look at Italian travel literature, also taking into consideration the history of guide books as a literary genre and the debate between cities in their efforts for cultural supremacy.

Obviously, Florence must not be missing from this kind of survey and Jan Simane's chapter on "Firenze città nobilissima" (95-110) presents a number of guide books as well as the image of Florence they wished to convey. On the basis of a project located at the Kunsthistorische Institut, the author draws the attention to several city guides written on Florence by the above-mentioned Albertini, by Francesco Bocchi and by his contemporary Paolo Mini. Although their works constitute three individual books, their aims were similar: they attempted to point out the beauty and nobility of their hometown. To this end, in his Le Bellezze della città di Fiorenza the most famous of the three, Bocchi, not only gives a detailed account of famous buildings and works of art as part of touristic itineraries starting at the six city gates, he also discusses the reasons why these "beauties" need to be admired and appreciated by visitors. In sixteenth-century Florence, these literary descriptions were matched by the visual presentations of famous maps, for example by Stefano Buonsignori's plan of 1584.

In the case of Bologna, Carlo Cesare Malvasia's Le Pitture di Bologna (1686) remained the only guide book for over a century. Reedited and reprinted several times up to the advent of the Grand Tour, his work continued to be in use to fulfil Malvasia' original intention: he wished to offer an inventory of Bologna's cultural and artistic treasures. As a civic inventory the guide was tried to defend Bologna's position of cultural relevance against a supposed Florentine supremacy, as well as invite travellers from abroad to an established if contested must-see destination. According to Giovanna Perini Folesani (153-174), here and in his earlier Felsina Pittrice (1678), Malvasia showed himself as an ingenious cultural strategist and public relations manager.

Venice as "teatro del mondo" may have been less overshadowed by the fame of nearby cities but still seems to have found it necessary to present herself as "città nobilissima et singolare" in Francesco Sansovino's work of 1581. As stated by Cristina Panzera (63-94), it was a privilege to write about Venetian art and history and permission was not easily granted. Nonetheless, Sansovino managed to add to the success of his earlier Tutte le cose notabili e belle che sono in Venetia (1556) by the publication of his Venetia, città nobilissima, et singolare, Descritta in XIIII libri (1581). In his endeavour he was helped by the plans of the Venetian authorities to create and project a strong image of their city. Therefore, in his later and more comprehensive work Sansovino mixed urban structure and civic politics. The buildings of the city's sestrieri are described in detail and with great civic pride, while the liberty and equality of the Venetian citizens is also praised and explained as the effect of a skilful and just government.

Far from concentrating entirely on the usual suspects, the chapters in Carrara and Visioli's edited volume also include travel literature on Genoa (9-62), Milan and other Lombard cities (173-212) or Pozzuoli (213-244). The essays not only discuss the aims of guides in their particular relation to civic identity and the image presented to the outside world, they also very interestingly trace how such an image was shaped by a city's own political and cultural history and in competition with other cities' aspirations.