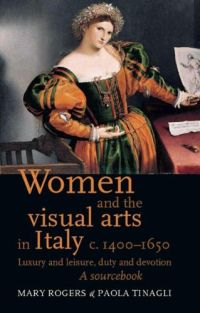 It must be a truth universally acknowledged that women live longer, are healthier and tougher; they are the majority of the world population. If they have not taken over world domination, at least in the civilised countries on this planet they are no longer barred from education, high-powered professions or the vote.

Every era in history has examples of heroic women fighting for their rights. The Renaissance in particular is often singled out as the time period when women successfully strove for better education and not only put their grievances about living in a man's world into words but published them in numerous treatises. Helped by rising literacy rates and cheaper books, women of early modern Europe may not quite have had a Renaissance but they certainly found a voice that we can still hear, understand and share today.

Paola Tinagli and Mary Rogers have added another important sourcebook to their last joint project Women in Italy, 1350-1650: ideals and realities (2005). In Women and the Visual Arts in Italy, c.1400-1650 they present women's opinions regarding a variety of categories related to the arts: fine, decorative, religious. Women are presented as patrons collecting art and commissioning architecture (123-155) who also order fashionable luxury items (53-67). They also feature in the roles of artists (279-305) and art critics (306-333) via a number of letters, excerpts from early modern published treatises and archival documents written mostly by but also for women. The collection is divided according to the book's four parts (I. The material worlds of women, II. Women secular art and artists: commissioning, buying, preserving, III. Women, devotion and art, IV. Female artists, craftswomen and writers). Each of these parts is given a short introduction and subdivided into chapters and subchapters. All texts are translated into English and specifically introduced.

In the general Introduction to the volume the two editors explain the rationale behind their selection of the text samples and their approach to the material culture (artistic, decorative, fashionable, devotional etc) present in increasing quantities in women's lives during the Renaissance. Not only was there an ever larger selection of objects to choose from, women were also increasingly the managers of the home provided by their husbands (22-36) or - if single, engaged in professions that made it likely they would stay single, or living in a nunnery (36-47) - they managed their own spaces as well as they might. Female voices and female achievements having gradually become the focus of (art) historical research over recent decades, the sources selected help to nurture and underpin current discussions about female spaces in palazzi, the set-up and furnishings of apartments, as well as questions about access and audiences. They also help to understand the masserizie depicted in the domestic interiors which feature so prominently among Renaissance art from the late fifteenth century onwards.

Basically, the book can be read in two ways: it gives an important glimpse on daily life in early modern Europe, on domestic material culture, on the relationship between patron and craftsman/artist and on the ways in which people ordered and consumed art, whether secular or devotional. In this sense the texts bear witness to a world shared by men and women, to a varying degree, and which was experienced in this form during a particular by-gone historical era at the beginning of modernity. Nonetheless, this collection of sources has also a second dimension to it. The virtual dialogue between texts written for and by women attests to the tensions between societal restrictions drawn up by men and the attempts of women to overcome these wherever and whenever possible. Sumptuary laws (72-86), the ban on females to commission or create works of art in their own name, and the exclusion of women from most professions only worked so far. Most of the women whose words we find included in the volume came from the privileged classes and therefore could afford to break some rules. What may be unexpected for the modern female audience is how much one is able to empathise with the feelings of these ladies of roughly half a millennium ago and how fresh and immediate their conversations sound to us. Theirs is an antagonistic world that at least some of them would have preferred not to share with deceitful men. If they were married, they usually had to sacrifice their scholarly ambitions, for example Moderata Fonte (Modesta Pozzi de' Zorzi) who died in childbirth before she reached 40 but had already completed an important work: In Merito delle Donne (The Worth of Women: Wherein is Clearly Revealed Their Nobility and Their Superiority to Men By Moderata Fonte, translated by Virginia Cox, 1997) to be published posthumously in 1600 (see for example 317-320).

Widowhood seems to have been often the start of a career in art patronage (161-163), sometimes out of grief at a husband's death when a portrait was commissioned, occasionally in an attempt to follow one's own inclinations when acquiring antiquities, although the husband's marital relatives may not have liked it. Portraiture has been given its own section (156-181), since it played such an important role at a time when elite women usually left their natal family far behind either to marry or to enter a convent; when wars and imprisonment may have taken their husbands (some were liked after all) and more importantly sons away from them at any time; and, when life was precarious, threatened by disease, famine, and warfare. Portraits were commissioned to remember the dead and those far away, but they could also be commissioned in preparation of marriage negotiations (157) or in order to commemorate a marriage alliance (158-159). Portraits of children, both small and grown-up, remind us of the fondness their parents or grandparents had for them (159-161).

We can today see the sitter and we can guess at the intentions behind the commission; it remains highly problematic though to judge whether the portrait is a likeness of the person portrayed. It is all the more important to have firsthand accounts and testimonials of what the sitter or patron thought of the results. Some may have been satisfied with what they got. Some other may have hoped for greater verisimilitude in the depiction (169-172).

As Moderata Fonte put it, ideally a painter should be an interpreter of character and thus be able to convey a timely warning: "Oh, if one could only find a painter or sculptor good enough to be able to portray from life the inherent nature of men, so that all the secrets of their hearts could clearly be discerned, so that their false exteriors could no longer deceive us in our naivety." (331-332)