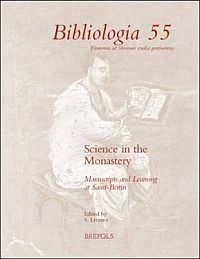 Former accounts of intellectual life in the later Middle Ages postulated that the traditional monastic orders did not play a role of significance in the study and transmission of scientific texts. However, a large body of published research - to which this book and its catalogue contributes - now highlights the involvement in university milieus of individual Benedictine and Cistercian monks, and their role in collating and copying key texts; annotating and compiling them; and finally also bringing them to regional markets. Furthermore this scholarship has also repeatedly drawn readers' attention to the fact that examining the contents of monastic libraries is one of the most efficient ways of verifying the institutional role of these orders with respect to the study and transmission of scientific content. Yet as Steven Livesey points out in the introduction to his book, quite a few such collections, particularly of Benedictine monasteries, continue to elude detailed research.

One such belonged to the abbey of Saint-Bertin in Flanders. While the magnificent collection of illuminated manuscripts that were produced under the aegis of Abbot Otbert (986-1007) is now well-studied, in contrast the abbey's late medieval collection of scientific manuscripts has so far remained unexplored. Livesey's catalogue fills that gap with impressive results. In the introduction he makes a strong case for the abbey's status as a major centre of the study of natural philosophical tracts, beginning in the ninth and especially the later tenth century and continuing until the very end of the medieval period. Also of note is the author's carefully crafted and solidly supported argument about Saint-Bertin's involvement in the rise of Christian Humanism, an argument that transitions to another regarding the abbey's role in the production and study of relevant manuscripts in university circles. Likewise impressive is Livesey's treatment of evidence relating to the role of individual monks in relaying key works and their interpretation to regional centres, including to Saint-Bertin itself. And so is the section titled 'Benedictine science at Saint-Bertin', which relies on the extant manuscripts from the later medieval collection to provide a detailed reconstruction of how community members used and read (and in some cases annotated) the texts.

The second and larger part of the book is a detailed catalogue of the preserved manuscripts with scientific texts from Saint-Bertin's late medieval library, all of which are now kept at the municipal libraries of Saint-Omer and Boulogne-sur-Mer. Exhaustive by design and meticulously annotated, it is the first such endeavour to present these volumes as a collection, and to look for shared patterns in composition, layout, decoration, and annotation. Furthermore it provides all the technical and bibliographical detail that codicologists will be looking for, as well as information on the decorative schema. Three appendices list second folio references, medieval and modern shelf marks, and a select number of bibliographical references.

Specialists of late medieval intellectual life and book culture will find many things of interest in these pages, including a number of methodological observations on how to reconstruct ownership of manuscripts via so-called second folio references. The same is true for those who work on late medieval monastic culture in general, for whom Livesey's book will contain a great deal of new insights. While the author might have insisted more on the innovative nature of his research and the significance of his findings for all of the above-mentioned fields, his work will undoubtedly be used intensively for years to come.