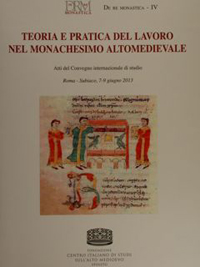 This fourth instalment in the De Re Monastica series brings together works by 20 Italian historians and archaeologists on the relationship between Western monasticism and labour. Originally presented at a conference held in Rome and Subiaco in June 2013, the volume has a strong focus on the Italian Peninsula. There is much to interest specialists in religious and ecclesiastical history here, particularly since no comprehensive monograph or collection addressing the ideological and practical dimensions of physical activity in late antique and medieval Western monasticism currently exists. However, the lack of editorial coordination and the authors' extremely diverging interpretations of what constitutes 'work' as an analytical category, prevent the collection from presenting a cohesive argument.

The volume can be roughly divided into three parts - not that this is indicated in any way by the order in which the papers appear. The first part looks at views on labour in the late antique and medieval periods, with the analysis relying heavily on written evidence, particularly commentaries and rules. Alba Maria Orselli's paper investigates the place of physical labour in such texts in the earliest phase of Western monasticism's history, providing the most subtle and erudite argument in this collection. A highly worthwhile contribution to the subject, it deserves a much wider audience than that of scholars interested primarily in Italian monastic history. Giovanni Spinelli takes us to the reforms of the early ninth century, arguing that Benedict of Aniane almost completely ignored the subject, leaving a gap in his reform agenda as regards the practical aspects of life in the cloister. Finally, Glauco Maria Cantarella investigates Cluny's attitudes to manual and other labour, and its response to twelfth-century criticism of its focus on liturgical service. More modest in scope and argument than the two previous papers, it addresses a subject that has, of course, been looked into many times by international experts.

A second group of papers concerns intellectual labour. In several of these, readers will note that the authors' definition of the subject is extremely broad. For example, this is the case for the treatment of scriptorial activity (by Giuseppa Zanichelli), library and archival organisation (by Maria Carla Somma), and imaginary voyages to the Holy Land (by Michele Voltaggio). In this respect, the contributions of Luchina Branciani (on how the early modern Cronache Sublacensi rely on St Benedict's views on labour to promote changes in the observance of monks) and Marianna Cerno (on labour as a theme in high medieval hagiography) seem distinctly more relevant to the main topic of this publication. Further insights are provided in Franco De Vivo's piece on the representation of labour in English monasteries in the High Middle Ages, and a text by Francesco Santi on the Liber de cultura hortorum by Walahfrid Strabo.

Moving from the intellectual to the 'practical', a final set of seven chapters shifts the attention from the relationship of monks with physical labour or intellectual activity to their involvement in institutions providing economic activities. Case studies by Francesca Romana Stasolla, Chiara Carloni (Farfa), Paolo Rosati (St Scolastica and Benedetto), and Giulia Maggiore (San Salvatore al Monte Amiata) all look at the problem of monastic dependencies, their organisation and their impact on regional economies. Paola Galetti returns to earlier times with a discussion on monastic ownership and exploitation of the mills from the ninth to the eleventh century, while Fabio Redi considers twelfth-century Benedictines' exploitation of pastures and their use of granges. Towards the end of the volume, we find a more comprehensive case study by Pio Pistilli and Giovanni Barco of a monastery's exploitation system in a Mediterranean context, plus an overview by Sonia Antonelli of ceramics production in a monastic context. Both of these latter contributions are heavily informed by archaeological fieldwork.

Overall, the editor of the volume should be applauded for keeping both the subject of monastic views and practices of labour on the agenda, particularly since in recent years socio-economic topics have come a distant second to other areas of interest in monastic studies. However, the lack of a clear organisational approach to this volume gives weight to the impression that there really is no clear focus to it, paradigmatic or otherwise. This is also supported by the fact that there is no evidence from the contributions of any attempt being made to compile the collection in such a way that it is representative of specific paradigms or current debate in the study of monastic labour, or covers a specific, complementary range of topics. This reviewer also found no statement indicating where the study of this particular subject is headed, and what shared research agenda can be drawn from the many different approaches represented here. Surely, a succinct introductory chapter would have remedied some of these issues.