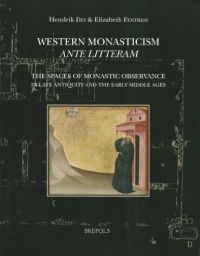 Originally conceived as a collection of papers presented at the American Academy in Rome in 2007, this volume is far more significant, and far more thought provoking, than the average conference proceedings. The objective, according to Hendrik Dey's introduction, was to investigate the formative centuries of the cenobitic model from an innovative perspective, where the tension between normative ideals and practice is actively explored. The key concept in this exploration is "space"; but the editors have - and in this case this has been a wise decision - neglected to impose on their authors a specific, limiting definition. By keeping the concept deliberately vague, they have allowed for analysis and discussion of the broadest possible range of subjects, relating to the representation, description, and realities of space. While such a line of reasoning may go against scholarly intuitions, in this case it has proven conducive to significant new insights. Most importantly, it has allowed the editors to conclude that the still pervasive narrative of early medieval monastic development as the forerunner of later, more homogenized incarnations of the cenobitic ideal, "appears as anything but a foregone conclusion". However, laudable as all this may be, this reviewer could not help but notice that the introduction nevertheless contains several passages where the evolutionary narrative persists in surfacing: so there is talk of the "ultimate triumph of the Benedictine ideal in the post-Carolingian period" and "the eventual predominance of Benedictine monasticism" arguments that are explicitly rejected elsewhere as "teleological" (and rightly so!). This only shows how difficult it is to escape the simplistic yet attractive narrative of monastic development as established in the early modern period, and how deep the chasm is between scholarship of Late Antiquity/Early Middle Ages and the central medieval period, beginning with the Carolingian reforms. This book may, in fact, represent the first phase of cenobitism as too unique, or too distinct from later periods, than is warranted by medieval realities. For instance, Dey's claim that the response of ascetics in the face of "putative norms and rules" was either one of acceptance, tolerance or rejection, is valid also for later periods, at least until the emergence of the monastic orders.

The volume consists of two sections, one focusing on textual legacies from Late Antiquity and the Early Middle Ages, the other on material culture and archaeological evidence. The geographical focus is on the West, with some excursions into the early Muslim world. As can be expected with this kind of volume, not all articles offer significant new insights, or were written in pursuit of paradigmatic shifts. The highlight of the first group of papers is Albrecht Diem's reassessment of the development of normative texts in early Western monasticism, in which he attempts to formulate an alternative (and, inevitably, significantly more complex) narrative to the one that has been popularized since the eighth and early ninth centuries and which continues to dominate scholarly discussions. Other chapters, respectively dealing with transitions from the secular to the monastic in Primulacium (by Roberto Alcati), early female communities (Lindsay Rudge), and the social space of North African asceticism (by Leslie Dossey) respectively, warrant a readership broader than one consisting of specialists only.

The second section, on material culture and archaeology, somewhat redundantly includes discussions of the Ribat settlement in the Islamic world (Hugh Kennedy and Yumma Masarwa); apart from their individual merits, these articles are mainly interesting because they show that the diversity emerging from the Western, Christian evidence is in fact nothing to be particularly surprised about. The next three papers, focusing on Italy (G.P. Brogiolo, M. Ibsen, and Santangeli Valenzani) and the Balkans (Silviu Anghel), highlight the way in which various incarnations of the cenobitic ideal, including the eremitical, shared spaces and experiences of space with secular society to a much larger extent than has often been noted. The two final contributions are more directly concerned with the archaeology of early monasticism, with especially that of Kim Bowes ("Inventing ascetic space: houses, monasteries and the archaeology of monasticism") offering a positively challenging outlook for further research.

The concept of this volume, and its refreshingly intuitive approach to the problem of space, has resulted in a number of insights and new perspectives for specialist scholarship that transcend what historians usually imagine when talking about space and spatial experiences. As suggested in the introduction, the discussions touch upon the very core narrative of monastic development as it has been current for several centuries. It is in a sense good, but also unfortunate, that the focus of this collection is only on the first phase of monasticism; surely a similar effort for later periods, in particular the ninth to eleventh centuries, should now be a major priority.