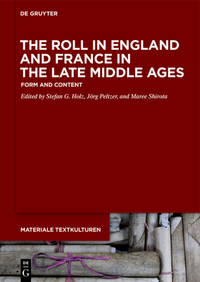 The use of rolls alongside codex-formats to record texts in the Antique and Medieval worlds has been discussed for a long time in textbooks for the study of palaeography and codicology. This administrative practice has been especially associated with the expansion of literacy and the growth of the English Crown's Exchequer from the twelfth century onwards. Since 2017 the interest in the practice of enrolling text has been revived thanks to two projects and colloquia run by research groups at the University of Heidelberg, under the direction of Professor Jörg Peltzer in collaboration with Professor Jean-Marie Moeglin (Paris IV), and at the University of Wuppertal, under the direction of Professor Jochen Johrendt in collaboration with the Università Cattolica in Milan. [1] These two collaborative projects have opened up the debate to consider use of enrolments across Late Medieval Europe, not only in England but also in France, Italy and Germany.

The Roll in England and France in the Late Middle Ages gathers ten papers from proceedings of the conference held in Heidelberg in 2017. As Peltzer clearly states in his introduction, on this occasion English, French and German scholars were invited to focus on the materiality, form and format, and praxeology and use of administrative, genealogical and amulet rolls in England and France between the twelfth and the fifteenth centuries. The essays examine a comprehensive range of case-studies, raising important questions about the cataloguing and preservation of enrolments in local and central archival repositories as well as about their codicological and palaeographical features and practical usage. The tone for this approach is set in Roche's article on the rolls preserved in the Archives départementales de l'Eure, where the challenge for scholars interested in researching the materiality, format, size and layouts of Medieval enrolments using often inadequate catalogue descriptions is clearly stated. Attempting a taxonomy of these records, Roche distinguishes the use of enrolments as public records, which had a degree of flexibility in terms of layout, number of membranes and size, and as internal administrative records, recording deeds, inventories, accounts and financial transactions, especially in the context of monastic institutions. Roche's contribution is followed by two essays concerning the praxeology of Late Medieval enrolments as judicial and financial records in France. On the one hand, Laloum examines the dispute of 1276 between the chapter of Notre-Dame in Paris and the abbey of Saint-Martin-des-Champs, documented in 15 parchment rolls that record the stages in Romano-canonical procedure followed during legal proceedings. Laloum especially emphasises how the rolls were produced for the benefit of the chapter of Notre-Dame in order to record evidence and witness statements that were annotated for use during the legal proceedings, and also focuses on their later preservation at the Archives Nationales in Paris. On the other hand, Helias-Baron examines the 1362 financial records of the Cistercian monastery of Notre-Dame du Vale, registered in a roll of 9 parchment membranes written in the vernacular and in chancery hand by a professional scribe. Helias-Baron emphasises the practical advantage of using an enrolment as support for recording information "on-the-go" that was for the use of a royal official in the aftermath of the Jacquerie Revolt and the treaty of Brétigny-Calais and re-used for later financial assessments of the monastic estate in the fifteenth century.

The French case-studies are followed by four essays concerning English administrative enrolment practices. Vincent's essay opens this section, returning to the question of the traditional use of rolls in English administrative practices. Vincent convincingly shows how the scholarship up to the nineteenth century perpetrated a picture of English exceptionalism focusing on what he defines as the "symbolic mystique of the rolls". Vincent further reflects on the symbolic value, based on the common iconography of the Evangelists in Medieval art, and the practical administrative convenience of using enrolments, which were more transportable and flexible as supports than a codex. To demonstrate those points, Vincent investigates the praxeology of roll and codex, focusing on the Doomsday Book, its compilation and later incarnations in the thirteenth and early fourteenth centuries, and the pipe rolls that enrolled financial records county-by-county alongside other series of complementary financial enrolments and documents. In conclusion, Vincent maintains that the special use of financial enrolments in England "helped to mould the state's identity" from the twelfth century onwards, "thickening", "evolving" and "maturing" up to the nineteenth century and beyond. Vincent's argument is taken forward by Cassidy and Holz. Cassidy focuses on the Exchequer and the relationship between the compilation, format and praxeology of the pipe rolls and their complementary financial records, notably the memoranda rolls, local manorial records, demesne management and custodian sheriffs' accounts, that were abandoned after the thirteenth century as they were deemed too complex and expensive to run. Likewise, Holz examines the Wardrobe records and the onus scaccarii rolls that enrolled the internal communication between this department and the Exchequer. Holz maintains that in this case rolls were preferred to books, employed by the Wardrobe to record financial transactions and easier to read and use, because of their flexibility in recording intermediary forms of communication among administrative departments, and the importance of routine practices in defining institutional identities in the English Crown's administrative departments. Finally, Papin examines the interesting employment of rolls as support for the cartulary of the Welsh Cistercian monastery of Margam between the twelfth and thirteenth centuries, discussing regional influences on the administrative practice of monastic communities in the Welsh borders that can be connected to local lay patronage and contemporary royal administrative practices despite the inconvenience faced in their use and consultation.

The comparison between French and English use of enrolments moves to genealogical and amulet records in the last three essays of the volume. Norbye examines the survival of the fifteenth-century French genealogical chronicle A tout nobles in codex and roll formats, sketching out a very complex scenario where the two forms of support coexisted. When addressing the praxeology of the two formats, Norbye maintains that while the roll was a better support to visualise diagrams of dynastic connections, the codex was more convenient and practical for readers because of the size of genealogical rolls, and it could better accommodate later additions. Similar questions are posed in Shirota's essay, who focuses on the interesting example of fifteenth-century English genealogical chronicles written in hybrid rolls-codex formats, notably parchment accordion genealogies. Shirota maintains that accordion genealogies were hidden forms of rolls, requiring more material than the traditional codex because of their layout, and convincingly connects their use to the reign of Edward IV and Yorkist circles during the War of the Roses. Finally, Storm Hindley addresses the use of amulet rolls in Medieval England, focusing on their small, narrow and long format, highly suitable for transport, and the importance of their symbolic value for supernatural and magic communication that ultimately justified their impractical layout, writing orientation and format.

This volume is a valuable contribution to the scholarship on Late Medieval literacy and documentary production for its focus on materiality and praxeology, its comparative perspective, and its variety of case-studies, ranging from administrative enrolments to genealogical and amulet rolls. As Moeglin points out in his conclusions, the approach of this project sheds new light on at least two outstanding issues: the variety of material forms and formats commonly defined as rolls; and the merit of addressing the relationship between texts, their genre, the materiality of their support and their use in different chronological and geographical milieux and bureaucratic frameworks. It is hoped that his approach will be further investigated in the future, for instance broadening the chronological scope of the investigation to the Early Middle Ages and to case-studies from other regions and questioning the shift from roll to codex further.