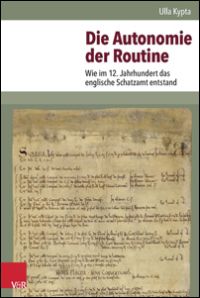 Ulla Kypta's study on the Exchequer in the twelfth century fits originally into the long-standing historiographical debate on the rise of literacy and processes of bureaucratization in England in the High Middle Ages, initiated by Michael Clanchy in his seminal work From Memory to Written Records (1979) and developed in several specialized works in Anglophone scholarship. The author particularly engages with the question concerning the formation of the Exchequer as an office, specifically focusing on the records and their archival organization.

Within this debate the author especially engages with the issue concerning the original contribution of its personnel to the creation of the Exchequer. The originality of the book undoubtedly lies in its approach to the Exchequer records, namely the Pipe Rolls, through a methodology borrowed from the Historische Semantik, which analyses the language of documents as evidence of the formation and products of cultural environments. This examination of the records is set up in chapter 2, providing an interesting codicological, palaeographical and terminological study of the Pipe Rolls, which ultimately allows the author to show how the language of these records was routinely used and ultimately standardized through the twelfth century.

The big question arising from this examination of the records concerns the consistency of the standardization of Exchequer's records and the professionalism of those involved in their creation. In chapter 3 Kypta therefore specifically addresses the terminology of the records through a careful examination of formularies, standard terminology and abbreviations, convincingly reaching the conclusion that the officials involved in the production of the Exchequer's records learned their professional skills through practice rather than formal training ("learning by doing" as the author points out in chapter 3.2.2). In light of such interpretation of the records, the author also engages with the nature of the notorious twelfth century Dialogus de saccario, in the past mainly seen as the product of an office (namely the Exchequer) which was consciously reflecting on its own functions and activity. In Kypta's views the Dialogus de saccario was not originally compiled as a theoretical textbook to train officials in their job, but as a summary of practical information for the use of the Exchequer's personnel, who were ultimately "technicians" rather than "professionals" - indeed, as the author points out the title Dialogus de saccario is an eighteenth century creation and the work was originally called De necessariis observantiis saccarii.

Chapter 4 of the book is further dealing with the language of the records, more precisely focusing on its development and adaptability throughout the twelfth century. In this chapter, Kypta compares the Pipe Rolls's language with that adopted in other contemporary enrolments of the English Crown dealing with financial transactions (Rechnungssprache), such as the Fine Rolls, the Originalia Rolls, the Curia Regis Rolls, the Memoranda Rolls, the Rotuli de Dominabus and the Close Rolls. This interesting comparison focuses on the internal structure as well as the language of these records and allows the author to conclude that the standardization of these records was characterized by variety and diversity among different enrolments, and that the language of the Pipe Rolls was adapted over time in the twelfth century, mainly due to political circumstances. This process, in Kypta's words, ultimately led the King to delegate territorial administration to his officials, making him both an abstract interlocutor in the Pipe Rolls and a concrete beneficiary of the financial transaction, as stated in the receipts. The conclusion is that throughout the twelfth century the Exchequer developed from a temporary department, mainly managed by the barons of the Exchequer (barones de saccario) to an organization (namely the saccarium), which could properly reflect on its identity and was legitimized through its records, as the Dialogus de saccario indicates, outlining the responsibilities of the office and serving as depository of knowledge. Indeed, in Kypta's opinion this transformation is mainly evidenced in the terminology of the records and their development between 1125/30 and the end of the twelfth century. Finally, in the thirteenth century these developments were implemented and legitimized through the creation of similar accounting records, such as the Winchester Pipe Rolls, once more as a reaction to domestic conflicts and baronial rebellions.

Despite a few misplaced references, such as one to Benedict VIII at page 49, this work arguably provides an original reading of the Pipe Rolls thanks to its use of new methodologies borrowed from the field of linguistics. Accordingly, its careful examination of the codicology, palaeography and terminology of the Pipe Rolls represents an interesting contribution to the scholarship on these records. In this respect, the book is undoubtedly very different from classic studies of the Exchequer and its records produced in the Anglophone historiography and raises seminal questions concerning the processes of bureaucratization and institutionalization that ultimately provided the foundations for the formation of the Modern State.