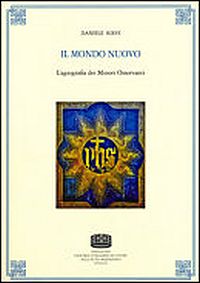 Under the captivating title Il mondo nuovo (the new world), Daniele Solvi gathers twelve of his essays on the hagiography and hagiology (i.e. the theory of Christian perfection) elaborated by the Italian Observant Franciscan friars during the Quattrocento, mainly from Bernardino da Siena's death (1444) to the crystallization of his cult within the Order and the failure to obtain a similarly quick canonization of Giovanni da Capestrano (c. 1485). Hence, the essays - written between 2009 and 2019 [1] - allow to look at the complex and unpredictable process that brought this religious group from being a liminal eremitical movement within the Franciscan Order to become a major player in the Italian society as well as in a broader European context, in which the Italian Observants had a prominent role in the strategies elaborated by the papacy to (try to) reaffirm its centrality in the Church.

As Solvi states clearly, hagiography was a "scheme to interpret reality" (45) adopted by the Observant spokesmen. It provides us today with "a privileged tool to understand how the friars translated the religious experience into self-consciousness by pinpointing their specific role within the Church and the salvific history and how they elaborated an original 'theory of Christian perfection' in narrative forms" (86; here and below, the translations are mine).

Why is this a new world? According to Solvi, the Observant hagiography developed the image of "a world that revives" (IX) by emphasising the impact that - according to a divine salvific project - holy preachers had on the whole (Italian) society. This process implied a new ideal of Franciscan saint, which differs from that of the origin. The Observant saint is portrayed not so much as herald of eschatological times but as a protagonist of a transformative engagement within history. At the centre of this hagiographical elaboration is action in society, which culminates in preaching to the people and in collaborating with the papacy to the edification and affirmation of the (papal) Church.

These elements are particularly evident when considering Bernardino da Siena (d. 1444) and Giovanni da Capestrano (d. 1456), the towering figures of this volume. In hagiographical descriptions, Bernardino was presented as a new apostle, whose sermons were able to convert large crowds and to re-create a truly Christian society. One of the strengths of the volume is Solvi's extensive knowledge of the many vitae written before and after Bernardino's canonization (1450) as well as of the previous Franciscan hagiographical tradition. The volume, indeed, is the ideal complement to the ongoing publication of the vitae of Bernardino.[2] The attentive analysis of these texts allows to trace the evolution and transformation of the hagiographical memory of Bernardino according to different (and at time competing) priorities. I give just one example of the way Solvi unlocks this type of text: the centrality of action in the construction of this saint becomes visible in the anonymous legend Virgo, where the expressions used by Bonaventure to introduce the stigmatization of Francis are echoed to introduce Bernardino's choice to engage in preaching (119).

One of the richest chapters of the book deals with the re-use of previous Franciscan models in the vitae of Bernardino (161-195). For instance, the chapter shows the shift from alter angelus to alter apostolus in the life written by Ludovico da Vicenza (173): the choice was revealing since this was a key text, commissioned to a leading friar and then adopted by the 1484 Observant Chapter for the liturgy. The evolution of the hagiographical discourse - which intertwines with the fight between the Observants and the other friars - accompanied and contributed to the affirmation of the fratres de familia not only as a virtually independent religious Order but also as the true heir of the whole Franciscan history. As Solvi puts it sharply, this hagiographical discourse was essential to defend a blunt paradox: "the formal betrayal of the Order, with its hierarchies and structures, was legitimated as the highest and most authentic form of Franciscan fidelity" (195).

In the production and reproduction of the Observant identity, the liturgy played a crucial role. Solvi aptly calls the attention to the texts specifically written for this purpose, in particular the office composed by Giovanni da Capestrano for saint Bernardino (135-158). While perhaps the claim that this text is "the real cornerstone of the hagiographic corpus of the Observance" (158) is an exaggeration, Solvi effectively demonstrates that Giovanni concentrated here the essential elements of his idea of Bernardino as champion of the Observance - or better, of the Observance and its historical mission according to Giovanni. I propose two observations on this text. First, it is noteworthy that the list of virtues omits obedientia (142), possibly because the Observants were accused by the other friars to break away from due obedience to the Order's hierarchy. Second, in a sophisticated way, saint Bernardino is depicted as a luminous circle with twelve rays that contains the name of Jesus, that is to say, as a living embodiment of the trigram IHS that he used in his mission: "O sidus et spectaculum | irradians per circulum | distinctum bis senarium | triumphans nomen melitum | super quodcumque conditum" (155).

In line with a recent trend in the scholarship on the Observance [3], Giovanni da Capestrano is the main protagonist of the volume. Immediately after the canonization of Bernardino, in which he played a fundamental role, Giovanni was perceived by his fellow friars as the next in line to become an Observant saint, so much so that his gestures were consciously recorded by his companions with this goal in mind. His death in the aftermath of the "miraculous" defence of Belgrade against the Turks in 1456 seemed a perfect springboard to achieve this result and fostered the immediate call for his canonization. Solvi acutely points out the existence of two different lines of reasoning in the elaboration of the hagiographical profile of Giovanni da Capestrano. Authors such as Giovanni da Tagliacozzo, who was one of Giovanni's companions in 1456, focused on his quasi-martyrdom in Belgrade. Instead, Nicola da Fara - who became the 'official' hagiographer - indicated as the overarching theme of Giovanni's life the service to and defence of the faith, expressed mainly by his obedience to and strict collaboration with the popes. It is here that the image of Giovanni as column of the Church is elaborated: Solvi underlines the apostolic meaning of its Biblical echo (255, with reference to Galatians 2.9), to which one may add also an implicit reference to saint Francis as pillar of the Church in the famous dream of Innocent III.

Mirroring closely one of the historical traits of Giovanni's mission, Nicola da Fara portrayed his life as "under the sign of Rome" (259). The friar is presented as close collaborator of the popes in reaffirming the centrality to the papacy. Thus, in this presentation the "theocentric perspective of Francis [...] became now Roma-centric", with a substantial identification of the celestial Jerusalem with the papal city (271-272). In light of this, it becomes clear that the mission of Giovanni da Capestrano beyond the Alps was opposed by many Franciscan friars - like those in Saxony - who refuted this mondo nuovo dominated by Rome and its emissaries.[4]

While the campaign for the canonization of Bernardino was a brilliant triumph for the Observants, that for Giovanni was a remarkable fiasco. Strictly speaking, while Bernardino is a fifteenth-century saint, Giovanni is not: his canonization would happen only in the much-changed historical context of late seventeenth century. Perhaps, one might say that Giovanni lacked the energetic and skilful support that he himself had provided to Bernardino's canonization process. More in general, notwithstanding a host of suitable candidates, the hagiographical 'laboratory' of the Observants was able to produce an abundance of texts - a goldmine for scholars today - but not to achieve another solemn canonization. People like Giacomo della Marca, Alberto da Sarteano, Filippo dell'Aquila, Marco da Bologna, Bernardino da Feltre were confined to a local veneration and a memory within the Order. Solvi does not address directly this set of issues and gives little space to these other figures. Yet, he hints at a possible explanation by remarking that, once the Observant friars "secured their ecclesiastical and social position, they became less attentive to [consider] the signs of holiness as divine confirmation of their choices", they became indifferent to a way to validate their actions that had been vital when their future was still uncertain (58).

I believe it would be interesting to investigate with equal intensity the hagiographic production concerning these other 'minor' candidates to sanctity. Only Giacomo della Marca and Bernardino da Feltre received comparable attention - but much remains to be done in this direction, and indeed even the hagiographical corpus on Giovanni da Capestrano awaits a proper edition. While Solvi guides well the reader along the Franciscan paths, a comparison with the parallel developments in other religious orders remains to be done. Possible staring points might be the Dominican Antonino da Firenze (d. 1459), who is the only other Observant canonized in the period (1523), and Niccolò Albergati (d. 1443), whose diplomatic missions across Europe are comparable to those of Giovanni da Capestrano.

Overall, the volume represents a solid contribution to a better understanding of both fifteenth-century hagiography and the cultural and spiritual development of the Italian Franciscan Observance. Thus, the book will be a welcomed addition for those working on early Renaissance Italian culture and history. Moreover, it is also a timely reminder of the richness of this type of text when they are interpreted with marked sensibility for their language and Sitz im Leben (e.g. their liturgical use) as well as for the historical context and dynamics that prompted their production. The attention that the leaders of the Observant movement paid to this genre clearly attests to how much they considered it strategic: hagiographical texts were conceived as major tools in a spiritual, cultural, even political campaign. They need to be addressed as such, and Daniele Solvi's volume does it convincingly.

[3] The renewed interest in Capestrano is mainly due to the international research group lead by Letizia Pellegrini. Among the most recent collective volumes, see the special issue on Capestrano in: Franciscan Studies 75 (2017), 1-273 (editors Bert Roest / James D. Mixon) and Pawel Kras / James D. Mixson (eds): The Grand Tour of John of Capistrano in Central and Eastern Europe (1451-1456): Transfer of Ideas and Strategies of Communication in the Late Middle Ages, Warsaw 2018.