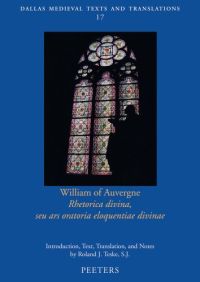 The work of Roland Teske offers to the readers a new semi-critical edition of William of Auvergne's Rhetorica divina and its first translation into a modern language. Thus, this work provides a much-needed instrument for renewed attention to, and investigation of the thirteenth-century bishop of Paris's masterpiece on the ars orandi.

The Latin text is based upon the 1674 edition in William's Opera omnia (reprinted in 1963) and two fourteenth-century manuscripts: Avranches, Bibliothèque municipale, 124 and Dijon, Bibliothèque municipale, 217. Teske does not explain the criteria for the choice of these manuscripts, however in the list of 41 manuscripts given by Jennifer Ottman they are among the earliest witnesses of the text. [1] The principal contribution of the two manuscripts is the recovery of a lengthy lacuna of the 1674 edition on the themes of the distractions in prayer (with the image of the flies and of the Holy Spirit that flees the cor muscosum) and the petition of tears. While waiting for a proper critical edition (which was not Teske's ambition nor the aim of the series that welcomes his work) [2], one can note that this interesting section was also present in the 1483 first printed edition of the Rhetorica Divina (although there are some omissions in the long prayer for the gift of tears). [3]

Teske's introduction (1-16) gives the readers some information on the structure of William of Auvergne's text, its place among the author's works, and the development of the artes orandi genre. However, it lacks a proper presentation of William of Auvergne's life, which could have been helpful in framing his work. A more elaborate introduction - and also a larger bibliography - would have enhanced the volume. The section on the artes orandi mainly recalls Barbara Jaye's contribution on the topic [4], while the presentation of the Rhetorica divina rightly goes beyond the consideration of the interplay of William with classical rhetoric - the most famous aspect of his text - to point out the relevance and richness of the other parts of this work. Although the comparison between prayer and secular oration occupies the largest part of the text, this is actually only the first of seven perfectiones or differentiae that characterise prayer, which in William's work is limited to its petitionary dimension, identifying in the first chapter oratio and petitio (27). The other six perfections are the likeness of prayer to a messenger, to a canticle, to the calves of the lips (vitulus labiorum), to incense smoke, to a sacrifice, and finally to a wrestling match with God.

As Jaen-Yves Tilliette pointed out, the term differentiae indicates "une méthode d'investigation philologique" that consists of finding the essence of something by decomposing its term into the different meanings and analysing them separately [5]. From this perspective, Tilliette suggests looking at the comparison between prayer and forensic oration as an allegory rather than a strict application of Ciceronian oratory. In fact, paradoxically, in this case the oratio was not intended to move the judge, because God is immobilissimum, but to transform the person praying, and make him or her suitable to receive the mercy of God (34). William of Auvergne has splendid pages on this point and his text is indeed also a treatise on the cooperation between the mercy of God and the liberty of the human being. In this way, it is indeed a treatise on grace. The aforementioned section on the petition of the gift of tears underlines that they can transform the most hardened heart, therefore the suggested prayer is: "Lord of mercy [...] grant to my prayer this power and strength [i.e. the tears] in order that it may [...] even force you to be merciful" (201). The same paradoxical logic shines in the last section, in which - starting with the biblical episode of Jacob's wrestling with the angel - William depicts prayer as a wrestling match with God. He explains the best strategy or skill (a loose translation for astutia luctandi) to win against an adversary who is much stronger. The key point is to use the adversary's own strength. One has to be humble, to renew oneself removing one's own vices and sins, and above all, to trust in God. In this way the adversary becomes an ally and what has begun as "wrestling with God or against God" (417) soon becomes another thing: "Then, the Lord will be with you in this wrestling" (425). The astutia is to transform a "lucta cum Deo seu contra Deum" into a situation in which "erit Dominus tecum in lucta ista". Instead of a fight, it becomes a sort of dance based on cooperation, balance, mutual support, and - most of all - trust.

One could give many other examples of the richness of William of Auvergne's text, but the point is already made. Most significantly, it allows a glimpse of the potential that this new edition holds for both those familiar with Latin, and a larger audience of scholars and students alike. Without losing the possibility and pleasure of looking at the original Latin text, this translation offers excellent access to the dimension and function of medieval prayer, which deserves considerable attention when one considers how important it was to medieval religious life. In fact, William's text not only presents a discussion on prayer, but also combines it with broad and elaborate examples of prayer. These examples were thought to serve as models, and provide us with vivid glimpses of the spirituality and religious culture elaborated and proposed in the exceptionally rich intellectual context of the thirteenth-century Paris. The work of Robert Teske - who has already made a tremendous contribution in translating many texts of William of Auvergne and offered a distinguished insight into his philosophy - has laid the groundwork for a much needed reappraisal of the Rhetorica divina and called for a renewed scholarly attention to it. Hopefully, thanks to Teske's work, the risk of William of Auvergne's text being - as Tilliette said a few years ago - "si souvent cité, si rarement lu" might be definitely avoided.