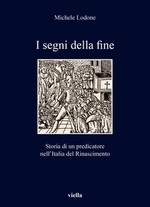 "I say that God wants [...] to spoil everything. Blood will be everywhere, blood in the streets, blood in the rivers, we will go afloat in blood: lakes of blood, rivers of blood!" (275; all translations by the reviewer).

These are some of the words that the Franciscan friar Francesco da Montepulciano preached in Florence on 18 December 1513 from the pulpit of Santa Croce. Or rather, they are an echo transmitted by those who fixed on paper a sermon that caused a commotion in the city. A commotion that was increased by the fate of the friar, who died a few days later, before clarifying (as requested by the authorities) the meaning of his sermon, i.e. whether it was a prophecy and, if so, what its foundation was.

The episode was known by scholars, but never explored in depth, often hastily counted among the revivals/trivialisations of Savonarola's preaching or among the signs of unrest in early sixteenth-century Italy. In an exemplary manner, also from a methodological point of view, Michele Lodone brings this sermon and this friar into focus. His work is framed as "a book of microhistory", meaning - in the footsteps of Carlo Ginzburg - the desire "not to blunt or flatten the singularity of each source", since their intrinsic limit is a sign of the complexity of the story (10). Moreover, Lodone underlines that it is precisely "the gaps and contradictions of the sources that will allow us to grasp the depth, which is the depth of the real life from which they come" (23). The task is successfully achieved, offering the reader an intellectually compelling journey.

The book is divided in three parts. The first traces the Florentines' reactions to the sermon. Framing - according to a solid historiography - the sermon "as a collective performance" (21), Lodone masterly shows how different listeners reacted to what the preacher said according to their own (political and religious) expectations. Moreover, the sermon - by entering into the public discourse - had an impact even on those who were not in Santa Croce, but heard about it by others or saw the listeners' reactions. Thus, Machiavelli, the Savonarolan world, and finally the Medici (Florence had been reconquered by them just a year earlier) had clearly different reactions. Overall, it emerges how the sermon was a mixture of words, gestures and emotions, "an invitation to penitence through a sequence of emotions experienced and 'performed' by the audience together with the preacher" (22), as it is possible to understand it through the lens of the most attentive city chroniclers. Lodone rightly emphasises how Francesco's preaching cannot be reduced to the slogan of the 'pastoral of fear', because gloomy threats were only one of the instruments of a "pastoral of emotions" (21), where terrifying announcements were followed by the promise of mercy.

The second part focuses on the sermon text and its interdiscursivity with the previous prophetic/apocalyptic traditions. Indeed, "if the Florentines assimilated [...] Francesco da Montepulciano's preaching to Savonarola's, it does not necessarily follow that he was a follower or imitator of the Dominican friar" (66). The survey of the textual tradition of the sermon (15 manuscripts and 6 printed editions) highlights how it was framed in different ways, emphasising its penitential or prophetic value. In the interpretation of the sermon, in addition to the exegetical tradition of the liturgical pericope - the little apocalypse of Matthew 24 - Lodone emphasises the prophetic experiences with which listeners may have associated what was said - not only Savonarola but also the Franciscan Amedeo Munez da Silva - as well as the texts probably closer to a conventual friar and reformer like Francesco, who "shared neither the myth of Florence reactivated by Savonarola, nor the confident messianism of Amedeo" (109).

Lodone shows well how the prophecies, as well as the life choices, of Francesco da Montepulciano depend on a lasting Franciscan tradition, which goes from the late thirteenth century to the early sixteenth century, "linking the spirituali [...] to the first Capuchins" (120). Lodone points out how this strand passes not only through main texts, but also through a galaxy of 'spurious' works, such as the prophecies attributed to Francis of Assisi. If "the concrete readings of Francesco [da Montepulciano] elude us" (127), as do the places where he came across them (in 'dissident' hermitages or in the main convent libraries?), Lodone identifies well the family of texts that, in all probability, this friar knew. The link with this tradition provides also legibility to other elements of this friar's life. His action is connected with reform experiments, also of eremitical nature, promoted among the conventual friars. His retreat to the hermitages of the Gargano and then his departure due to the urgency of preaching ad populum in the face of what he considered as signs of the end also fit this tradition.

This leads us to the third part of the book, which draws the profile of Francesco da Montepulciano, as it emerges from contemporary documents and from those who constructed his memory. Of considerable value are the documents regarding his preaching in Assisi in the summer of 1513. They show how this friar was well integrated into his Order, with important assignments, since he preached in Assisi during the General Chapter. This episode proves that he was able to adapt his communication from the pulpit according to specific needs. His preaching in Assisi was a preaching of peace, aiming at the re-composition of a broken social fabric. The information about it is due to a notary who, rather than to the words of the sermon (which are not recorded, but no less important for that), was attentive to the staging and gestures that accompany it. He recorded the procession with which Francesco arrived in the square, the presence of the authorities, the friar's dialogue with the listeners, when he asks that they entrust directly to him 'the form and modalities of forgiveness', the exhortation to manifest consent with a gesture (taking off or keeping the cap), then forcing - thanks to the pressure of the crowd - those who were hesitant, the reading from the pulpit of the peace clauses, concluding everything with a spectacular gesture: "he took a broom purposely brought to the pulpit [...] and to frighten, as a sign of curse for those who had not wanted to take part in the aforementioned remission, he tore it to pieces with his own hands" (150-151). The broom destroyed on the pulpit is a difficult symbol to read, yet confirms how this friar used, like several of his contemporaries, a dramatic communication, in which not everything was left to the power of words. In assessing this episode, Lodone emphasises how Francesco belongs to the preachers able "of adapting to different contexts [...] and of understanding the audience's urgent and relevant issues" (159), as well as how essential it is for a correct understanding "to reconstruct the history of the cities in which he preached, the life of the audience he addressed from time to time" (160) and thus - I add here - to understand how the expectations of that context influenced not only the reception of the message, but its very creation.

Tracing the information about friar Francesco, Lodone highlights how the memory of his action - and in particular a prophecy linked to his name - played an important role in the early historiography of the Capuchins, who strived to construct a genealogy to legitimise them as the fulfilment of the previous attempts to reform the Franciscans. According to this tradition, in Assisi in 1513, Francesco da Montepulciano announced: "My beloved, it will not be long before you see saint Francis resurrected" (162). Perhaps he was thinking about his own reform work, but certainly the Capuchins saw it as an announcement of their own reform. This is not the last transformation of Francesco da Montepulciano, who - on the basis of faint biographical data - in the late sixteenth century was enrolled into the construction of a sacred genealogy of his fellow townsman Pope Marcellus II (died 1555). Francesco thus came close to canonisation in the eighteenth century. Within the documents for the canonisation process, surprisingly the "only text directly attributable to Francesco" re-emerges. It is a letter - written in August 1513 - addressed to his companions in the eremitic life, which shows how he was active in his reform projects, albeit they were so fragile that he warns the addressees not to fear, because "weakening will be a means of growth" (193).

The critical edition of the apocalyptic sermon delivered in Florence completes the book, both by offering itself to a reading that fully grasps its scope, and as a starting point for further investigations. For example, it remains to be better understood who wanted this friar to preach in Florence. The location of his sermons was among the most important, and was carefully assigned. One might wonder whether the success of his pacification action in Assisi made him welcome as a preacher in Florence, a city still torn by tensions after the end of the Republic. The mystery also remains on the reportator's identity as to why only this sermon seems to have been written by someone who arguably arrived there ready for this task.

Overall, the book is an important contribution to studies on preaching and on early Renaissance Italy. By insightfully reconstructing the profile of an apparently secondary friar, Lodone provides us with a renewed look at the society and culture of the time. The book is an exemplary work on the multiple effects that words spoken and feelings aroused (or rather, performed) in preaching had in the society of the time. Given its value, the hope is that it will soon be translated into English.