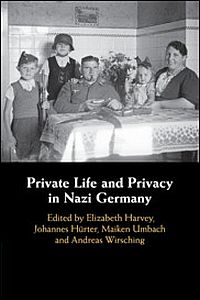 In April 2020 the Hamburg broadsheet Die Zeit published a joint interview conducted in partnership with the 'Jena Center 20th Century History' with the scholars and Zeitzeugen Theo Sommer and Saul Friedländer concerning their contrasting memories of 8 May 1945. Towards the end of the interview, the conversation went as follows:

This interesting exchange has a direct bearing on some of the key themes addressed in this new and extremely rich volume of essays on private life and privacy in the 'Third Reich'. It speaks directly and viscerally to the way in which private life in Nazi Germany has been understood since about the mid-1980s, when the French-Israeli historian Friedländer, prompted by his involvement in the Historikerstreit of that period, began work on his two-volume history of the persecution and murder of the Jews in the years 1933-1945. [2] Rights to privacy, in this view, were bestowed during the 'Third Reich' upon 'desirable' Germans, in other words the Volksgenossen and -genossinnen. But they were cruelly denied to racial and social outsiders. For Germany's Jews, this was already self-evident by November 1938 at the latest, when the violence they encountered from the regime within their own homes during the Kristallnacht pogrom meant that the private sphere had, all of a sudden, ceased to be a safe space.

Yet for the volume's editors and contributors, this observation is merely the entance point for a radical reconsideration of the private under National Socialism. It was not just a 'place of retreat' (235), conditionally open to some and completely closed to others. Rather, in the words of Janosch Steuwer, it was a site for the 'self-politicisation of [all] Germans' (54), whether in opposition to, or - with varying degrees of enthusiasm - acceptance of, the myriad social and political demands of the new state. Understanding privacy in National Socialism, in other words, requires more than mere acknowledgement of its place in the Nazi world view as a privilege which could be denied or granted to certain individuals and groups on the basis of their racial 'worth'. The concept of privacy itself needs to be historicised so that it is no longer viewed uncritically as a universal given before 1933 which the Nazi state took away, from some absolutely and from others partly (or not at all). Rather, it has to be seen as a 'relational category' (37) whose historical significance can only be grasped through simultaneous reference to the public and the political, and to what both of these spheres meant to 'ordinary' Germans living under National Socialist rule.

Paradoxically, as Mary Fulbrook and Maiken Umbach also argue in their contributions to the volume, a private space for the cultivation of one's own thoughts, emotions and fabled interiority (Innerlichkeit), however insecure or precarious, was still seen as a necessary foundation for the creation of a 'social self'. And as National Socialism depended on the latter for its very existence as a modern, plebiscitary dictatorship, logically it could not function without the former either. Both were in fact necessary for the production of what Fulbrook calls a '"bystander society" in which bonds of affection and empathy [were] severed' over time (73). 'What is remarkable about Nazi Germany', she continues, 'is the speed with which everything was transformed', including how rapidly individuals adjusted both their 'public faces' and their 'private lives' to the many new threats, dilemmas, hopes and joys that presented themselves after 1933, and again after 1939 (63). Steps towards genocide that were 'unthinkable in 1932' had become politically and morally 'possible' by 1942 (55).

The other chapters in the volume demonstrate this on various levels, from the handling of family disputes and tenancy disagreements in criminal and civil courts (Annemone Christians) to shifting, albeit 'often self-limiting', moral sentiments regarding macro-political issues (Nicholas Stargardt); changing experiences of and discourses surrounding home leave during the war (Christian Packheiser); the 'link between private and public in the institution of Feldpost' (Cornelie Usborne); 'trust' and 'wariness' between Reich German and Polish midwives and their ethnic German clients in the occupied 'Reichsgau Wartheland' after 1939 (Wiebke Lisner); and the public/private aspects of flag hoisting on days of 'national celebration' (Karl Christian Führer). Space precludes discussion of all the contributions, but the joint piece by Andrew Stuart Bergerson, Laura Fahnenbruck and Christine Hartig on the social meanings attached to the wartime exchange of personal artefacts such as love letters, photographs and scarce items of luxury food or clothing is worthy of special mention. Here they show how one newly-wed couple's very private communicative strategies for overcoming the heartache of wartime separation via romantic invocations of a brighter future in which they would live their lives 'for just the two of them' also paradoxically aided their 'public integration into the Kriegsgemeinschaft' (259-60).

The new paradigms developed in the volume, particularly Fulbrook's notion of a 'bystander society' have the potential to open up fresh lines of enquiry in the scholarship on Nazi Germany more generally. For instance, a generation ago, one of the key themes in works on women in the 'Third Reich' was the loneliness of the housewife, as the growing pressures on men and children to spend significant amounts of time outside the home left her, for better or worse, with only the disembodied voice of the radio for company [3]. Pamela E. Swett, in her chapter on 'spending and saving', also gives examples of pre-war advertising techniques that marketed products for the home as a neat way for women to keep their husbands happy and safe indoors for longer periods of time. But what if this (fear of) loneliness were reframed in terms of the rapidly evolving relationship between private disappointments and new modes of political self-mobilisation? Could German women's voluntary efforts during the war, in spheres such as social work, nursing, hospital visits to injured servicemen and air raid protection, be seen, in part, as an attempt to compensate for an emotional void inside the home? [4]

Overall, this is a fantastic volume which significantly advances the field and stimulates new ways of thinking. As Umbach pithily puts it, the question that the contributors seek - and give - answers to is 'not so much what National Socialism did to Germans, but what Germans did with National Socialism' (130). My only concern is that some of the pieces seem to be overly historist in approach. Yes, it is important to try to understand what privacy meant under National Socialism on its own terms, rather than in relation to an assumed western 'norm', but not if this ends in the blanket labelling of pre-1933 notions of the private as 'bourgeois' (and post-1945 ones as mere face-saving attempts at distancing oneself from Nazi war crimes through references to 'inner emigration'). Today the countries of the European Union have some of the strictest privacy laws in the world, and for good historical as well as political reasons. However, these rights are under threat from developments in digital surveillance and face recognition technology, buttressed by health fears sparked by the coronavirus pandemic. The 'reeducation' camps for the Uighur people in north-western China are also a stark reminder of George Orwell's continued relevance in the early twenty first century. We forget all this at our peril.