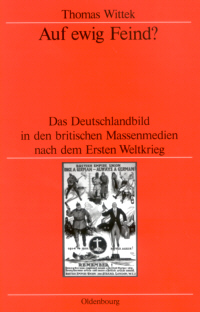 "Prussia attained its apogee when, in 1871, William, the seventh King, took the title of German Emperor. This was the crowning stroke of Bismarck's scheming diplomacy, which established the rule of Prussia over Austria, and perpetuated the peculiar Prussian type, as compared with the kindlier nature and more human features of the older Germany." (203)

These lines, published in the conservative Daily Telegraph on 11 November 1918, typify the standard critique of 'Prussian militarism' as developed in Britain during the First World War. In this view, which can also be seen in academic publications of the time, there were two Germanys, the 'old' Germany of philosophers and poets like Kant, Goethe and Schiller, and the 'new' Germany of aggressive imperialism and nationalism, personified by Heinrich von Treitschke and Friedrich von Bernhardi. [1] Any peace treaty would have to punish and keep in check this new, dangerous Germany, which had been responsible for the outbreak of war in 1914 and for atrocities committed in Belgium and elsewhere. [2]

As Thomas Wittek's new study shows, however, the British media's view of Germany was rapidly transformed in the early 1920s, so that there could be little talk of permanent enmity between the two nations. True, the Northcliffe and Rothermere press, and the Daily Mail in particular, continued to peddle wartime caricatures of 'the Hun' long after the fighting had stopped. Cinematic newsreels also played a role in perpetuating older myths and stereotypes, as reports on nationalist German students celebrating the fiftieth anniversary of the founding of the Reich in 1921, or the funeral of the ex-Kaiserin Auguste Viktoria in the same year, show (384-5). Nonetheless, liberal and left-wing newspapers broadly welcomed the new republic and saw it as the heir to more progressive political traditions in the German past - in particular the 1848 revolution with its emphasis on freedom, brotherhood and unity. Such traditions, it was argued, would also make Germany a stable bulwark against the threat of bolshevism coming from the east, a view shared by Prime Minister David Lloyd George (316).

If Versailles was seen as unduly harsh by some, French foreign policy after 1919 alienated even the more anti-German journalists, to the extent that within a few years the rulers in Paris were seen as a greater threat to European peace than their counterparts in Berlin. Or, as Wittek puts it, paraphrasing the views of George Gedye, Rhineland correspondent for the Times (and later a sharp critic of Nazism and appeasement): "Die Schwäche Deutschlands, die die französische Außenpolitik offenbart hatte, und das Hegemoniestreben Frankreichs, dessen Ausdruck die Ruhrbesetzung war, beendete [...] die britische Feindschaft gegenüber Deutschland und legte das Fundament für eine Ära der Kooperation, deren Symbol die Locarno-Verträge waren" (115).

Interesting too is Wittek's observation that the longer individual British journalists stayed in Germany, the more positive their reports became about the peaceful intentions of its new republican leaders (393). In the aftermath of the Ruhr crisis and the attempted uprisings by the Communists in Hamburg and the National Socialists in Bavaria, even conservative newspapers like the Times and the Daily Telegraph conceded that Germany's internal problems were caused at least in part by the foreign policy of the Allies, and noted that the maintenance of a stable democracy was in Britain's national interest (331). Only the Daily Mail reporter George Ward Price sympathised with the French notion of an independent Rhineland and interpreted the crushing of a pro-separatist demonstration in Düsseldorf in September 1923 as an act of nationalistic aggression, although significantly he did not spend long periods of time in Germany and tended to travel widely across the continent and further afield (125).

Perhaps the real proof of a change in British attitudes came with the election of Field Marshal Paul von Hindenburg as Reich President in April 1925. While all newspapers expressed concerns about Hindenburg's nomination as a candidate, as soon as the outcome of the election was known a consensus developed that the result did not necessarily spell disaster for the future of German democracy or Anglo-German relations. Indeed, later that year Hindenburg was even praised for his behind-the-scenes role in persuading nationalist members of the Reichstag to support the new Locarno treaties, thus heralding a new era in international relations (338-9).

Alongside a focus on newspaper content and the work of journalists on the ground, Wittek also explores the relationship between mass communications and political decision-making at the highest levels. Particularly interesting here is his research into the network of personal connections between politicians and newspaper editors which helped to shape elite opinion in the years 1918 to 1925. Three examples in particular are chosen: Lord Burnham (Harry Webster Levy-Lawson), proprietor of the Daily Telegraph from 1903 to 1927, who had the ear of both Asquith and Lloyd George; C. P. Scott, editor of the Manchester Guardian from 1872 to 1929, who again was close to Lloyd George, even after the latter left office in 1922; and Geoffrey Dawson, editor of the Times from 1912 to 1919 and 1923 to 1941, who cultivated links to Lloyd George's Conservative successors, Andrew Bonar Law and Stanley Baldwin. Burnham, it should be noted, had been a Liberal MP in the 1880s and 1890s, and later a Conservative MP from 1905 to 1916, while Scott likewise served as a Liberal MP from 1895 to 1906. Dawson was also a former member of Lord Milner's 'Kindergarten'. All three therefore had backgrounds in parliament as well as journalism, making them well placed to act as bridges between the two worlds of politics and the media.

One criticism I do have, however, is that Wittek is a little overschematic in his division of British press attitudes between an anti-German right and a more pro-German/pacifist left. For instance, it was not only socialists and left-liberal outsiders who called for a negotiated peace during the war (97), but also 'pragmatic' figures from within the establishment like the Conservative statesman and former Foreign Secretary Lord Lansdowne. [3] Conversely, in 1918/19 a significant body of opinion in Britain, stretching well into liberal and socialist circles, concluded that German 'war criminals' would have to be punished to deter future aggressors and strengthen the new democratic world order. To quote John Horne and Alan Kramer, "this was a popular cause which had no need of being invented by politicians". [4] Nor was it the work solely of the Northcliffe press, as Wittek seems to imply (215-27).

Apart from this, however, the book is a fine piece of scholarship with much to recommend it from both the historical and the political science angle. Anyone keen to know more about the history of modern communications should certainly add it to their reading list; the same goes for those interested in the twists and turns of international relations in the first half of the 1920s and beyond.

[3] Lansdowne famously wrote a letter advocating a compromise peace in late 1917, which was refused by Geoffrey Dawson at the Times but published with the agreement of Lord Burnham in the Daily Telegraph on 29 November 1917. See Richard Wilkinson: Lord Lansdowne and British Foreign Policy, 1900-1917, in: History Review 36 (2000), 9-14.