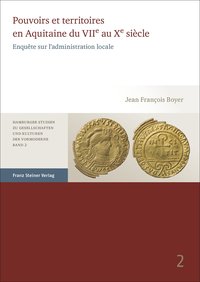 The history of early medieval Aquitaine is due for an upgrade. Taken as a whole, the region in the South-West of present-day France has been the subject of an increasing number of studies over the past decades. Nevertheless, the main works that aim to give an overview of the area over several centuries - such as the venerable posthumous book by Léonce Auzias, L'Aquitaine carolingienne (778-987) (1937) or Michel Rouche's L'Aquitaine des Wisigoths aux Arabes (1979) - unfortunately are no longer up to par with the current modes of studying medieval history. This is to a large extent due to the simple observation that it is all but impossible to narrow down what "Aquitaine" and the "Aquitanians" are supposed to be from their first appearance in the written record - Caesar's De Bello Gallico - to the appearance of a self-assured Duchy in the twelfth century, shaped by confident leaders such as, most famously, Eleanor of Aquitaine. Attempts to write the history of this region inevitably fall prey to the multiple identities and complex developments that form the foundations of the present idea of Aquitaine - an idea that may be found in snapshots of the early history of the area, but is hardly consistent over the centuries.

Instead of this search for a grand narrative, the current crop of scholarship tends to focus on smaller, more achievable goals, such as re-assessing urban identities and monastic cultures, mining the rich archaeological potential of the region, or retracing the manuscript tradition of the most prevalent historiographical sources from and about Aquitaine. These studies are invaluable for the way they actually show the dynamics of the region rather than treating the duchy-to-be teleologically, as an identity in search of itself. And then there are works like the title under review, which admirably manages bridge the gap between minute observations and broad developments. As a result, Boyer's Pouvoirs et Territoires en Aquitaine will hopefully serve as a benchmark study for a subsequent series of studies into this fascinating region.

This (for a review) lengthy introduction should partially hide the fact that it is impossible to do this book justice within the limits of the genre. Standing at a whopping 967 pages, this book demonstrates Boyer's comprehensive yet careful interpretation of the available material. The book includes over 400 pages of appendices, painstakingly listing the archaeological, prosopographical and literary evidence upon which the argument is built. Coupled with an impressive bibliography and over 100 images, the sheer encyclopaedic value of this book is already worth the price of admission. An added advantage of this use of appendices is that the argument itself, while still 500 pages of academic French prose, remains as focused as it can without being weighted down by listing the evidence at every turn.

Boyer's main thesis, as it stands, is important even if it may not be surprising. His book revolves around the idea that Aquitaine consisted of many 'microsociétés' which were tied to a larger administrative apparatus through a system of vicarii: powerbrokers between the counts and the local populace, whose privileged position in society gradually became institutionalised over the centuries. These vicarii, in turn, appear to be an innovation in the region following the Carolingian takeover in the latter half of the eighth century. The localities they represented, however, were based in older administrative divisions reaching back to the Merovingian and sometimes even the Roman era. This combination of longevity and power led to an increased institutionalisation that, paradoxically, ended up becoming a force working against local change in the long run, as much as it allowed for local interests (esp. that of Limoges) to flourish in the aftermath of the Carolingian takeover.

The true innovation in this monograph lies not within this overarching narrative, fascinating and insightful though it may be. In actuality, what sets this study apart is the long opening chapter (17-199) in which the premise of the book is explained and 'une source exceptionelle' is introduced: the trientes. These are gold coins that continue to be minted well beyond their heyday in the Merovingian era, and, as Boyer convincingly argues, were probably converted from a method of payment into a vessel for tax collection. Tracing their spread, minting locations, and usage over time is what allows the author to reconfigure the map of Aquitaine in a number of flashpoints where local - though not necessarily royal - power was exercised. These were vicarial power bases, and those are the places on which one must concentrate in order to gauge the development of Aquitaine and its administration.

Boyer has succeeded admirably in doing exactly that. From his methodological introduction, to a (much-needed) overview of the history of Aquitaine from the 7th to the 10th centuries (200-294), to a reconstruction of the early medieval divisions visible within the duchy based on his methods (295-487), Pouvoirs et Territoires ends up filling an important gap in our understanding of how Aquitaine grew into the famous high medieval duchy - a process the author, in his final sentence, compares to becoming a butterfly. The result is a book that, standing on its own, may not shift any paradigms, but which will hopefully serve as a starting point and an inspiration to the many scholars who have been eagerly awaiting a book of this scope and magnitude. It is thus an essential first step towards a re-interpretation of the history of Aquitaine. The impressive size of the volume should not be a deterrent. Rather, this reviewer sees it as an indication of how many more steps are still needed before the history of Aquitaine will have been fully brought into the 21st century.