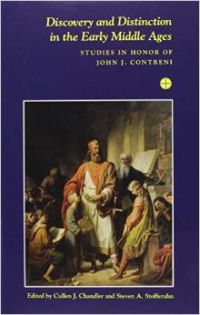 The title of this Festschrift has been aptly chosen. Its recipient, John J. Contreni, can look back on a distinguished career during which he has contributed many valuable discoveries to the field of early medieval studies. Moreover, his work here is honoured by a remarkable line-up of scholars - friends and colleagues, mentors and students - each of whom shows that there remains much to explore in the early Middle Ages, especially when it comes to the hearts and minds of the people we encounter in the extant sources. In that sense, this volume, which started out in 2008 as a series of presentations at the International Congress on Medieval Studies in Kalamazoo, certainly is a fitting tribute to a scholar whose legacy in the field is still palpable - and an interesting and stimulating read in its own right as well.

Following the preface (vii-x) and a select bibliography (xv-xxii) of the works of Contreni, the volume itself has been divided into four parts, each containing four relatively short articles. The first part, called "Authors and Audiences" (1-70), starts with a contribution by Rosamond McKitterick on the ways in which early medieval intellectuals could and would read Roman histories (3-21). Starting from the manuscript transmission of the Chronicon of Eusebius, who stands between Roman and Christian, antique and medieval traditions, McKitterick briefly treats such phenomena as glosses, continuations and quotations before convincingly arguing in a more in-depth manner that structure and form should also be taken into account. Her article is followed by David Ganz's edition and concise commentary of two hitherto unedited Carolingian letters (22-30), one of which is from the very Laon collection studied by Contreni - a reminder that discoveries still lie within the manuscripts themselves as much as in the reinterpretations of the texts they are known to contain. Eric Goldberg's fascinating study of the implications of the Carolingian debates about hunting is next (31-56). In the course of several neglected hunting treatises - one of which has been translated in an appendix - he shows how the significance of hunting for a courtly society also boiled over into intellectual debates about everything from dietary restrictions to creation itself. The section finishes with Marcia Colish' reassessment of the authorship of a twelfth-century theological work known as the Summa Sententiarum (57-70). Starting from an earlier proposal that this may have been Otto of Lucca, her careful analysis of the internal evidence in the text shows that it is more likely that he hailed from a more Gallican, northern tradition - even though this does not get us closer to identifying the real author (a pursuit that may be futile to begin with).

The next section is titled "Schools and Scholars" (71-164), and starts with Martin Claussen's characterisation of Benedict of Aniane as a teacher of monastic culture (73-87), using the medium of his Concordia Regularum not to enforce the introduction of the Regula Benedicti, but rather to demonstrate its universal appeal through "consultation, discussion, and conference". Johannes Heil then discusses the fascinating possibility that intellectuals such as Theodulf or Haimo of Auxerre may have been influenced by Jewish as well as by Patristic traditions (88-115). This line of research still is at a starting point, with much vital information remaining in the dark, but Heil does an admirable job showing the many avenues of research open to those intent on continuing Contreni's work. Similarly eye-opening is Wesley Stevens' delightfully polemical treatment of (early) modern dictionaries of medieval and classical Latin (116-148), in which he uses exemplary lemmata from the field of 'science' to show how earlier lexicographers have skewed subsequent debates by their choices for in- or exclusion, or the sometimes less-than-useful translations offered in dictionaries that many students (this reviewer included) would consider to be classics. The last article is by Steven Stofferahn, who presents a study of the impact of Lothar's 825 Capitulare Olonnense ecclesiasticum primum (149-163), an attempt by the heir of Louis the Pious to influence political life in Italy by reforming its educational system. The connections between these two show that Lothar was doing more than mere renovatio: this capitulary is a prime example of the ways in which ninth-century politics and education were rarely, if ever, separate.

Part 3 of this book is called "Context and Connections" (165-232). It starts with Lawrence Nees' reinterpretation of Theodulf's mosaic in the church of Germigny (167-186). Nees takes the reader on a tour of earlier scholarship on Theodulf's art-historical programme, as well as Old Testament motifs in the early medieval world, arguing that this mosaic shows a more explicit connection with Rome and the image of Jerusalem cultivated there than had hitherto been suspected. Cullen Chandler is next, offering a rereading of mss. Ripoll 106, which contains a réécriture of the apocryphal Gospel of Nicodemus tailored to its local context (187-204). Retitled Gesta graecorum de passione Domini contra Iudaeos in this manuscript, Chandler shows how it should be seen not merely as part of early medieval anti-Semitic sentiments, but also as an educational tractate on resurrection, redemption and conversion that makes sense in a world where Jews and Christians interacted intensively. Thomas Noble then takes us to Rome and gives us a brief, but no less interesting, overview of what little information we have on the way the many different visitors to Rome would have been received (205-217). Running the gamut of pilgrims, traders, dignitaries, etc., he rightly concludes that this lack of data should not be taken to mean that what we do know all fits into the same mould. The last author in this section is Pierre Riché, who honours his pupil with his thoughts (in French) on why the eleventh century could be seen as marking a watershed between the early and late Middle Ages (218-232). All reservations against periodization aside, Riché does an admirable job presenting an overview of the many social, intellectual and religious changes that took place in that period, while also demonstrating how lingering continuities from the Carolingian era influenced these changes.

The final section, "Visions and Voices" (233-306), begins with Giselle de Nie's anthropological, almost psychological approach to early Christian miracle stories (235-251). A thought-provoking explanation of four miracles as retold by Ambrose, Augustine, Paul of Aquileia, and an anonymous cleric, De Nie identifies four "patterns" that each provide a model for later hagiographers, explaining the role of miracles as an expression of the relation between the divine truth and the human experience. Amy Bosworth also looks for patterns, but within one single source text, the Miracula Sancti Germani (252-272). Her sober yet valuable contribution discusses and reassesses the intended structure of this text based on the considerable differences between the chapter headings in its ninth-century manuscript and those in the most widely used edition in the Patrologia Latina. The appendix makes visible these differences, and counts as yet another plea to treat the editions at our disposal as critically as their manuscripts. Rounding out this part are two intriguing articles by Paul Dutton (273-287) and Janet Nelson (288-306), each of whom delves deeper into the hearts and minds of two well-known Carolingian auteurs. Dutton begins from the question "Why did Eriugena write?", and, rather than provide a ready answer, proceeds to explain why this is such a fascinating question. His musings about the relation between oral, written and graphic modes of communication are followed by Nelson's ideas about the libera vox of Theodulf. Her argument, engaging as always, traces "a line of reforming continuity" in the works of the bishop, which is tied in to broader observations about Carolingian court culture, where the meeting of old and new ideals and the tension between competition and cooperation shaped Theodulf's understanding of his own position as a role-model and counsellor to the empire.

The articles in this volume are not easy, nor are they meant to be. Their brevity allowed the editors to present a succinct overview of the many trains of thought that Contreni set in motion, but it has led to articles that require readers to have a solid grounding in early medieval history, or invite them to work their way through the endnotes that follow each article. The four sections provide some organisational structure, but due to the common themes addressed between some contributions across different sections, this book could as easily be read as a coherent whole, although the articles themselves do not always make this explicit. This may make reading some individual contributions a bit daunting at times, but the experience is ultimately rewarding. The contributors have not taken the easy way out, but have focused on providing new ideas, new discoveries, and new avenues to research to the audience.

The cover image, a romantic painting of Charlemagne reprimanding his students (based on the famous anecdote from Notker's Gesta Karoli), is both well-chosen and somewhat inappropriate. On the one hand, it perfectly illustrates the will to excel in scholarly endeavours, which characterised both the Carolingian court and the articles gathered in this volume. On the other hand, neither Charlemagne nor the reader of these studies would find any reason to reprimand anyone who has contributed to this highly interesting book.