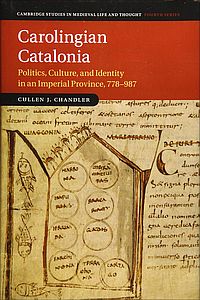 Chandler opens the conclusion to his book with the bold statement that "Catalonia was a Carolingian invention", before asserting that "...earlier scholars, perhaps inadvertently, gave the region undue attention as the principality that it later became..." (264). Between them, these two phrases sum up this book, an overview of the history of Catalonia from the late eighth to the late tenth century. It does an admirable job steering a course between debates about the nature of regional identities, and questions about the extent to which scholarship of the nineteenth and the twentieth centuries needs to be cast in a different light. Chandler's book provides a well-researched, accessible and timely addition to these issues, making it an essential text for students of the history of the Iberian peninsula, and a highly recommended one for those interested in the formation of identities and the role played by historiography in that process.

Chandler adds to the growing English-language corpus on medieval Iberia by putting Catalonian identity front and center. How would the people in that contested region have conceived of themselves, and why. In the process, he shows the value of treating this seemingly peripheral area as central to the identities and communities visible through the extant sources, rather than placing all socio-political developments in the shadow of its Carolingian neighbor to the north, as has all too often been the case. Ironically, one of Chandler's main conclusions is that many political developments actually were due to Carolingian influence. However, his approach to "identity" allows him to see this not as the result of an imagined opposition between Frankish/Carolingian and local Catalonian interests, but a consequence of the cultural and political influence of the empire in the region. The long history of Catalonia does not have its roots in resistance to invaders, but rather in the way local power brokers dealt with said incursions and harnessed the Carolingian drive to create an empire to their own advantage.

Chandler lays bare the complexities of life on the imperial frontier in six chronologically arranged chapters, bookended by a methodological introduction (1-23) and a concise conclusion (264-273). The first, Gothic Catalonia and Septimania to 778 (24-59) lays the groundwork by setting up a polity that straddled the Pyrenees, reaping the benefits and the disadvantages of both Frankish and Visigothic influence, with Frankish influence becoming more palpable as the Visigothic kingdoms fell to the Umayyads just as the Carolingians started flexing their muscles. Then, the story shifts to the Carolingians and the way their influence was instrumental in Creating the Spanish March, 778ſ840 (60-110). Chandler reframes existing narratives and focuses on the way incorporation of local aristocracies and the acceptance of a central government played a role in the stabilization of the realm. The Catalonian aristocrats needed a ruler powerful enough to arbitrate when necessary, but distant enough to be safely ignored when needed. The Carolingians needed a secure border, and were not averse to sponsoring the members of the elite they thought would be loyal to them - or replacing them outright. This pattern continues in March and Monarchy, 840-878 (111-150), where the observation is made that the "Franks" sent to the South were more inclined to rebel against the Carolingians than the "Catalonians" or "Goths" were. The turmoil at the Carolingian court created opportunities for ambitious members of the dynasty, while defense of the status quo served the purposes of the more localized nobility. Counts, Church, and Kings, 877-947 (151-188) shows that this pattern allowed local aristocrats to consolidate their position as the power of the Carolingian dynasty waned in the course of the tenth century. Then follows a brief interlude on Learned Culture in Carolingian Catalonia (189-228), in which Chandler shows that the integration and incorporation into the Carolingian cultural sphere had gone hand in hand with a lively and mutual exchange of liturgical, intellectual, and other interests. Finally, in the chapter appropriately titled The March towards Sovereignty? (947-988) (229-263), it is argued that the formation of a Catalonian identity may have been as much a consequence of the disappearance of the Carolingian presence to the North, as of the supposed independent streak running through the people in the region. Catalonia was founded on a Carolingian base, but, over the centuries, the aristocracy had crafted methods to continue on their own as well.

Carolingian Catalonia is elegantly written, and aims for as broad an audience as possible. The chapters are structured to function independently, with clear introductions and conclusions that allow readers to easily navigate the narrative. The choice to maintain a chronological overview, however, at times leads to passages where many names, dates and events follow each other in quick succession, which may be a bit daunting for readers unfamiliar with the region. Nevertheless, this is unavoidable given what the book set out to do, which is to provide an introduction to the history of Catalonia. If Chandler's narrative comes off as daunting, it should be seen as a sign that this book is a jumping-off point for further study of the region: this reviewer could see it as the cornerstone of many a student paper or subsequent study.

One issue that is inadvertently highlighted by this book is the tension between "collective" identity, community formation, and the perspective of the sources - many of which are the products of singular minds and specific contexts. Although Chandler navigates these treacherous waters carefully, he does occasionally fall into the trap of assigning agency to a collective where there need not necessarily be one outside the sources. Most notably, this emerges with the occasional conflation of "ethnic" and "dynastic" labels: the fact that the Carolingians were Frankish does not mean that all Franks would have identified as being party to the Carolingian in-group, for instance. We are, in this book, dealing with a very specific and highly elite discourse, and the question remains to what extent the "march towards sovereignty" was a reflection of an existing ethnic presence. That said, the author treats the problems arising from studying early medieval ethnicity and identity with exemplary care throughout.

In fact, a highlight of the book arises from this tension. The chapters are interspersed with critical sidelines to earlier scholarship. After all, Catalonian identity may not be as firmly rooted in the early middle ages as historians of a nationalistic bent want us to believe, but that does not mean these same national historians have not made their mark on the study of Catalonia, through the editions they produced, their focus on language, and their willingness to seek an identity even if none could be discerned. Chandler shows himself a critical reader of both contemporary sources and modern scholarship. It is this engagement with all the material - not just the traditional "primary sources" - that elevates this book, and makes it a great read for everybody with an interest in the early medieval period and its perceived importance for the identities (and myths!) of modern nations.