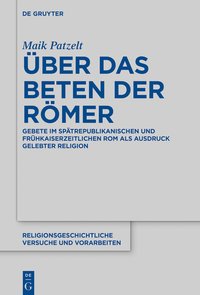 This book contains an important proposition that students of Roman religion should take seriously: praying is a central tenet of Roman religious practice and discourse, whose significance considerably exceeds the remit of prayers. It goes on to encompass a whole set of activities, opportunities, and constraints, and takes us right to the core of the role that the body plays in political and social interactions. The account of Roman praying that emerges from this work is nothing short of transformative. We are presented with (or indeed awakened to) a ubiquitous, diverse, creative, traditional, contested and controversial practice, which straddles across public and private, high and low, elite and marginal, and in which deference and devotion, commitment and scepticism, discretion and enthusiasm, blend with one another inextricably. What is likely to strike most readers is the set of connections that are proposed here. Finding between the same covers a discussion of the Ciceronian construction of Clodius' furor and a treatment of salutationes, along with the tradition on Scipio and Jupiter and the supplicationes of 217, ending with a provocative reading of Livy's account of the deuotio of P. Decius Mus, makes for a refreshing experience. Patzelt shows that issues that we have long been trained to study as neatly and unproblematically separate dossiers can plausibly be read as portions of the same story. They may be plotted as instances of an attempt to construct an attempt of writing the history of the engagement with the divine, in which the performance of codified ritual is less important that the construction of rituals through their performance - Patzelt speaks of a shift from Ritual to Ritualisierung (26-38). The backdrop is the Erfurt-based Lived Ancient Religion project, which has sought to bring out the thickness and significance of the individual dimension in ancient religious practice. Patzelt has taken an important step towards bringing out the complexity and value of this undertaking, and in doing so he has not shied away from the discussion of difficult pieces of evidence.

This book has an important message, rather than a cohesive argument. It may be summarised as follows: if we are serious about parting company from the idea of Roman religion as a set of essentially formulaic practices, in which there is hardly any scope for innovation and personal involvement is a moot point, then we should be prepared to consider the consequences of the full emotional involvement of their participants and explore it in all its creativity and diversity. Patzelt articulates his case elegantly and with apparent commitment to his subject matter; he writes effectively and economically. He casts his net widely and pursues his underlying periodisation - from late Republic to early Empire - with a considerable degree of freedom. In fact, it is hard to come across an Ancient History book that contains such few dates. Patzelt's interest lies in patterns that cut across a wide chronological range, and in working principles that can be applied broadly. He is acutely aware of the importance and desirability of thinking through case-studies; yet he leaves a real need for testing his canvas of hypotheses against a more tightly controlled chronological framework. For instance, I am sure there is a good paper to be written on praying in second-century BCE Rome and the ways in which engagement with divine images changed in that period. This book sets the scene for it and for other comparable undertakings, but almost casually, and without probing what specific periods might have to offer to the understanding of a specific problem.

Patzelt takes good care in summarising his interim conclusions at the end of each chapter, and his final summary is serviceable. Yet the overall structure of the book does not quite come to terms with the need for effective sign-posting and, perhaps even more importantly, with the importance of coming to terms with just how unfamiliar much of what is being proposed here will be to readers. It is not surprising that Patzelt has already been able to put forward a number of key arguments from his book in a series of recent or forthcoming papers (in English) that are obviously relevant to the subject matter of the thesis: this book is largely about the cumulative juxtaposition of major problems and their testing out against an overarching working hypothesis.

Some specific aspects of the discussion leave scope for a supplement of debate. The perceptive chapter on prayers and on the interplay between written and oral dimension upon which they are predicated would have greatly benefited from some engagement with Duncan MacRae's work on legible religion in Rome, which admittedly appeared when Patzelt's project was already well underway. His contention that the deuotio is largely a Livian construction is likely to be one of the most controversial aspects of the discussion. It would be interesting to see what Patzelt makes of the study of Alison Rosenblitt, who read Aurelius Cotta's speech in Sallust's histories (AJP 132, 2011) as a reflection on the rhetoric of deuotio; a case study that would also further probe Patzelt's apt emphasis on the performative dimension of any form of religious engagement, and on the rhetorical dimension of praying. Patzelt insists recurrently on the ecstatic dimension of prayer: in this respect he is strongly indebted to important work in religious anthropology, notably C. Humphrey and J. Laidlaw (see esp. 37-38). Yet it is safe to assume that there are different degrees of ecstasy one can attain or be seen to attain; moreover, praying does also have an important routinisation component. Patzelt is well aware of this issue and of the performative dimension of praying, but is rather more interested in 'Besessenheit' (cf. esp. ch. 9).

What we lose in terms of diachronic nuance and cohesiveness of the argument is amply made up by the creativity of the discussion, by the boldness with which it proposes to rethink the parameters of the debate, and the gusto with which it puts forward new attempts to link up problems that have so far been looked at in secure isolation from one another. I reckon this is a trade-off that most readers will be willing to accept. This book significantly expands the boundaries of our knowledge, and forcefully reframes the terms of a problem that has long been underestimated, and has now emerged in all its importance and urgency. Roman praying is now firmly on the map, and we are very much in Patzelt's debt for that.