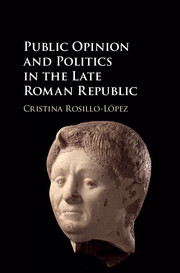 Over the last two decades our knowledge of the Roman plebs and its culture has arguably become deeper than ever before, and this significant progress belongs in a wider shift that has led scholars to engage with the full set of experience and conflicts that ancient Rome has to offer, as a place replete with shops, street corner shrines, libraries, germs, and much else. In this wide-ranging book Cristina Rosillo-López reminds us that Republican Rome was also a place full of words, and that most of those words carried strong political meanings and intentions, forming a web of information and controversy that was laid out across an alert, receptive, and suitably dysfunctional set of audiences. In taking this view, she proposes a welcome corrective to a number of readings, old and recent, that have identified the outlook of the elite (however defined) as the defining criterion of public opinion, and takes a broader and, in her own words, 'flexible' (3) approach, proposing to see public opinion at work whenever and wherever views on matters of political and social relevance are being discussed. She has only a relative interest in definitions, and is much more keenly focused on bringing out the significance of a wide body of material that could benefit from a general discussion like the one she proposes. Shane Butler's The Hand of Cicero is probably the closest prequel and the most helpful companion to this study, which however parts company with it in a less marked focus on the written word and conversely stronger interest in the spoken dimension, as well as in a less heavily theoretical bent. That is not to say that this book is uninformed about the main trends of thinking on public opinion, from Michel de Montaigne to Judith Lazar (see esp. 16-27), but it is fair to note that they serve more as a helpful framework than as a body of work that seriously informs the discussion.

Rosillo-López knows her evidence and effectively brings it into her discussion (a quality that makes the lack of an index locorum all the more regrettable). The first chapter, on notions like existimatio, fama, and iudicium helpfully brings into focus some Ciceronian texts, and gives due recognition to one of Cicero's most interesting correspondents, M. Caelius. The section on the (mostly frustrated) attempts to repress and curtail the expression of dissent is very useful; the Sullan lex Cornelia de iniuriis is rightly brought out as an important point of discontinuity, and the difficult evidence that records it would have warranted a more analytical treatment (32-33). This is not the only topic on which Rosillo-López points to further avenues of inquiry, and that is likely to be one of the greatest rewards of this volume in the long term. The chapter on 'sociability and politics' is especially effective, in its emphasis on the role that many 'occasions of sociability' played in the political interaction across the city, and enabled overlaps between elite and non-elite milieus; recent work on the 'spatial turn' in Roman history receives some discussion (Rosillo-López has been able to cite Amy Russell's important book on the politics of space in Republican Rome, but has not been in a position to use it extensively; T. P. Wiseman's The Roman Audience must have also appeared too late to be taken into account). The most significant sections are those on under-exploited sources for the restrictions to movement in the Forum (53-54), where Rosillo-López helpfully stretches her late Republican periodisation and encompasses incidents from the 140s BC and from the Flavian period. The discussion of neighbourhoods, compita, pagi, and vici, is informative, but the role of the latter category could have received a more focused treatment: the place that vici had in the Gracchan period, according to H. Flower's persuasive argument, and in the aftermath of Sulla's march of 88 BC (App. BC 1.59), would have warranted some attention. The chapter on rumours and their political impact is especially rewarding, because of the amount of material it presents and discusses within the confines of a single discussion. I was left wondering, though, what sort of picture we would have had if Rosillo-López had gone for a bottom-up discussion, rather than a top-down one: if she had started her exploration from the rumours that take shape beyond the elite (touched upon at 83-84), rather than the other way round. The role of the army of a vector of politically impactful rumours has been somewhat underplayed (esp. the reaction of Lucullus' soldiers to reports of the rewards obtained by those of Pompey: Plut. Luc. 34.4-5) in a discussion where armies as a focus of public opinion have not received a great deal of scrutiny. That reluctance to engage with this theme is also apparent in the section on the aftermath of the Ides of March (187-95), where the Liberators' eventual failure is explained with their inability to read public opinion. Caesar's veterans and Lepidus' soldiers only get a fleeting mention (194).

In places Rosillo-López seems to be driven by pedagogical ambitions (see 119), and her account has a terse didactic (even taxonomic) tone that will make it valuable reading for the student of the political culture of the late Republic. The overview of the genres of 'political literature' is especially useful, and bringing back an author like Lucilius into a mainstream understanding of the politics of his time is not one of its slightest merits. Again, some will want to take an even more comprehensive approach and try to elicit the political dimension of any form of literature that is produced at a particular time. They may also be sceptical of attempts to draw general principles about the attitude of 'the Romans' to a particular genre (cf. 143, on autobiography).

The last two sections of this book discuss the role of groups and agents in the political arena, and the role of rhetoric in the making of public opinion. Her attempt to apply Noelle-Neumann's 'spiral of silence' model, reflecting on the impact of fear of isolation in bringing about silence and conformism, is well articulated and thought-provoking in equal measure, and it would be worth developing further against the background of the fear induced by a long season of political violence and civil strife. The fact that in the third quarter of the first century BC a political regime comes to a traumatic end receives very little discussion in this book. - The final chapter on rhetoric and public opinion could well be the subject of a whole monograph, and indeed several books have been devoted to that very topic. The core of the chapter is a study of the political context of three speeches of Cicero, the Verrines, the pro Cluentio, and the pro Rabirio Postumo, with a strong emphasis on the interactions with the audience and the wider political opinion: a valuable case-study.

In the conclusion Rosillo-López explores the changing role of the public opinion in the much more tightly controlled political climate of the early Principate. In doing so, she brings out the distinctive features of the problem during the late Republican period, while identifying some moments of continuity. Her case that informal interaction is an important part of Roman Republican politics is sound and well presented, though surely less innovative than some aspects of the discussion seem to maintain. What changed were the mechanisms of control of the spread of public opinion at elite levels (231-33). In using a notion like 'public opinion' there is, of course, the risk of flattening a complex field of evidence and problems into a unidimensional account or model: as Rosillo-López herself concedes, the term 'does not differentiate between elite and the plebs and does not neglect any view whatsoever' (27). It is hard not to sympathise with such an aspiration to comprehensiveness, and Rosillo-López has fulfilled that oecumenical brief as well as could conceivably be expected. Now there is scope for new attempts to argue that some views mattered, and matter, more than others - and they are likely to be better informed and more insightful thanks to Rosillo-López's book.