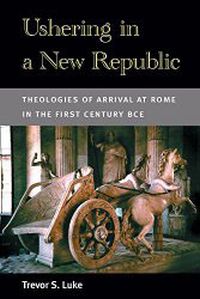 In his Antiquities Varro famously argued that there are three kinds of theology: one that belongs to the domain of myth and is the concern of poets (genus mythicon), one that pertains to the observation of nature and the study of philosophy (physicon), and one that is situated in the civic sphere (ciuile; ARD F 7-9 Cardauns). It was not an altogether new idea, but it was due to meet a lively reception: we know about Varro's take on it thanks to the highly hostile account conveyed by Augustine (De civ. D. 6.5). In this thoughtful and rewarding monograph Trevor Luke implicitly, but forcefully proposes to puncture the familiar construction of civic theology in late Republican Rome by exploring the impact that the 'personal political theologies' (13) developed by several leading figures in the first century BC had on the Roman religious and political discourse.

Like Varro's tripartite theology, this is not an altogether new idea either: Clara Gallini (a pupil of Ernesto De Martino with a strong Classics background) sketched it in a provocative monograph in 1970 (surprisingly absent from Luke's impressive and suitably multilingual bibliography) and others have explored it since, with varying degrees of success. [1] What makes Luke's approach innovative is his contention that such 'theological' projects were mainly constructed and conveyed through moments of arrival to Rome: they had the city at their centre, and were developed through movements towards and through it, which in turn entailed creative engagements with the past and, crucially, the future of Rome herself. Republican historians are all too used to talking about marches on Rome: the new focus that Luke proposes is refreshing, and is likely to prove one of the main rewards of this book.

Luke considers a cluster of fairly familiar material, and the periodization he suggests is firmly mainstream: roughly speaking, from the Social War to Augustus' funeral. Within this periodization, though, his arguments yield significant corrections to the master narratives: Sulla is a major reformer, who had a bold vision of divinely endorsed leadership bringing together the whole empire; Pompey is a counter-intuitively lucid innovator, who redefines the balance between Rome and Italy and the relationship between elites and non-elites in new ways; Caesar is a far less skilful political operator and coherent thinker than Stefan Weinstock had envisaged; Augustus is strongly indebted to Sulla's model, and acutely preoccupied, on the one hand, with defining his divine status, and on the other, with asserting productive relationships with Romulus and Numa. Whether all the ground covered by Luke should fall under the rubric of theology remains a matter for debate. We are certainly looking at very different material from what Arnaldo Momigliano explored in his discussion of the 'theological efforts' of the late Republican elite; [2] Cicero's De natura deorum, for instance, is left out of account. The notion of 'personal religious claims' that Luke proposes on one occasion (26) seems more productive to me; on the other hand, the somewhat loose usage of the notion of 'theology' has the merit of restating that we should take such claims as serious and fully committed intellectual operations, without losing sight of their political significance.

Luke builds his case through a detailed discussion of several case studies, and his selection strikes me as broadly convincing. The connections he proposes, however, are not unfailingly persuasive. The view that Sulla was a more thoughtful and radical innovator than has often been argued carries, in my view, much weight; so does the attempt to resort to Carl Schmitt's (and Giorgio Agamben's) 'state of exception' model (15). Alexander Thein's invitation to look at the weaknesses in Sulla's power, however, would have required some discussion. [3]

Much of Luke's argument on Sulla's engagement with the Etruscan lore on saecula is based on shrewd conjecture. There is no direct evidence for Sulla's interest in haruspicy, except for the interaction with Postumius, the haruspex who followed him on campaign; there was also, as Luke notes, a Roman doctrine on ages, which followed different lines to those sketched in the Etruscan lore. The view that he blended (or interchangeably used) these two traditions seems to me unlikely. [4] I also struggle to see any power mystique connotation in Scipio Aemilianus' tapping of the shoulder of Marius in Plut. Mar. 3.3 or in Valeria's seductively playful plucking of Sulla's toga (Sull. 35.4-5).

Marius' political ability receives stern criticism, perhaps deservedly: his realisation that wearing triumphal robe in the Senate had been a faux pas (Plut. Mar. 12.5), however, receives no acknowledgment (38). The links between the Laverna prodigy of 91 BC, the haruspical declaration of a new age in 88, and Vegoia's prophecy (44-45) seems tenuous. The view of that the lex Aurelia on jury reform did not have a central role in the plans of Pompey at the beginning of his consulship remains more convincing than the contention that Pompey concealed his intentions until the census was underway (66 n. 36). There is no evidence that the juries of the reformed courts included substantial numbers of Italians. More generally, some room should be allowed for the independent agency of the censors of 70 BC: although Pompey played a major role in the event, that was not 'his' census (76). Much of the political atmosphere of the period remain elusive, and I am not sure we can draw safe conclusions on the loyalty to Sulla's legacy among the senatorial elite or about the alleged 'anxiety regarding the possible end of the city' (86). The haruspical prophecy of 65 did envisage the end of the city and her empire, if we are to believe Cicero's summary of it (Cat. 3.19), but also outlined the concrete possibility of averting disaster by taking appropriate ritual action (cf. 89).

Like Marius, Caesar receives stern criticism for some of his political choices: the triumphs of 46 and 45 are regarded as serious 'errors of judgment' (121). With hindsight, they certainly were, but one is left wondering whether they would have come to be seen under a very different light had Caesar managed to develop his plans for sole rulership somewhat further. Luke may be right in arguing that there was not a 'specific, assumed definition of the word rex' in late Republican Rome (120); that does not rule out that Caesar may have had a fairly clear notion of what regal power amounted to, and that the very word 'rex' - partly because of its loosely defined meaning, and its many potential associations - was widely regarded with concern in Rome. It is doubtful that we can glean much about the mood of the Roman people from the Lupercalia incident, and a different interpretation of the Sibylline prophecy that circulated on Caesar's kingship may be put forward: the involvement of a member of the quindecemviral college (a religious expert, not just a 'besotted' admirer of Caesar: cf. 136) suggests that there were plans to bring the matter into the public domain. Luke's proposal to view the ovatio of January 44 as part of Caesar's attempt to react to Cicero' pro Marcello is an attempt to explore the intellectual conversation between the two men from a new angle: especially since the classic article by Jerzy Linderski, we have been all too keen to pursue Cicero's interest in Caesar, and have conversely been less preoccupied with the other side of the relationship. [5]

The cena dodekatheos related by Suetonius (Aug. 70) should be understood as a private event brought into the public domain by a hostile source: it is doubtful that much can be gleaned about Octavian's general views on his position vis-à-vis ruler cult (cf. 151-61). [6] Links with Sulla are forcefully asserted, and indeed require attention. Luke places considerable emphasis on Augustus' commitment to the performance of the census and the role it plays in the Res Gestae (214-23, 227-30), but does not address the fundamental difference between the choices that the two men made on that crucial issue (277). In the substantial section that he devotes to the Augustan period, Luke attributes much weight to the role of Numa in the political culture of the time, and indeed in the discourse developed and promoted by the princeps himself (206-14, 242-60). The mid-Republican 'roots' (9) of the image of Numa are evoked, but not quite explored. It is also doubtful that at any point during the Republican period anyone felt the need to construct a model of 'Roman priest-magistrate' (8): senior priests often attained senior magistracies, but the two domains remained carefully (and quite uncontroversially) separate from one another.

These specific points of disagreement are, first and foremost, testimony to the importance (and difficulty) of the material on which Luke has worked and to the innovative analysis that he has developed on a considerable number of fronts. They are also a consequence of a most welcome quality of this book: it is based on an impressive range of work on the ancient evidence, familiar and not, which is amply reflected throughout the text (and makes the absence of an index locorum all the more regrettable; the general index is wide-ranging, but not comprehensive). Luke has cast his net very widely indeed, and that is a major strength of this bold study. Students of the Roman Republican history and culture will find much valuable material in this book, and those who will set out to write new histories of the marches on Rome (ancient and not, I suppose) shall have to carefully engage with Luke's proposals on how to make sense of the deceptively complex act that arriving at Rome was - and is. [7]

[7] I am very grateful to Lauren Emslie for invaluable discussion and advice.