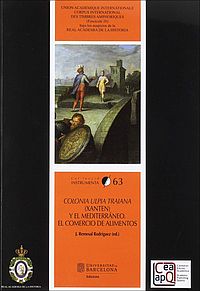 The challenges of studying ancient economics relate to the scarcity of data in the literary tradition and to the absence of ancient archives. Archaeology though has been increasingly contributing to provide lots of direct evidence, particularly in collective efforts such as notably the Centro para el studio de la interdependencia provincial en la antigüedad clásica (Center for the study of provincial interdependence in classical times - CEIPAC, University of Barcelona, Spain). Professor José Remesal leads CEIPAC, responsible for the bulk of the study of amphorae in Germany and Britain, establishing an impressive network of scholars dedicated to it from a variety of standpoints, disciplines and countries. If ancient history without archaeology was no longer conceivable, as stated Geza Alföldy as early as 1986, material data are essential for studying ancient economy and this volume proves the impressive advances on the subject.

The Roman military presence in this part of the Lower Rhine dates back to Augustus (13/12 BC) and the colony, established in 98/99 AD, thrived until the 260s. This coincides with the period of wider use of amphorae. Furthermore, the settlement was a large one, with a population perhaps of 10,000 people and with a stable civilian and military presence. Amphorae inscriptions, notably tituli picti and stamps, provide a lot of information, including relating to producing areas. Amphora shards contribute for further knowledge about ancient trade. The use of modern analytical tools enabled to produce many data, shown in lists and density maps, as well as the petrographic analysis, putting technology at the service of a better understanding of the historical issues.

There are several suggestive new data, such as the presence of as much as 6,82% of Eastern amphorae, during the short period from Augustus up to Caligula. Most of them are probably wine jars and the early presence and later absence lead Danile J. Martín-Arroyo Sánchez to link it to some kind of specific relationship with the Annona (77). Paul Marimon Ribas studies Gallic imitation amphorae, part of the overall copying of amphora types for selling similar products, produced in a different area. He observes the decline of the presence of garum amphorae from mid-2nd century, probably related to an increase in Germanic population, which did not hinder the importation of wine and olive oil though. German amphorae are different, in that they apparently imitate well-known Mediterranean types, such as Dressel 20, to carry most probably a local product unrelated to the original one. Dressel 20 originally carried olive oil from Baetica, while the imitation does not seem to carry olive oil, but something else, such as beer. Jordi Pérez González studies Richborough 527 amphorae from Lipari for carrying alum, used as a flocculant to clarify turbid liquids, as a mordant in dyeing, and in tanning.

Victor Revilla stresses the presence of wine amphorae produced in the coastal areas of Hispania Citerior (modern Catalonia, Spain) dated to the transition from the republic to the principate (200), attesting new social relations in several regions of ancient Roman settlement in the West. Wine and garum amphorae from Baetica are also well attested and prone Cesar Carreras to consider the Atlantic route as the most probable. Gades controlled the export of Garum from Baetica and Xanten imported it during the first century AD.

The most ubiquitous olive oil Dressel 20 amphorae deserve particular attention, not least due to its abundant epigraphic evidence. No less than 235 different Dressel 20 stamps appear in the analytical catalogue, as well as several graffiti, and a painted inscription (356). José Remesal produces a comprehensive study of the subject (275-420), starting by an overall description, followed by a study of Dressel 20 typological evolution and the key epigraphic data, discussed in detail. He emphasizes the classification of stamps by the supposed nomen. This enables to relate the people mentioned in the stamps. Considering the link of stamps to specific potteries or figlinae in Baetica, he proposes that excavating one of them is an important next step for a comprehensive study of the producing area. The same applies to digging an olive oil producing farmstead or uilla, for this will enable to check several current assumptions and to provide potentially enriching evidence.

The catalogue itself (309-383) offers many new data, such as previously unknown stamps, and family associations (societates). The study of the corpus (385-419) uses statistics, graphics, network presentation of the data by site and provenance (potteries and conuentus areas), as well as several chronological graphic network presentations. These include graphics relating to prosopography, showing families in different regions and periods and their presence in Xanten and comparatively also elsewhere. Among the several specific information, some are worth mentioning here. The predominance of the stamps of the societas of the Iuni Melissi, produced in a pottery in Las Delicias, in the conventus astigitanus, in ten different German sites suggest a special position of the family during the Severan and Post-Severan (193-260) period. If we consider all German sites, it is clear that exports from the three conuentus in Baetica were present, differing from site to site and fluctuating along the time.

In the overall concluding chapter, José Remesal dresses a comprehensive economic history picture, starting to relate military supply and private dealers, including personal networks. Turranis Gracilis, from Gades (nowadays Cádiz), was the first praefectus annonae and the archaeological evidence contribute to explain this exceptional position given to a Spanish Knight under Augustus. The archaeological data reinforce the Atlantic route to northern Europe, notably during the Principate. It also contributes to better understanding literary sources, such as Tacitus (Histories, 4,12,4), when he refers to Batavians, suggesting their control of lower Rhine navigation.

José Remesal concludes his analysis looking for the future, the ways forward in scholarly research, the challenges ahead for the new generations of scholars. First, inter and multidisciplinary approaches are useful for such a complex subject as economic relations, but I would add social relations in general. Then, further fieldwork, including digging in producing areas in the producing areas. Last, but not least, using the avenues open by information technology it is possible to interpret in better ways an ever-increasing archaeological database. The volume thus not only do contribute to our understanding of a complex subject, but also offer research avenues, guessing a creative outlook for historical knowledge.