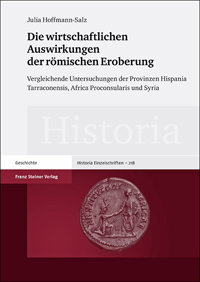 There is a long tradition of studying single provinces of the Roman Empire, as an exercise on the exploration of a comprehensive set of sources and issues relating to a limited region. There is also a well established research tradition relating to the study of modern countries during Roman times, such as Britain, Spain, Portugal or France, usually putting ancient provinces together or sometimes explicitly using modern borders of nation states as the area under study. Those studies are usually concerned with all aspects of the ancient studied area, from the economy to political and cultural issues. The economic study of single areas is a more recent trend, due to several factors, not least the explosion of archaeological data in the last few decades. Archaeological finds are so ubiquitous and all-encompassing that any knowledge of ancient times is no longer conceivable without the proper inclusion of material culture evidence. Still, the economic history of single provinces or of the ancient world in general for that matter, continued to be a unique challenge, considering the intricate issues relating to both theory and treatment of the data, particularly the archaeological one. Ground-breaking in this aspect has been José Remesal's study of the annona militaris and the economic relationship between Baetica and Germania, using a range of literary, epigraphic, and other written evidence, including papyri and most notably amphora inscriptions as well as other studies grounded on purely archaeological material, such as amphorae and pottery in general. [1] Since those early days, the literature on economic aspects of the ancient world has multiplied and is now common currency. It is even possible to say that since Moses Finley's death, his pessimistic assessment of the possibilities of the economic study of the ancients has been proven wrong, even if his theoretical stand against economic reasoning in ancient times continue to inspire not a few studies. [2] As in other aspects, the evidence is not enough to challenge a paradigm, for the real issue is not to gather data, but how to interpret them.

Hoffmann-Salz's study is thus tributary to all those previous debates and advances in the economic study of the ancient world. Her introductory words are clear in that respect, as she pays due homage to old (such as Rostovtzeff and Finley) and new (such as Remesal and Mattingly, to mention only a couple in both cases) students of those issues. In those first twenty five pages she stresses her main methodological and theoretical tenets: to use ancient literary evidence, as well as epigraphic and archaeological ones, to acknowledge but bypass the debate between primitive and modern features of the ancient economy, stressing instead connectivity and commerce (or rather movement of products) as her key concerns, in tandem with the role of the Roman power in those connections. It is interesting to note that the two key concepts for her are Eroberung, much more than conquest, it is the overtaking of a region, as if Roman power hovered over a region, changing it through Auswirkungen, the effects, consequences, impact, or the working out of the Roman action from above. Let's then turn to her narrative. She starts by describing each province, Hispania Tarraconensis (29-153), Africa Proconsularis (154-293), and Syria (294-440), followed by a comparative study (441-495) centered on continuity and change (441-475) and integration structures (476-494), and ending with a short comment on the aftermath of the Roman overtaking: economic change or decline? (494-496) Overall, the conclusion is also brief and ends by returning to Polybios (1, 3, 3-4) and to the remark that the economic resources of the provinces were used by the Romans to guarantee and perpetuate their control over the provinces. There is thus clearly a focus on the comprehensive description of each province (29-440), as the smaller comparative push (441-496) and very short conclusion are taken as much lighter endeavors.

The comparative analysis even though short is nonetheless instructive. She considers that in general the Roman overtaking changed the economic structures of all three provinces, but in all of them there was also a clear continuity from the previous periods. So that, the Romans used previously existing structures to foster connectivity and to supply for distant areas. More than revolutionary, the Roman action was evolutionary or incremental, using the unified empire as a magnet for economic activities. The main channels for economic integration were what she calls urbanization and the key economic role played by cities throughout, as well as the close relationship of elites and the political role of the state, in the shape notably of supply networks (annona Urbis, annona militaris), in the so-called redistribution mechanism or controlled trade. The res publica enabled elites and cities to flourish and to be in close contact.

The overall conclusion, even briefer, also stresses those three key moves: urbanizations, elite integration and supra-regional connectivity mediated by the imperial order. It also emphasizes that economic activities were not only rural and dominated by the elites, for it was also very much urban and the economic benefits percolated and trickled down to other social groups. Furthermore, she considers that the Roman economy was different from both mediaeval rank society and Modern bourgeois social structure. The Roman economy is characterized as grounded on the elites, through friendship and patronage schemes uniting imperial and local potentates, following such recent studies as Bang's tributary empire model. This move shaped a globalized Mediterranean economy, different from any other one in history (so avoiding the old primitive / modern models debate).

As we also point out elsewhere, the study of the ancient economy has greatly benefited from our contemporary understanding of the complexity of social relations thanks to the experience of our own times. It is thus no surprise that the main terms applied to the Roman economy are from our own modern experience, such as urbanization, specialization, economic spheres, work organization, globalization, all of them with no correspondence in Greek or Latin and even elite patronage has no exact equivalent, for patronatus has no such wide sociological meaning, referring as it does simply to patron rights. Such modern concepts however can foster a more complex understanding of the ancient economy and society at large. Julia Hoffmann-Salz offers us a comprehensive and well-balanced monograph, aiming at the specialists, but with an easy-reading narrative, avoiding the excessive use of jargon. It is thus a most interesting task to prepare a well-argued article synthesizing her main conclusions, so that her message reaches a broader scholarly public. In any case, all those concerned with the ancient economy, in general, and the Roman one in particular will benefit a lot from reading this well-written and argued volume.