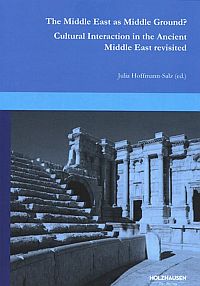 Recent years have seen a surge of studies aimed at reconceptualizing cultural and social changes resulting from political imperialism in the ancient world within frameworks that allow for interaction and mutuality - if not therefore balance or symmetry. This volume, collecting papers presented at a conference in Cologne in 2017, represents an addition to this strand of scholarship, adopting the common approach of "middle ground theory", as laid out by Richard White in his study of dynamics between indigenous populations, colonial empires, and settlers in the North American Great Lakes region. [1]

In the brief introduction Hoffman-Salz situates the middle ground in relation to other approaches that have been applied on the Middle East in the pre-Islamic period in recent years, notably acculturation, frontier-studies, social networks and critical geography/third-space. Among the distinctive qualities of White's work that are highlighted by Hoffman-Salz is the emphasis on negotiation, innovation, and even frequent misunderstanding between colonizer and colonized, resulting in an evolving common platform.

The introduction is followed by 12 case-studies in German, English, and French, addressing cultural encounters between colonizer and colonized, mainly in the Hellenistic period, but also some in the Roman era. Geographically the volume has an emphasis on the Levant, but covers also Egypt, Asia Minor and Mesopotamia, ending with an essay by David Engels comparing Seleucid Hellenization with similar, but otherwise unrelated processes of Sinification and Arabization. The emphasis on the Hellenistic period in general and the Seleucid empire in particular is a welcome change from the focus on the Roman period that has dominated much of this discourse. Most essays take coins, epigraphy, iconography, or literary sources written by authors who had a multicultural background themselves, as their point of departure. Such data-categories are well suited to appreciate the dynamic and multifaceted processes that the volume is addressing, and the volume is adequately illustrated for this purpose.

Some papers manage to employ the common theoretical perspective as a powerful analytical tool. Benedikt Eckhardt in his study of the gymnasium of Jerusalem and Corrinne Bonnet in her essay on the Greek institution of agon (festivals and games) in the Phoenician cities are especially successful in this respect, illustrating the processes of negotiation and (mis-)understanding emphasized by White. Achim Lichtenberger's conclusion that the theory is in fact of little use for the analysis of his particular material, local coinage in Seleucid Phoenicia, is similarly useful in explicitly discussing and demonstrating limitations with the approach. As not uncommon in collected volumes there are other essays that simply point out the relevance of the theory to the material at hand or leave it completely up to the reader to make the connection. In sum, however, the potential of White's theory for the study of the ancient Middle East is amply demonstrated.

The Middle East as Middle Ground is a timely contribution, which will interest scholars of the Hellenistic and Roman Middle East as well as those working with premodern cultural encounters in other contexts or in general. A question that remains with this reviewer is nevertheless how long it takes for a colonizer to become local? Are cultural frictions at the end of the Seleucid period, after two and a half centuries of Hellenistic rule, still best perceived as a meeting between settler and indigenous? Similar questions could be asked for the Roman period and other long-lasting empires in the Middle East. Clearly there is still room for theoretical as well as empirical work in this field.