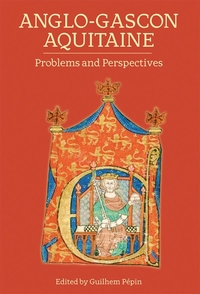 This collection of essays, edited by Guilhem Pépin, contains ten papers from a conference held at the University of Oxford in 2011. The conference marked the completion of the Arts and Humanities Research Council project The Gascon Rolls, which ran between 2008 and 2011 under the direction of Malcolm Vale (University of Oxford) and Paul Booth (University of Liverpool). The project's aim was to calendar the Gascon Rolls for the period 1317-1468. The rolls form the principal source for the study of the duchy of Aquitaine, which was a possession of the English crown from the thirteenth to the fifteenth centuries. Thanks to the project, and the continuations of it led by Frédéric Boutoulle and Françoise Lainé at the University of Bordeaux-Michel de Montaigne (2011-2013), and Anne Curry (University of Southampton) and Philip Morgan (University of Keele) (2013-2015), the significant majority of the rolls are now available online at www.gasconrolls.org.

Anglo-Gascon Aquitaine: Problems and Perspectives is the first book to capitalise on the publication of the Gascon Rolls. The chapters are arranged chronologically, although they fall into two broad thematic categories.

The first of these thematic categories concerns the administration of Anglo-Gascon Aquitaine. Though valuable, some of these chapters have a tendency to become too bogged down in the minutiae of bureaucratic processes. Françoise Lainé's detailed study of the Gascon Roll C61/75, which records the transfer of sovereignty to Edward III following the treaty of Brétigny (1360) and its subsequent transfer to the Black Prince, for instance, offers a close reading of the complex legal framework that surround these transfers. It also makes the interesting point that, for many contemporaries, the transfer of Gascon lands to the English crown in 1360 was seen as a return to the way things used to be done, rather than a new, forced arrangement. But, the chapter could have said more about the implications of these transfers for English sovereignty, and what ceremonial 'rituals of power' were performed to accompany these transfers (93). These are eluded to, but never fully discussed.

The same is also true of Guilhem Pépin's examination of the oath taking circuits of the seneshals of Gasony. Indeed, while Pépin reveals useful information about the format that these oath taking circuits took, and how they lengthened as the Hundred Years War progressed, more could have been said about how the frequent to-ing and fro-ing of the allegiance of some Gascon towns during this period impacted on the importance of oath taking. Again, this is eluded to in the conclusion to the chapter, but could have been more fully explored.

Other chapters concerning the administration of Anglo-Gascon Aquitaine are more successful at moving beyond narrow bureaucratic history. Nicholas Savy's study of the attitude of town councils (consulats) of Quercy at the beginning and end of the principality of Aquitaine (1360-1369) is particularly valuable. Savy's examination reveals that, despite only becoming an English possession for the first time as part of the expanded duchy agreed under the terms of the Treaty of Brétigny, Quercy was keen to work with English Anglo-Gascon officials for peace. As the 1360s wore on, however, these initially high hopes faded, and many in Quercy chose to revert their allegiance to the French monarchy. Such a display of pragmatic allegiance has important implications for how the loyalty of contested towns in the southwest of France is understood during this period.

Also of note is Robert Blackmore's investigation into the impact of the Hundred Years War on the Anglo-Gascon wine trade (chapter 7). Blackmore argues that the wine industry in the region was remarkably hardy despite the damaging effects of war, a series of poor harvests, and over-regulation by the English crown.

The other main category of chapters in the book are those focused on warfare in the region. Many of these chapters provide close examinations of individual military campaigns or encounters. In chapter 5, Covadonga Valdaliso offers a detailed analysis of Pedro López de Ayala's chronicle to suggest that historians and contemporary writers often wrongly view the Castilian Civil War (1351-1369) and the Battle of Nájera (1367) as fleeting parts of the Hundred Years War, leading them to overlook the complicated and long-standing domestic and dynastic factors which underpinned the conflict.

In chapter 8, meanwhile, Guilham Ferrand examines how Jean II, count of Armagnac (1373-1384), employed a small group of routiers to fight off English incursions which, while unpopular with some, demonstrates that he was not as ambivalent to English raids as his critics have suggested. Finally, in chapter 10 Pierre Prétou notes how Charles VII made use of Scottish troops when attempting to subdue Gascony at the end of the Hundred Years War because they held no stake in the political landscape of Aquitaine.

The final two military-focused chapters, those by Simon J. Harris and Andy King, are of particular value to those interested in English armies during of the fourteenth and fifteenth centuries. In chapter 3, Harris makes use of a 'full and detailed financial account', alongside a near-complete pardon roll, from the often-overlook war of Saint-Sardos (1323-1325) to offer the latest in a long line of valuable prosopographical studies that consider who fought in late-medieval English armies, how they were recruited, and on what terms they served (49). Harris' work offers particularly useful insight into the use of military pardons in the recruitment of English armies.

King's chapter (chapter 9), also contributes to this rich historiographical vein by examining those who served in English armies in Gascony during the late fourteenth and early fifteenth centuries. King's research shows that, while there were similarities to English armies that served in other fields of combat during the Hundred Years War, the nature of service in Gascony often involved lengthy stints as part of a garrison, which often attracted the sort of early 'professional' soldiers on whom much good research has been published in recent years (170).

Overall, this book thus has much to offer to those interested in the history of Gascony during the later Middle Ages, and is particularly valuable for the contribution it makes to our understanding of the administrative and military history of the region. There are more formatting and proofreading inconsistencies/errors than one would ideally like, the most notable of which being that, while some authors have institutional details included under their names at the start of each chapter, others do not. Likewise, it is odd, given that the origins of this book lie in the Gascon Rolls project, that a number of the chapters make little or no reference to the rolls calendared as part of the project (although this is perhaps a consequence of the fact that the conference from which the book stems took place in 2011, mid-way through the project). Nevertheless, the chapters which do focus on them reveal just how much of value can be found within the Gascon Rolls, and offer an encouraging starting point that will undoubtedly inspire others to make use of this new resource.