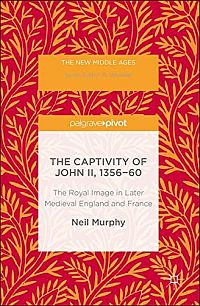 Historians have been generally unkind to John II of France for the time he spent in English captivity. Captured at the crushing French defeat at the battle of Poitiers in 1356, John spent the next four years as Edward III's prisoner. Typically, this period of French royal history has been portrayed as one of weakness and instability, in which John devoted too much time to the frivolities of hunting and feasting and not enough to the duties of kingship.

In his short study of John's captivity (consisting of just three main chapters), Neil Murphy offers a rather different picture. In contrast, "this book shows that the activities John II pursued during his captivity were of the utmost importance to his struggle with Edward III" (4). While accepting that indulging in royal pastimes such as hunting and feasting, for which John is so often criticised, was seen by some as a distraction from the main responsibilities of kingship, Murphy argues that these activities were also "vital to the expression of monarchical power" (30) in the fourteenth century and important in establishing John as a monarch of equal magnificent to his captor, Edward III, especially given John's recent failures on the battlefield. To support this, Murphy makes use of the often overlooked accounts of John's royal household while in captivity. Though these accounts only cover the second half of John's time in England, they closely detail what the French king was doing, wearing and eating while a prisoner, all of which provides abundant evidence to substantiate Murphy's claims.

For example, careful analysis of the French king's household accounts in Chapter 3 reveals the extent to which John "relied on fashion to assert his power" (48) during his captivity. This was especially true at public events, where John wore only the most luxurious fabrics and most expensive jewellery. This included "a golden brooch equipped with pearls, diamonds sapphires and rubies" (45), which entered John's possession in early 1360. Murphy also argues that maintaining an impressive royal household while in England was essential in supporting John's regal image. In particular, Murphy contends that by retaining a small number of English persons in the French royal household, as well as being open-handed in the gifts he gave to his household servants, John positioned himself as a potential rival source of royal favour to Edward III. Consequently, Murphy argues, "the Hundred Years War was not just fought on the battlefields of France; it was played out daily in the competition for status between Edward III and John II" (56).

Overall, Murphy's revised picture of John's time in England is a convincing one. At times, however, he focusses too narrowly on the theoretical ideals of kingship at the expense of more practical considerations. For example, Murphy argues that keeping a mechanical clock in his royal apartments at the Savoy Palace, the possession of which "considerably raised the profile of its owner" (53), was an explicit "display of royal power" designed to demonstrate John's "competence to rule" through his ability to maintain such a complicated timepiece. Though mechanical clocks were expensive and rare items in the later-Middle Ages, imbued with important symbolism, to argue that John's possession of one greatly enhanced his majesty is a stretch. It is impossible to gauge how widely John's possession of this clock was known, but it seems unlikely that even if it was well known amongst the French nobility it would have done much to ease their discontent at the devastating military losses suffered during the 1340s and 1350s, as well as the hefty ransom they now faced in order to secure their king's release. Consequently, while Murphy's re-evaluation of John's captivity is an important one, its findings should not be viewed in isolation from other work on the subject.

Contrary to orthodox opinion, Murphy also contends that it was John II, rather than his successor, Charles V, who should be credited with the renaissance that the French royal court underwent during the second half of the fourteenth century. Indeed, while Charles' reign is rightly seen as one of innovation, during which cultural exchanges between the French royal court and that of Richard II of England saw both undergo a monumental shift in style [1], for Murphy it was John's time in captivity that began this process. This was a result of John's desire to emulate, and where possible exceed, the magnificence of Edward III's court. Though at times Murphy is too quick to discredit Charles' contributions within this, he does effectively demonstrate that the origins of this process can be moved forwards a generation to the competition between John and Edward.

Though Murphy's most innovative work comes in relation to the French monarchy - unsurprising given that this is his main area of expertise - he also offers some useful evidence to reinforce existing ideas concerning the image of the English royal family at this time. He argues that both Edward III and the Black Prince were sophisticated in their treatment of John, laying on feasts, tournaments and other spectacles at which they could show off their royal prisoner while ensuring that they were seen to be treating him in a manner befitting his status. At John's entry into London, Murphy highlights how, rather than parading John as a prisoner in chains, Edward ensured he was "given the marks of honour customarily accorded to a sovereign ruler" (17). In particular, Murphy draws attention to the fact that John was "permitted to enter London on a white horse [...] a crucial marker of John's political status and [a symbol of] his sovereignty" (17). Though this does not radically alter our understanding of Edward's impressive chivalric reputation, it adds a further dimension to it by considering his treatment of royal prisoners, a subject often lost amongst works focussed on his love of the tournament.

Overall, Murphy's book is a valuable addition to our understanding of the royal image in later-medieval England and France. It could be argued that at just 103 pages in length, the findings of Murphy's research could have been just as effectively communicated through two or three article-length pieces. Nevertheless, by assessing the previously untapped household accounts of John II, Murphy constructs a picture of the French king's time in captivity which for the first time emphasises what he was able to achieve during this period, rather than focussing on what he was not able to do. In doing so, Murphy offers a more rounded picture of John's achievements, which will undoubtedly reshape how this important phase in the history of the Valois monarchy is understood for some time to come.