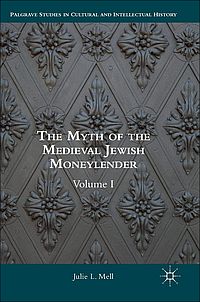 In this exhaustively researched, cogently argued, and fearlessly pursued study, Julie Mell questions a series of (what she considers to be) ingrained misconceptions regarding medieval Jewish moneylending and the roles played by Jews within the medieval European economy. Her book is extraordinarily ambitious in its objectives and scope, especially considering that it is her first monograph. Her discussion throughout benefits greatly from her expansive knowledge of European historiography, which allows her to pinpoint and evaluate what she has identified as chronic assumptions and problematic blind spots across generations of scholarship on Jewish and broader European economic history. This modest, space-constrained review is not an appropriate venue to present a comprehensive summary or even an overview of the book's argumentative trajectory. Instead, I will present my targeted assessment of its major accomplishments, which are considerable and deserve ample recognition, and do my best, with the significant limitations of my own expertise firmly in mind, to identify and question some of its arguably weaker claims, editorial deficiencies, and methodological complications.

I view the most significant, and potentially lasting, contributions of Mell's book as three-fold. First, it engages in a deeply learned and occasionally brilliant assessment of nineteenth and twentieth-century historiography on the roles of Jews in European economic history. Throughout the three chapters of part one of the study, Mell tries to demonstrate how many of the most eminent and influential historians and historical theorists collectively generated the scholarly trajectories that are responsible for shaping modern understandings of both medieval economic history and the prominent role commonly assigned to Jews within that shared vision. Second, Mell engages in a sophisticated and perceptive rereading of the medieval English evidence to illustrate how prior scholarship has overemphasized the wealth of individual Jews, the extent to which they engaged in moneylending, and their value to the English Crown. In pursuing this second objective, Mell presents a rereading of the English expulsion that largely supports Robin Mundill's revisionist examination of Edward I's Jewish solution. England is clearly the environment that Mell knows best, and, as a non-expert on the English Jewry, I found her handling of the evidence and argumentation compelling. Third, chiefly in Chapter 8, she reassesses both Christian and Jewish attitudes towards moneylending and usury to show that they manifested surprisingly similar concerns regarding the moral implications of using money in inappropriate manners. Mell uses this discussion to question the assumption that the medieval economy was imbued with Christian as opposed to common "European" (i.e., shared Jewish and Christian) values (building on her study of common Jewish-Christian economic practices in Chapter 7). 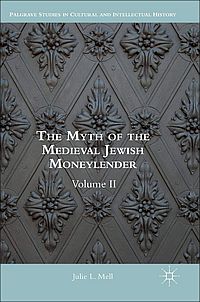 The undeniable value of these three major contributions is compromised to some degree by certain infelicitous editorial and methodological choices. Mell would have benefited from much more heavy-handed editing by Palgrave. No university press would have published a first book in this form. This study could have been (and perhaps needed to be) considerably shorter and, as such, could have been confined to a more manageable and readable single volume. The extensive historiographical overview presented in Part 1, while fascinating in its own right, made the book feel aimless and lopsided. Mell frequently revisited the most important take-aways from Part 1 in subsequent chapters, which led me to ask if it was truly necessary for the major goals of the study. In other instances, however, she seemed to rely overly much on Part 1, which made her historiographical critiques in Parts 2 and 3 less clear (e.g, her critique of previous scholarship on the emergence of French royal policies in Chapter 6). Furthermore, the chapters assembled in Part 3, while linked to Mell's overarching reassessment, often struck me as poorly integrated into the rest of the study. If I had been Mell's editor (or a peer-reviewer), I would have recommended downsizing Part 1 dramatically in order to accompany her introductory remarks and making Part 2 on the English case the core of the monograph, embellished by some of the historiographical observations from Part 1 and the non-English material from Part 3.

Apart from these editorial considerations, aspects of the book's methodology struck me as problematic. First and foremost, even if the English case is exceedingly well evidenced, it cannot stand in for other local environments. Mell reaches well founded conclusions regarding the distribution of Jewish wealth and extent of Jewish moneylending for England in Part 2 but then tries to apply those findings to the French case, largely on the basis of published sources, in order to critique the work of Jordan, Chazan, Langmuir, and other notable scholars regarding the emergence of policies within the French realms. It furthermore seemed to be a mischaracterization to assert that these scholars studied the evolution of the monarchy's Jewish policy without any reference to the ecclesiastical context. Mell's brave attempt to comment on the French situation was important to her effort to apply her rereading of Jewish moneylending to greater western Europe. Although she made ample reference to the development of papal policies regarding the Jews throughout her book, other regions were surprisingly absent. Southern Europe, with its substantial Jewish populations and archival riches, is hardly mentioned, and Mell makes no effort to engage with any of the extensive scholarship in English or other languages regarding these areas. This oversight is problematic because material from Southern Europe (especially the Crown of Aragon with archival riches that rival those of England), in my view, patently contradicts Mell's conclusions regarding Jewish moneylending and royal Jewish policies, such as the extent of money-lending, the value of Jewish taxation, and the servi regis principle. When she does refer to Iberia regarding expulsion, her reading seemed poorly informed and historiographically out-of-date. A critique meant to be as sweeping and systemic as the one launched by The Myth of the Medieval Jewish Moneylender cannot be based on such a limited pool of evidence without greater efforts to show explicitly how it should apply to other situations.

Another aspect of the argument that I found less convincing in light of our evidence from non-English areas was her notion that most Jews were not in a position to loan money and Jewish wealth was not valued by monarchies because only a small subset of the Jewish population was wealthy. Even if the taxation derived from Jews represented only a fraction of the taxation derived from other sources, this situation certainly does not preclude the likelihood that monarchies would seek to monopolize these incomes at the expense of jurisdictional rivals (baronial, ecclesiastical, etc.) on the basis of their special protective relationship with the Jews that, in turn, served to distinguish further royal authority. Indeed, even if we were to ignore extensive direct archival evidence of Jewish wealth and moneylending from the Crown of Aragon (among other environments), the vigor of the battles between royal agents and non-royal authorities over jurisdictional control of Jewish could not have been inspired by symbolic import alone and makes little sense if such lordship had not been not lucrative in some form or another.

As I read The Myth of the Medieval Jewish Moneylender, I found myself truly hoping that Mell had accomplished for Jewish history what R.W. Southern once did when he debunked the myth of the "School of Chartres". Much to my regret, I ultimately did not emerge convinced. This is a book to be simultaneously admired, approached with caution, and carefully deliberated. Mell's book raises numerous important and fascinating questions and musters a series of uneven challenges to understandings maintained by many scholars regarding Jewish and European economic history. While it did not convince me that we should rewrite every aspect of the received narratives on Jewish moneylending within broader medieval society, the monograph did encourage me to ask to what extent other microcosms within medieval European society shared in the dynamics she has so ably identified and explored within the case of England.

In sum, readers who manage to wade through these two volumes will discover much to ponder over and will emerge with a profound sense of our shared obligation to question our received conceptual frameworks and the ingrained assumptions that inhabit them.