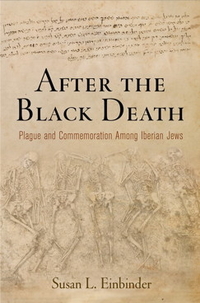 In this beautifully crafted study of responses to the experience of fourteenth-century violence, in general, and the Black Death, in particular, by Iberian Jews, Susan L. Einbinder makes two major contributions.

First, she unearths and subjects to the piercing analysis for which she is now famous previously overlooked or underappreciated sources, thus filling a notable void in the scholarship. It is worth pointing out the difficulty of simply locating these sorts of sources, to say nothing of the extensive research and thought that must have been required to develop the nuanced analysis she engages in throughout the volume. Commemorative Hebrew-language sources were neither produced in abundance nor, given Iberia's later history, given a good possibility of survival to the present day. This is a book enabled by chance survivals as well as the careful guardianship of sources by later generations of Sephardic Jews. At places (e.g., at 18 regarding liturgical responses to violence against Jews during the Shepherds' Crusade of 1320), Einbinder confesses directly to the reader that locating sources has exhausted even as indefatigable a researcher as herself. The dearth of sources obliges Einbinder to utilize a wide range of source materials, from liturgical laments and poetry to burial excavations and grave epitaphs, and innovative techniques of analysis (e.g., her application of various theoretical models of trauma or her fruitful comparison of Abraham Caslari's Tractate on Pestilential and Other Types of Fevers, in Hebrew, with Jaume d'Agramunt's Regiment de Preservació, in Catalan). It also explains why the book is heavily weighted towards the lands of the Crown of Aragon (and of Catalonia, especially), for which considerably more textual sources have survived. Perhaps by necessity due to the fragmentary nature of the evidence, the book is episodic and proceeds as a series of interrelated reflections rather than as a cohesive whole.

Second, Einbinder advances the daring and somewhat unexpected main argument that the individual and collective experiences of Jews during these traumatic episodes, to the extent that they can be reconstructed, did not necessitate the development of new modes of commemoration. Instead, Jews continued to rely on traditional forms of lament, not because the violence occasioned by the Shepherd's Crusade and Black Death was not traumatic, but apparently because these existing forms of commemoration were deemed sufficient. Despite what we might have anticipated, the extant evidence does not suggest that there was any sort of rupture engendered by an "enduring crisis of faith meaning, or language" (5). With this realization firmly in mind, Einbinder can engage in the subtle analysis that befits her maturity and deep experience as the leading literary scholar of medieval Jews. She is attentive to the problem of constructing a sense of collective trauma from individual reflections and is prepared to utilize or dispense with theoretical models as she deems appropriate (see, e.g., 126-28).

Following a brief introduction that reviews the state of the literature on the Black Death and identifies the dearth of work on the topics covered by the book, the first chapter conducts an examination of the violence during the so-called Shepherds' Crusade by the band of attackers known as the Pastoureaux. Einbinder engages in this examination as a means of establishing a "pre-plague" baseline of commemoration by which to assess the subsequent impact of the experiences of the Black Death on modes of commemoration employed by Iberian Jewish communities.

In Chapter 2, Einbinder turns to the plague period by considering one lengthy Hebrew liturgical lament (qinah) by Emanuel ben Joseph that illustrates how this mode of commemoration remained consistent with earlier examples. She is able to show how qinot like this one, while documenting individual cases, nevertheless served to represent "a communal ideal," thus illustrating the fluidity of "the exchange between public and private grammars of grief" (36).

Chapter 3 engages in the aforementioned enlightening comparison of texts by Abraham Caslari and Jaume d'Agramunt in which Einbinder is able to show how one exceptional individual (Caslari) sought to comprehend the phenomenon of the plague by drawing on theoretical and theological traditions in addition to his own personal experience of tragedy.

In Chapter 4, Einbinder briefly ventures beyond the Crown of Aragon to consider a fascinating series of epitaphs from Toledo, which provide a window onto the plague's impact on (and commemoration among) the major dynasties of this most important Jewish center within Castile. Here she is able to build on some of her work in Chapter 2 by considering (within a different context and using distinct sources) the intersection between public and private modes of trauma, grief, and commemoration.

Chapter 5 pairs archaeological findings (from 150 individual and six communal graves) with a Hebrew account by Huescan resident Hayim Galipapa in order to consider a devastating attack on the Catalonian Jewish community of Tàrrega in 1348 and the impact it had on both the perpetrators and victims (an approach again informed by trauma theory). The bones themselves bear witness to the violence of the attacks, and Einbinder is able to locate other texts to reconstruct the trauma experienced by certain Jews with links to Tàrrega. Nevertheless, her suggestion is not that this suffering, during and after the attacks, was universal. Instead, she remains highly attuned to differentiation and insightfully emphasizes the diversity of experience among Iberian Jewish communities.

Einbinder was brave to venture away from her comfort zone in France and delve into the Iberian context. As one might expect, there are some instances where the specifics of her training become noticeable. Catalan words and phrases are sometimes misspelled or mistranslated (e.g., 65) or lack the appropriate accentuation (e.g., Regiment de Preservació; at 57 and passim), and Catalan names are not always rendered correctly or consistently: e.g., Jacme d'Agramont/Agramante (57, 63, and passim), not Jaume d'Agramunt. There were some instances of geographic confusion, where Valencia is made to sound as if it were located within Catalonia (43). Although copy-editing a book of this sort (with so many difficult linguistic traditions in play) naturally represents a formidable challenge, it would have been advisable for Einbinder and Penn to show the manuscript to a scholar versed in Catalan language and history given the important role played by that region and its sources in the study.

These are but minor blemishes on an ambitious, compelling, and long overdue study. After the Black Death will expose students and researchers alike to a much-needed perspective on the phenomenon of plague (and the violence against Jews that it often occasioned) and its short and long-term repercussions for Iberia Jewish communities.