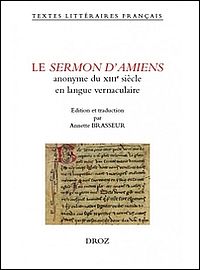 The "sermon of Amiens" is a medieval anonymous text, written in Old French and preserved in one incomplete manuscript. It is an invaluable monument of vernacular prose from the XIIIth century, presenting some interest for linguists, literature scholars and historians equally.

What we deal with is (as the author explains herself) "a handwritten text, carefully elaborated and based on the expected trilogy: the authorities (auctoritas), the reasoning (rationes) and the exemplary stories (exempla). It has conserved (...) all the marks of orality, typical for preaching, so it remains a sermon in its form. And its style, visibly reworked and improved, become more literary (...) and more adapted for a larger public".

And for the first time it has been edited in a really professional way. Annette Brasseur did a wonderful job preparing the edition, translating the text and providing exhaustive commentary and notes.

The volume numbers 410 pages and is divided into two main parts: the Introduction (pp. I-CXCIV) and the main body (pp. 1-216) called the Edition, but containing, besides the edition itself, also explanatory notes and indices.

The Introduction contains fifteen chapters of varying length. In the first chapter the manuscript is thoroughly described. In the second the editor presents exhaustively all the flaws of the two previous editions, especially the one by Murray. Her argument is sound and convincing. The third chapter discusses the title of the medieval document. As the title is missing from the manuscript itself, the editor obviously has to provide one. Each of the previous editors has proposed a different title, both considering the text as a sermon. Brasseur's choice of title refers to the solution proposed by Michel Zink in his work about the preaching in vernacular (Predication en langue romane).

Two following chapters: "Présentation du texte" and "Interprétation du texte" deal with the principles of the edition. Brasseur explains her editorial choices, describes the translation into modern French, the notes and the indexes that follow the edition.

The most substantial part of the Introduction occupies chapters 6-9. There the editor presents, in a very clear and exhaustive way, all the specifics of the language of the manuscript. In the chapters dealing with orthography, morphology, vocabulary and syntax issues we find the list of the particularities presented by this medieval monument.

After this linguistic survey, Brasseur proceeds to the description and analysis of the content of the text. This analysis is presented in a series of very relevant questions: 1) Has this sermon (long and unusual as it is) ever been delivered? 2) To what extent the actual preaching has been reconstructed in the text? 3) Why this particular vernacular sermon was preserved? 4) Who composed it? 5) And when?

Dealing with those questions Brasseur shows that she is not only a skilled editor and competent philologist, but also familiar with the problematics of medieval sermons. Those observations close the Introduction. It is followed by a bibliography.

The edition itself occupies only 79 pages. This fact alone illustrates how thoroughly written and exhaustive the whole volume is. The edition is twofold: on the even pages we find the edition itself and on the odd pages the translation into modern French. The Old French text is accompanied by a critical apparatus. In the translation the quotations (mostly biblical) have been marked and identified. There are also marks referring to the explanatory notes that follow the edition. Those notes occupy the next 155 pages. They deal with very diverse matters. Some of them refer to historical, religious and cultural issues. Some others are explanation of editor's choices or linguistic problems. They are of great help for the reader, particularly the non-specialist, who whishes to fully understand this unusual sermon. After the notes Brasseur has added an index of the personal names and a glossary. The later contains most of the lexemes present in the sermon. The final index lists proverbial phrases with references to their use in other texts.

At the end of the volume the reader will find four annexes: a list of parishes in Amiens diocese in 1301, a list of abbeys in this diocese in the middle of the XIIIth century, a list of its priories and a supplement of the glossary listing rare words, words used with a different meaning and, finally, metaphorical expressions.

To conclude: Le sermon d'Amiens is an impressive book. One can only admire the work done by its editor, the meticulousness and competence with which it was prepared. Thanks to Annette Brasseur the public at large can now benefit from this fascinating medieval document, carefully edited, translated and commented.