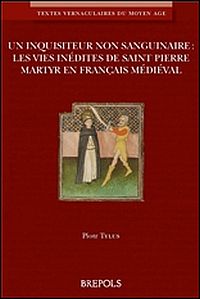 The last book by Piotr Tylus, is in a way, a logical sequel of his previous monograph, Légendes dominicaines dans la littérature française du moyen âge, edited in 2007. In that study he presented four hagiographies of Dominican saints - Dominic, Thomas Aquinas, Catherine of Siena and Peter of Verona - in their vernacular, namely Old French, versions. His latest work is limited to the last of those characters, Peter of Verona. And while the previous book is a scientific commentary about "manuscript tradition, transformations, diffusion and reception" (as the second part of the title claims), the last one is the edition of one hagiographical legend in its several vernacular versions.

The main point of this edition is in providing scholars with a good example of the medieval way of translating, adapting and reworking a hagiographical text. In the eight chapters of his book, Tylus presents fourteen manuscripts divided into eight groups corresponding to eight more or less different versions of the same legend. All of these vernacular versions are based upon the Latin narrative by Jacobus da Varagine and featured in his Legenda Aurea and are different from the translation performed by Jean de Vignay. This later version is the only one, among French translations or adaptations of the Legenda Aurea, to have been printed as early as the 15th century. Vignay's translation is also attested by many manuscripts. But it is neither the only existing French version of Jacobus' collection, nor the oldest one. It cannot even be considered the most faithful. The Author argues, in fact, that some of the versions present a very high level of adequacy.

For example, the one being the subject of the first chapter, contained in two manuscripts (ms. Le Puy, Grand Séminaire, [without shelfmark] and ms. BnF ms. fr. 20330) is, according to the Author "a good translation of the Legenda Aurea, even if sometimes too faithful" (20). Nevertheless, "the success of the Legenda Aurea translated by Jean de Vignay was huge; it had a considerable impact on the spiritual, intellectual and literary life in France during two centuries" (11). Meanwhile all the other versions remained almost unknown and have not been edited up until now.

Three of them are represented by one manuscript only: versions B (ms. Paris, BnF, ms. fr. 23114), D (ms. Douai, Bibl. Mun. 869) and L (ms. Lille, Bibl. Mun. 452). One version can be found in three manuscripts (from Cracow, Tournai and Florence). As for the remaining four versions, each of them is attested by two manuscripts. The Author claims that each of those eight versions is an independent translation or adaptation from the Latin source. Translation OR adaptation: this is an important point in Tylus' research, because the versions differ in terms of fidelity. Some of them are considered by the Author as faithful translations, while others are qualified as adaptations. Unfortunately, he does not propose any formal criteria to distinguish between these two types. Some implicit remarks suggest that omitting or adding fragments of the narrative is typical of the adaptation, for example: "this legend is an adaptation of Latin text, not a translation, among others, thanks to the fact that the French author introduces his own explications [...]. We are dealing here with adaptation again, because of some shortenings." (76)

Such criterion, while necessary, is clearly not sufficient. On the other hand, as the book contains editions of all these versions, the readers can form their own opinion on this matter. The fact is that with all these versions finally edited, we acquire an insight into the multiple methods used by medieval translators. This is probably the most important merit of Tylus' work. The other consists of describing in detail the adventures of a hagiographical narrative within one linguistical and cultural context.

To sum up, the book of Piotr Tylus is a valuable edition, prepared thoroughly and with care. The commentaries and notes accompanying the edition of each version contain important information about manuscripts and their history. There is however an issue, a technicality in fact, but somehow disturbing. The sigla proposed by the Author are not unambiguous. For example, the same siglum B is attributed to the ms. Paris, BnF, ms. fr. 23114 and m 41.s. Boston, Public Library.

Granted, these two manuscripts are analysed in different chapters: the third and the seventh respectively, but the chapters themselves are still the part of the same book. And while this ambiguity is not compromising the clarity of the study, it is regrettable that the Author did not take the opportunity to establish a system of identification that could be followed by other scholars willing to work on this material. It would have been better to propose a unique siglum for each manuscript: there is only 14 of them.

With this objection excepted Un inquisiteur non sanguinaire is an interesting and valuable book that can interest many medievalists.