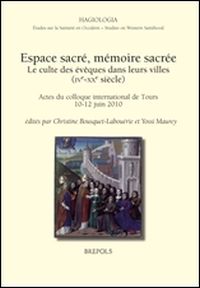 The book Espace sacré, mémoire sacrée. Le culte des évêques dans leur villes (IVe-XXe siècles) contains 19 papers preceded by an introduction written by the organisers of the conference, Christine Bousquet-Labouérie and Yossy Maurey. Several subjects dealt are considered. One of them is the veneration of bishops in the cities that they have been ruling, or in some other places, as was the case of St Adalbert, bishop of Prague, venerated in Gniezno, St Louis, bishop of Toulouse, in Hungary or St Martin, bishop of Tours, in Candes. Another topic is that ecclesiastical or lay authorities can induce a cult by a conscious and well-planned work of propaganda. Many papers deal with such situations, and the reader can even observe such practices of propaganda through the ages. Although most papers are about the actual veneration given to saint-bishops after their death, the book also contains some texts showing us the bishops during their lifetime. Here they are not presented as subjects of a cult, but as rulers, managers, political and spiritual leaders organizing the religious and social life of their fellow citizens, building their cities and establishing religious institutions.

This brief review of the questions dealt with shows how diverse they are. It seems that the subject of the conference proved to be quite large and produced a plethora of various studies. When dealing with such heterogeneous material, the editors were confronted to a difficult task: how to organize it in a volume?

The volume contains four chapters. The first one's title is Tensions and rivalries and it contains three papers. In the second chapter, Constructing ideas of urban communities, we find six papers. Chapter 3 includes four papers, and its title is Relics, Architecture, Images. And finally, the fourth and last section, titled Episcopal cults in Urban and Rural Communities, contains five papers.

All contributions are interesting and reveal sound research and analysis of several minute topics related to the cult of bishops and to the bishops' activity. The organization of the volume, however, is its weak point. It is difficult to see any crucial difference between the titles of Chapters 2 and 4. And, what is more, between those titles and the title of the whole volume there is little substantial difference. The fact is, almost all the papers deal with constructing ideas within Christian communities, be they urban or rural. And most of them deal with some episcopal cult. But there are also other questions that have not been put forward in the titles of the sections.

The work of propaganda, whether ecclesiastical or political, is an important, and particularly interesting, issue addressed in many papers. For example, S. Kahn Herrick, in her paper, "Apostolic Founding Bishops and Their Rivals: The Examples of Limoges, Rouen, and Périgueux," analyses three vitae of three bishop-saints, in which they are presented as deriving their authority directly from the apostles. All three hagiographical texts are the result of well planned efforts to promote those saints, in the "context of intra-city rivalries" (19). A similar case is presented by Y. Maurey, "Saint Gatien ou l'importance d'être le premier à Tours." Maurey describes the creation of a new liturgical office, undertaken by the canons of the cathedral in Tours. The cathedral was, from the beginning, dedicated to St Maurice, but the rivalry with the church of St Martin impelled the canons to a "liturgical forgery": St Maurice was replaced by St Gatianus, the first bishop of Tours and a liturgical office was composed in order to boost the new cult. The paper by S. Lutan-Hassner, "Candes-Saint-Martin: Sacred Space, Fateful Memory" presents another case of political propaganda using religious cult. Although Candes was not the episcopal see of St Martin, the legend tells that the bishop died in the church in Candes. Lutan-Hassner argues that the construction of the new church in Candes, dedicated to St Martin, was a part of an ideological program of the Plantagenet kings, fighting "not only for establishing a solid government in their western territories, but also to glorify their royal line" (233).

Many examples of medieval ecclesiastical propaganda presented in the volume can be compared with two occurrences of similar undertakings from modern times. A. Coutelle, in his paper, "Le culte de 'Monsieur saint Hilaire' à Poitiers au XVII siècle: un saint évêque à la reconquête de sa ville" presents the unsuccessful attempts to revive the cult of St Hilary as protector of the city. Despite the clergy's efforts, the saint-bishop lost the battle with St Ignatius of Loyola and St Radegund. The fact that some time earlier, in 1562, the relics of St Hilary had been taken from the church by the Protestants, was an important factor. Even the miraculous discovery of the relics and their return to the city could not prevent the decline of the devotion that had turned to other saints. The paper by G. Riou, "Quimper et les fêtes de saint Corentin entre 1886 et 1914: Renouvellement d'une dévotion" deals with a similar topic. The author describes the efforts of the clergy in Quimper to revive the cult of St Corentin, the first (half-legendary) bishop of the city. The means to achieve this goal were: the re-establishment of the relics, "saved from revolutionary turmoil" (259), the creation of the triduum of St Corentin, and the composition of songs in French and in Breton.

Among those case studies referring to authorities who more or less successfully tried to (re)establish an episcopal cult, the paper by T. Issartel, "Les saints évêques de Beneharnum (Lescar): enjeux religieux et politiques de la mémoire épiscopale dans la souveraineté de Béarn (XVIe-XVIIe siècles)" is particularly interesting. In this remarkable study, the author describes both political and religious work undertaken in Bearn during the 16th and 17th centuries. In the context of political and religious conflicts between Catholics and Protestants, the history of the diocese and its bishops has provided a surprisingly important tool to strengthen the authority of one party. Those wielding this tool, be they clergymen or laymen, did not hesitate to abuse the sources, and sometimes, as in the case of St Julien, their "findings" have even biased further historical research, to the point that some modern researchers have been duped by the presumed discoveries of their unscrupulous predecessors.

Another, and quite different topic appearing in the volume, is the relationship between a city and its bishop during his lifetime. When M. C. Miller ("Invoking Saint Zenobius, Embracing Saint John: The Bishop of Florence, his Palace, and the Growth of the City") argues that the urbanistic and architectural factors were crucial for establishing the cult of St John as the main cult in Florence, she is not referring to bishops of Florence as subjects of veneration but as organizers of the cult in the city. Such is also the subject chosen by M. S. Skinner. In her paper, "Respected Bishops and Holy Women: Caught between Cities and Ascetic Communities in the Western Empire (350-450 CE)", she presents eight bishops from the Middle Ages and describes their activity. Only one of them, Pope Damasus I, invests his energy mainly in building programs. The others were trying to organize the communities of Christians and, in doing so, had to deal with a issue very important in those times: the somehow controversial popularity of the ascetic life-style.

To conclude, the book contains many interesting papers, presenting several facets of the relationship between a bishop and his city. The most inspired are those, in my opinion, that shed light on conscious efforts of some authorities (political, spiritual, or even scientific) who aimed at creating a myth (often reinforced by religious practices) that was useful for political and sociological purposes.