Yuichi Akae: A Mendicant Sermon Collection from Composition to Reception 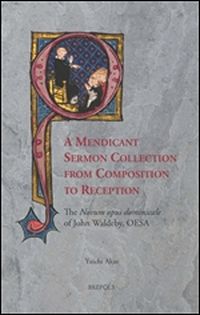 This book by Yuichi Akae will certainly interest all scholars studying medieval sermons, but also appeals to a more general readership. The author's purpose is to analyse the collection of sermons de tempore written by an Austin friar from York, John Waldeby. As "one of the very few sermon collections attributed to named mendicant friars from later medieval England to survive, Waldeby's work provides a precious window through which to observe how a mendicant friar (...) produced a sermon collection" (7).

This book is particularly valuable because of the broad context in which Waldeby's person and work is placed. Akae's description of the sermon collection and its relevant sources proposes to give a "unique vantage point (...) to observe (...) the inner working of the mendicant preaching system" (5) and to study the minds of the preacher and the recipients of the sermons. The author has choses the "vertical approach" (analysis of the single collection in its context and of its sources) as opposed to the "horizontal approach" (study of different sermons on the same subject) (6). As for the sources intended to help in the study of Waldeby's collection, the author has chosen: the catalogue of the library of the convent; a manual of preaching (ars praedicandi) and a classical text on rhetoric.

Part I of the book is titled "Setting the scene" and provides the broad context (historical and cultural) in which the work was completed. In Chapter 1 the reader learns about Waldeby, the main areas of his activity, and of his reputation. Akae presents the two extant manuscripts of the Novum opus dominicale and gives the full description of those volumes in Chapter 2.

This question is linked to the analysis of the relation between both preserved manuscripts, B and D. Akae rejects the opinion that the manuscript B is closer to the archetype than D. On the contrary, he argues quite convincingly that B is posterior and the sermons it contains were rearranged, while D presents the original composition of the collection. In the manuscript D the collection starts with an item that Akae considers to be not a sermon but a preface. It is followed by the sermon for the 14th Sunday after Pentecost. The unusual starting point of the sermon collection can be understood in the light of some remarks found in the preface. The date of the first sermon corresponds to the beginning of the "preaching season"; thus, Akae argues, "it is clear that Waldeby intended to address the lay public as well as the young friars at his convent" (55).

The rearrangement of the collection, witnessed by the manuscript B, consists in the deletion of the preface and in changing the order. By doing so "the scribe deleted the marks of the school-embedded use of the sermon collection and made it more suitable for general use by any type of preacher. (...) It is likely that Waldeby anticipated, or even intended, this wider use of his sermon collection" (78). Unfortunately, the hypothesis presented in the last sentence lacks any real proof. It is also possible that some reader of the sermons decided to remake the collection, which was originally not a model collection, with the purpose of making it a model for other preachers.

Chapter 3 deals with the status of the Novum opus dominicale which Akae believes to have been a very important text in the York library. In his opinion, this is proven by the fact that in the library catalogue this sermon collection (as well as the other one by the same author, Novum opus de sanctis) is listed with the denotation: ligatus. Akae argues that ligatus books were, in fact, reference books, intended to remain always in the library so that every one could consult them at any time. This hypothesis, however, does not seem to be adequately substantiated. It also seems somewhat hasty to state that "it is no exaggeration to say that Waldeby's sermon collections were the central text of the library of the Austin Friars at York" (103).

In Chapter 4 Akae studies the form of Waldeby's sermons. "Modern sermons", unlike the older form, are built of many components, some of them being indispensable, and others optional. Those components are identifiable by set phrases and marked by marginal notes.

Akae proceeds to a comparative reading of Waldeby's sermons and an ars praedicandi by Robert of Basevorn, with the title Forma praedicandi. This comparison should help to establish whether "both works are [the] product of the same intellectual milieu" (112). If both works turn out to be similar enough, each work could, in Akae's opinion, be used to better understand the other: "Basevorn's preaching manual would shed light on some of the aspects of Waldeby's sermons which cannot be known solely from his work (...), Waldeby's sermon collection could provide evidence that Basevorn's modern sermon form was spreading from Oxford" (113).

Akae manages to prove that there are quite striking similarities between the theory exposed by Basevorn and the practical implementation by Waldeby. But, as he admits himself, it is not possible to prove that Waldeby knew Basevorn's work. Thus, the only tenable conclusion is that both were influenced by the same ideas about preaching.

There is however one important point, on which, as Akae says, Waldeby "might not have followed Basevorn", i.e. the use of verbal (rather than actual) agreement in distinctions. This point is a crucial one in the discussion of language of preaching. Basevorn's comments on the use of both agreements (concordantia vocalis vs concordantia realis) by medieval preachers indicate that sermons were delivered to the laity in vernacular. It is more than probable that this was also so in the case of Waldeby's sermons.

In Chapter 5 the author studies Waldeby's use of the theory of Sign in its two meanings. The first is related to the interpretation of biblical narratives as figurae having allegorical sense. The other refers to ancient rhetoric and its mnemonic techniques as explained, for example, by Quintilian. In this second point the notion of "architectural mnemonics", as analysed by Mary J. Carruthers, is put forward. It becomes evident that in one of his sermons Waldeby is openly speaking about mental images that normally are used by orators to memorize their speech. In Akae's opinion, "Waldeby is not simply explaining the use of images for a mnemonic purpose (...) to a clerical audience and expecting them to use images only in their own mind", but he is also "communicating his messages to his audience - both clerical and lay - through images (...). Images must have been useful for the audience to memorize what was to be remembered" (251). Such an interpretation of Waldeby's use of "architectural mnemonics" is possible only under the assumption that the Novum opus dominicale was to be preached also to a lay audience.

In the last chapter Akae takes into account the works of other scholars concerning the distribution of topics in the sermons for Sundays. When mapped out, these topics reveal a general pattern in the composition of various sermon collections. It turns out that the Novum opus dominicale matches this pattern. The factors considered by Waldeby, as well as by other authors of model sermon collections, are: catechetical issues, the liturgical cycle, and the "mental calendar". The last point concerns the habit of using particular themata on specific days. The Author concludes that Novum opus dominicale generally corresponds to the "mental calendar".

In sum, Akae's opus is a very interesting contribution to the study of medieval sermons. One might wish to see more such works analysing the work of one preacher from so many points of view. The book is a complete and exhaustive study, dealing with all the important aspects of this monument of medieval literature and culture: the author, his milieu, his life and work and, last but not least, his public. In particular, the approach of studying the Novum opus dominicale in the light of other texts: first, the catalogue of the York library, and then an ars praedicandi written in the same epoch, is both original and successful.

Even if some conclusions seem to go too far, the reader can only admire the amount of work put into this study and applaud the author's intention to offer modern scholars an analysis of this medieval text so difficult to understand without its context.